Get limited time offer
How To Spend It  Watches

How Van Cleef & Arpels put a ballet inside a watch

In a feat of unmatched clock-making, Balanchine’s Jewels has been animated, scored, and put inside three new timepieces

The New Yorker described it as “the world’s first full-evening abstract ballet”. Forget fairy tales, dancing dolls, swans, sugar plum fairies, comatose princesses, dream sequences and anthropomorphic mice-fighting nutcrackers – Balanchine’s 1967 ballet, Jewels, “was a three-act ballet shorn of all that old-fashioned stuff, and therefore worthy to stand alongside the most prized art of the period, which was abstract art: Jackson Pollock, Henry Moore.” It was a landmark in the history of dance.

Balanchine’s company had just moved into the Lincoln Center and he wanted to choreograph a work worthy of this new home. The muse alit when, passing the windows of Van Cleef & Arpels on Fifth Avenue, he was struck by the beauty of the jewels. Thus the eponymous ballet was born. Freed from the burden of narrative, the three acts of Jewels express the essence of three different schools of ballet. “Diamonds” is an evocation of Russian imperial ballet set to the music of Tchaikovsky; “Rubies” uses the brisk, witty Capriccio of Stravinsky to evoke the modernity of the American Jazz Age; and Fauré’s Pelléas and Mélisande and Shylock are used for “Emeralds” to recall the romance and nostalgic tendresse of French classical ballet.

Bringing the inspiration for Balanchine’s masterpiece full circle, Van Cleef & Arpels has placed each act on the wrist in a trio of timepieces that use gem-setting, enamel painting and mechanical watchmaking to create an intense and glittering distillation of the ballet, complete with dancers and musical accompaniment. No detail is too small: even the curtains and proscenium arch of each watch evoke an appropriate real-life venue: the Opéra Garnier in Paris, the Marinsky in St Petersburg and the Lincoln Center in New York.

It is the most remarkable yet of Van Cleef’s poetic complications. At the press of a gem-set button, the curtain parts, a frieze of ballerinas moves before the eyes, while silvery notes of music emerge from between the diamonds that cover the case. But at only 20 seconds, the magical performance belies the decade of thought, care, ingenuity, trial and error that has gone into the making of this tiny ballet on the wrist.

At only 20 seconds, the magical performance belies a decade of thought, care, ingenuity, trial and error

The biggest challenge was to miniaturise an orchestra and place it inside a wristwatch, while still accommodating a timekeeping mechanism. “The issue was how to create sound and reproduce melodies that were quite complex orchestral pieces,” says Van Cleef’s CEO and creative director, Nicolas Bos. Musical watches tend to be of two types: either carillon or music box. In a carillon, gongs encircle the movement and are struck by hammers to play simple tunes in the manner of a peal of bells. But the range of notes possible was nowhere near broad enough, so a music-box mechanism was considered; this produced a greater variety of notes but they were qualitatively different, shorter and more abrupt than the resonating ones produced by the carillon.

In effect, it was like playing the piano one-handed when both hands were needed. “So we tried to see if we could associate both in the same case,” says Bos. Much of the 10 years was spent working out “how you can fit all that alongside the movement and ensure that it can play up to 90 notes”. The snappy Stravinsky actually fits 92 rapidly played notes into its micro performance; while the luscious Fauré makes use of only 49 but across a broader octaval range. “This is the first time a carillon and a music-box mechanism have been combined in one wristwatch,” says Bos, with understandable pride. 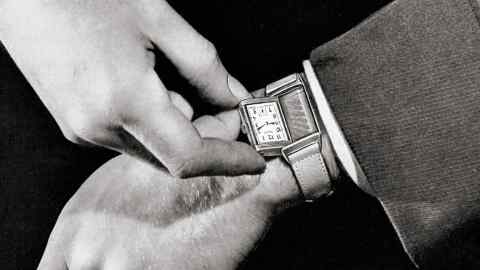 The next hurdle to be cleared was getting the music through the diamonds. “We would listen without the case and it was beautiful, and then in the case it was completely dead. To transmit resonance and vibrations through the case was a very long story. We worked with watchmakers, case builders, musicians, musical instrument makers, and composers. From the day we had the mechanism with imperfect sound to the day we felt happy with the final result was two or three years of constant rebuilding.” In the end a sealed inner case was placed in another case with space at the back to create a resonance chamber that amplified the sound. And there is a system of tiny airways and “gills” to allow the sound to travel out through the carapace of precious stones.

As well as the creation of mechanical music and the associated movement, what Bos marvels at is the concentration of artistic disciplines. “There is sculpture, painting, composition, performance of the music and representation of dance.” He pauses. “We are just missing literature… maybe next time.”