The dollar touched a seven-month low on Wednesday, reversing a trend that dominated much of 2022 as lower expectations of sharp Federal Reserve rate rises eased pressure on global markets.

The fall in the US currency, one of the steepest since the aftermath of the global financial crisis, came as US retail figures showed a 1.1 per cent year-on-year drop in sales in December — a bigger than expected fall that highlighted continuing weakness in the US economy.

“The trend has been very much in favour of dollar weakness, so it doesn’t take much to push it further in that direction,” said Alan Ruskin, head of G10 FX strategy at Deutsche Bank. “Any minor macro information can sway [the dollar].”

Expectations about the Fed’s future actions are influential in currency trading since higher interest rates drive up yields on US debt, attracting foreign inflows that boost the dollar.

The dollar index measuring the currency against a basket of its peers has fallen 10.7 per cent since September, the fastest rate of decline since 2009.

Data released on Wednesday also showed a 0.5 per cent month-on-month decline in wholesale prices — the sixth consecutive fall — further boosting hopes that the pressure on the Fed to raise rates is relenting. US consumer inflation has fallen consistently for five months.

The trade in the US currency became known as “King dollar” as it rose on the back of big Fed rate rises last year, but the recent data have bolstered market expectations that borrowing costs will not rise much further in 2023.

The Fed has already pivoted from 0.75 percentage point to 0.5 point increases and is increasingly expected to shift to 0.25 increments.

“We currently have traders putting a 5 per cent chance on a 0.50 percentage point increase at the next Fed meeting. It is not often you get that kind of certainty,” said Ed Al-Hussainy, strategist at Columbia Threadneedle.

The Fed next meets on February 1.

The fall in the currency has taken the dollar index from over 114 points in September to 101.53 by mid-morning on Wednesday in New York, its lowest point since May 31. However, the dollar recovered to 102.40 in midday trading after Fed officials warned against expecting rates to fall soon.

The sliding dollar has boosted emerging market stocks, with MSCI’s EM index rising 7 per cent this year, compared with a fall of 22 per cent in 2022. The group’s debt and currencies have also rebounded this year. 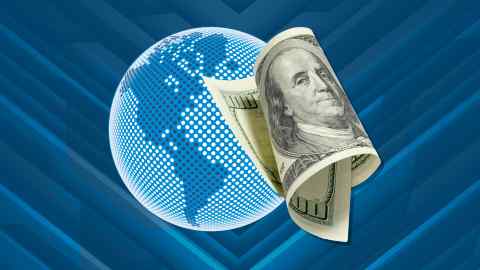 “The fundamental drivers regarding China reopening, softening inflation and better growth on the European front have contributed to this rally but the pivotal shift in markets at the top of EM investors’ minds has been the reversal of the US dollar.”

Most commodities are priced in dollars, so a weaker dollar helps cut import bills for emerging markets. It also makes it less expensive to service debt priced in the currency.