FT 300 list: the top US registered investment advisers in 2019

Median assets were flat for the first time since 2015, but client numbers rose

To view the final list, download the PDF in the link below or scroll down to the end of the article.

Volatility in the stock market over the past year has been a mixed blessing for investment advisory companies in the US — bringing clients to the door but keeping a lid on advisers’ assets under management.

Including dividends, the S&P 500 index posted a 4 per cent loss in 2018, only to flip to a 11 per cent gain in the first five months of 2019. That shift interrupted years of growth in managed assets at registered investment advisers (RIAs).

After increasing between 2015 and 2018, the median advisory company in this sixth annual FT 300 Top Registered Investment Advisers list managed $1.7bn in assets — the same level as last year. The overall AUM of the FT 300 advisers did rise, though, from $1.1tn to $1.2tn.

The top RIAs have been trying to build scale to serve more clients with a greater range of demands. Investors expect more information, more guidance and more of a personal touch, according to advisers recognised in this year’s list.

In response, FT 300 advisory companies have edged up the number of employees involved in providing investment advice — from working with clients to researching funds — from a median of 13 employees in last year’s list to 15 this year. Advisers are also investing in technology such as customer relationship management software and online portals for clients.

It is telling that 48 per cent of the FT 300 advisory companies reported that they are concerned about having adequate technological tools, making it the top challenge for the group. The second biggest challenge, advisers say, is hiring and retaining the right personnel, cited by 31 per cent of those in the list.

These elite advisers have also been pursuing mergers and acquisitions to gain scale.

Last year saw a record 176 mergers across the RIA industry, a notable increase from the previous year’s record of 147 deals, according to DeVoe & Company, a provider of consulting and banking services to advisers. And the company expects the pace of M&A to accelerate further.

This consolidation has rearranged the FT 300. Several of last year’s FT 300 members merged, including Bronfman Rothschild of Rockville, Maryland, which merged into New York’s Sontag Advisory.

Outsiders are benefiting from the dealmaking, too. For example, private equity group Hellman & Friedman, a shareholder in both Edelman and Financial Engines, helped orchestrate that combination.

In May, Goldman Sachs announced that it would acquire California-based United Capital, an FT 300 adviser managing more than $20bn, which had itself been built up through industry mergers.

Banks see RIAs as potential distributors of their products, say market insiders, while private equity acquirers appreciate the steady fees to be earned from advising clients.

Rather than making money from trades or sales commissions, advisers in the RIA model get paid by charging for advice, which includes managing a portfolio of investments.

But the job is more than being a simple investment manager, often calling for the adviser to be more of a risk analyst and even a life coach.

Payments are also more varied than investors commonly imagine. Only 56 per cent of FT 300 advisers get paid solely by charging a fee on assets managed — others get paid partly or entirely by charging hourly fees or flat fees for specific tasks, such as preparing financial plans or tax strategies.

The competition to enter this year’s FT 300 list was fierce, with many companies only just making the cut. The final list includes advisers from 37 US states, of which California has by far the most advisers — 49 — while, among cities, New York came in first place with 17 FT 300 constituents.

Advisers are generally bullish that they will benefit from continued market volatility, which can serve to boost investors’ appetite for advice. Many RIAs will seek to differentiate themselves from brokers by touting that they have to follow the “fiduciary standard” of putting their client’s interests ahead of their own.

Starting in mid-2020, broker-dealers must act in the “best interest” of clients when recommending investments, according to a regulation approved earlier this month by the US Securities and Exchange Commission, the markets regulator.

But this rule does not define what “best interest” means, and some consumer advocates complain that it falls short of the fiduciary standard to which regulated advisers are held. The debate is likely to remain contentious.

Our research suggests many investors are putting more trust in their advisers. Among the FT 300, the portion of assets where the adviser has complete discretion on how to invest, without needing client approval for trades, has risen to 86 per cent, up from 83 per cent two years ago.

The methodology for selecting the FT 300 is explained in detail in the box below the table.

This sixth edition of the FT 300 assesses registered investment advisers (RIAs) on traits desirable to investors. To ensure a list of established companies with substantial expertise, we examined the database of RIAs registered with the US Securities and Exchange Commission and selected those that reported $300m or more in assets under management (AUM).

The Financial Times and Ignites Research, the FT’s sister title, invited more than 2,000 qualifying RIA companies to complete a lengthy application that gave us more information about them. We added this to our own research into their practices, including data from regulatory filings. Some 740 RIA companies applied and 300 made the final list.

The formula the FT uses to grade advisers is based on six broad factors and calculates a numeric score for each adviser. Areas of consideration include adviser AUM, asset growth, the company’s age, industry certifications of key employees, SEC compliance record and online accessibility. The reasons for these are as follows:

• AUM growth rate can be a proxy for performance, as well as for asset retention and the ability to generate new business.

• Compliance record provides evidence of past client disputes — a string of complaints can signal potential problems, for example.

Additionally, the FT caps the number of advisory companies from any one state, based roughly on the distribution of millionaires across the US.

We present the FT 300 as an elite group, not a competitive ranking of one to 300.

This is the fairest way to identify the industry’s elite advisers while accounting for the companies’ different approaches and different specialisations.

The research was conducted on behalf of the FT by Ignites Research, a Financial Times sister publication.

Explore the Special Report
READ MORE
Inside the advisory company run by women, for women 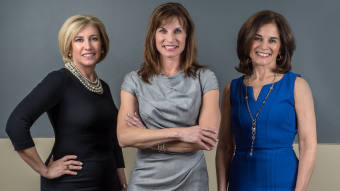