Nissan’s board in civil war over carmaker’s next leader

Kana Inagaki and Leo Lewis in Tokyo, Peter Campbell in London and David Keohane in Paris

Nissan’s struggle to fill the leadership vacuum left by the arrest of Carlos Ghosn has led to a boardroom civil war, as powerful internal factions wrestle for control of the Japanese carmaker.

A rift has emerged between the head of Nissan’s nomination committee and one of the company’s most influential senior executives, according to three people with knowledge of the situation.

Nissan’s board is expected to meet on Tuesday to discuss among other matters the future role of Hari Nada, the former head of legal who switched from being one of Mr Ghosn’s closest lieutenants into a ringleader of the investigation into him.

Despite signing a plea bargain with Japanese prosecutors, there have been increasing questions from executives at Nissan and Renault, its French partner, into why Mr Nada was allowed to remain involved in the probe on Mr Ghosn in recent months. Pressure for his removal is widespread.

Masakazu Toyoda, the former Japanese trade ministry official who heads Nissan’s nomination committee, and Hitoshi Kawaguchi, the executive in charge of government relations who played a pivotal role in the months leading up to the ousting of Mr Ghosn, have waged a battle on who should lead the group.

Ahead of a decision later this month, discussions about the new chief have centred on three candidates, including Yasuhiro Yamauchi, the former chief operating officer and interim CEO.

Mr Yamauchi had been considered a safe pair of hands due to his experience and as a sitting member of Renault’s board. Nissan officials in Mr Kawaguchi’s immediate circle were in favour of Mr Yamauchi as a caretaker chief executive to repair relations with Renault.

But Mr Toyoda has expressed reservations about Mr Yamauchi as a permanent CEO, citing concerns about his management ability and his recent rocky interactions with Renault, two of the people said.

A person close to Mr Kawaguchi denied he had supported Mr Yamauchi for the CEO position. Mr Toyoda declined to comment.

The rift has put the spotlight on Mr Kawaguchi, the global communications boss known for his close ties to the Japanese government and feared by executives for his broad remit in management issues. “He is not to be underestimated in his influence behind the scenes,” said one person who worked with him for more than a decade.

The other leading CEO candidates are Jun Seki, Nissan’s former China head in charge of its turnround plan, and Ashwani Gupta, an India-born former Renault executive who is considered a rising star inside Nissan.

The focus on these individuals could still change, these people warned, as the six-member committee seeks to reconcile differences between the interests of its old-guard company executives, its biggest shareholder Renault and its influential external directors. 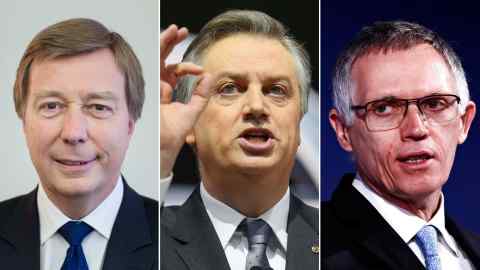 The growing tensions point to the challenge of finding an internationally minded CEO who has both the management and diplomatic skills to stem a collapse in profits and handle a potential four-way global merger with Fiat Chrysler Automobiles and Nissan’s alliance partners Renault and Mitsubishi.

Nissan recently concluded a 10-month internal investigation into the finances of Mr Ghosn, who was arrested and charged on allegations of financial misconduct. The former chairman has denied all allegations.

Senior figures inside Nissan, including former audit chief Christina Murray, have questioned why the investigation did not look into the role of Mr Nada and other executives, according to a person with knowledge of the internal probe.

Mr Nada did not respond to a request for comment. Nissan said it believed the investigation was conducted “rigorously and appropriately”.