The timing of Iqbal Khan’s arrival at UBS, the world’s biggest wealth manager, late last year could have been very unfortunate — the Covid-19 pandemic struck just three months after the high-flying Swiss private banker took up his new top job.

But UBS has so far weathered the biggest shock to financial markets in a decade better than most global banks, posting a 40 per cent surge in net profits to $1.6bn in the first quarter.

Powering the increase was a 41 per cent gain in pre-tax profits to $1.2bn in the dominant global wealth management division, where Mr Khan was appointed co-head alongside UBS veteran Tom Naratil.

With the bank’s advisers steering clients through the vicious market swings, the division made its largest quarterly profits since before the 2008 global financial crisis.

“Market volatility leads to more activity by investors,” says Mr Khan, who joined the Swiss bank from arch-rival Credit Suisse after a spectacular row with his former chief executive. “It also reinforces the need for quality advice.”

At Credit Suisse, the son of a Pakistani father and Swiss mother was a high flyer, earning the post of head of international wealth management from the then-chief executive, Tidjane Thiam.

Mr Khan delivered results. But last year he fell out with Mr Thiam in a personal dispute that culminated in a confrontation between Mr Khan and detectives hired by Credit Suisse to monitor him after he had resigned. Mr Thiam was later also forced to depart.

Mr Khan declines to talk about the dispute. He prefers, not surprisingly, to focus on his new job.

As UBS warned in its most recent quarterly statement, there are tough times ahead, with coronavirus still rife, the global economy falling into recession and investment clients cautious.

Mr Khan and his colleagues believe difficult conditions play to the bank’s strengths, notably its position as the world’s wealth management market leader, with $2.3tn in assets under management, far above competitors, including Credit Suisse.

But to make the most of this advantage, analysts say UBS needs to become more profitable by squeezing costs and generating more revenue from its global network. With wealth management revenues expected to shrink this year, the competition will get tougher, not least from leading rivals including JPMorgan, Bank of America and Morgan Stanley of the US, as well as Credit Suisse and smaller Swiss banks.

It is the 44-year-old Mr Khan’s job to help UBS navigate this storm. In pairing him with Mr Naratil, UBS chief executive Sergio Ermotti wants to combine Mr Khan’s undoubted energy with the avuncular 58-year-old American’s deep knowledge of UBS.

If Mr Khan proves up to the job of generating more profit out of global wealth management at the same as getting a grip on UBS’s complex and sometimes bureaucratic structures, he could be in line for an even bigger job: he is already spoken of as a potential future chief executive of the group. The 60-year-old Mr Ermotti, who has been at the helm since 2011, will be replaced by ING boss Ralph Hamers, who is 53, in November.

Mr Khan says that on joining the bank he was impressed by the power of the UBS brand with the global business elite. “I have to tell you probably my biggest wow experience on joining UBS was the opening of doors,” he says, adding that focusing on the clients behind those doors is the key.

Like much of the sector, UBS has struggled to control costs in wealth management in the past decade, in the face of simultaneous challenges to upgrade technology, improve regulatory compliance and invest in high-growth Asia.

Mr Khan and Mr Naratil have quickly attacked inefficiencies to raise margins, with an overhaul that has seen 500 posts cut from 23,000 in wealth management. Bureaucratic layers have been axed to reduce costs, accelerating decision-making and boosting profitability.

UBS executives say that while the speed of action owes a lot to Mr Khan it builds on profit-boosting changes Mr Naratil pushed earlier in the Americas.

Mr Khan and Mr Naratil have reorganised a decade-old ultra rich unit, which has served about 6,000 clients with at least $50m in assets.

The most active big investors among them have been switched to an even more exclusive unit — the global family office operation, which has direct access to the UBS investment bank. This division’s client list is more than doubling to about 2,000 customers who are not just very rich but are active investors.

Management oversight of other super-rich customers’ accounts has been decentralised from Zurich to offices around the globe to speed decision-making.

It is not the first time that a big bank has tried to expand the direct contact between investment banking and top wealth management clients. A rival private banker says such moves are risky, given the cultural differences between deal-oriented investment bankers and relationship-focused private wealth managers.

“If UBS now links investment banking and wealth management together, this is bigger than anybody thinks,” the rival banker says. “Nobody has done this [effectively] before and I don’t know whether it can succeed.”

Mr Ermotti said in January that the actions taken in wealth management will help deliver pre-tax growth of 10-15 per cent in 2020-22.

Even before Covid-19 this was an ambitious aim. Now the target looks even harder to hit, despite the strong first-quarter results.

But analysts think that whatever the eventual bottom line outcome, UBS wealth management is heading in the right direction at a faster pace than before.

As a leading Swiss bank analyst says: “UBS wealth management is a huge tanker. They can’t change everything in one night. But UBS people are saying, ‘Actually we needed this because the organisation was very bureaucratic and conservative.’ It was like a wake-up call and things are now moving.”

Mr Khan has made a good start at UBS. But he knows it will be a long haul.

Get alerts on Iqbal Khan when a new story is published 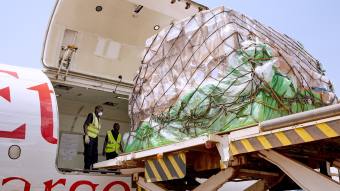 In this edition: how Tatyana Bakalchuk took Russia’s ecommerce throne, the philanthropists playing a crucial role developing a coronavirus vaccine, and why the wealthy should welcome an opportunity to reduce inequality