Pandemic, protest and paused Ant IPO hit hard but the territory still has a refashioned role

In the weeks leading up to the planned public offering from Ant, the Chinese fintech group controlled by billionaire and Alibaba founder Jack Ma, bankers in Hong Kong radiated confidence. Here, the argument went, was undeniable proof that the city’s future as a financial hub was secure.

After more than a year of social upheaval, disruption from the coronavirus pandemic and a national security law that raised fundamental questions about the city’s legal system, they appeared to have a point. Then, early last month, the dual Hong Kong-Shanghai IPO was suddenly suspended by Beijing, days before shares were set to begin trading, as China pushed ahead with regulations targeting online lenders and monopolistic practices in its tech sector.

Yet following this eleventh-hour tumult, few believe the city’s status as a major financial hub is in jeopardy, even as much of its financial sector continues to shift towards an even greater reliance on Hong Kong’s role as the primary conduit between Chinese and global finance.

“Hong Kong’s financial stature is bigger than any one deal, and much broader even than just equity capital markets,” says Jason Elder, a partner at Mayer Brown, the global law firm. He adds that issuance in both equities and debt capital markets has been resilient despite a year of unprecedented disruption. “The city’s status as an international financial centre remains strong,” he says.

Investors and traders admit that the delay for Ant had startled the city’s financial sector and forced a reshuffle for markets that had been using the planned listing — and the vast funds flowing into Hong Kong ahead of it — as a focal point.

“[Ant] was really going to bring in a bunch of money flow by year-end,” says one local hedge fund manager. “Everything was lining up around this.”

The delay for the city’s headline IPO of 2020 will make it harder to surpass rival bourses in New York and retain its listing crown — already a challenge, thanks to the tens of billions of dollars in issuance from special-purpose acquisition companies, or Spacs, on Wall Street. 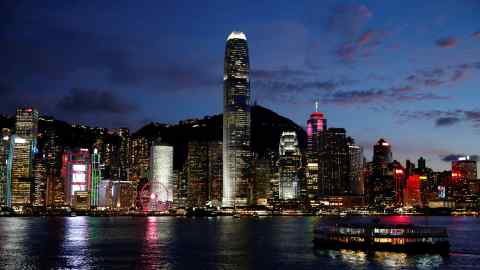 But for standard-issue IPOs, Hong Kong is still going toe-to-toe with its US rivals. In terms of funds raised by non-Spac IPOs, Hong Kong’s nearly $39bn from primary and secondary listings this year puts it just behind the $41bn raised from IPOs on the Nasdaq, the US frontrunner, according to data from Dealogic.

That puts it in striking distance of surpassing last year’s record $40bn made possible by a nearly $13bn secondary “homecoming” listing from Alibaba a year ago, which set the stage for more Chinese tech giants to raise billions of dollars closer to home in 2020.

Alicia García Herrero, chief economist for Asia Pacific at Natixis, says it has been a “magnificent year” for deal flow in Hong Kong’s capital markets. But she added that the city was shifting further away from its position as a global financial centre towards a role primarily as an offshore hub for Chinese finance: “In Hong Kong, the concentration of mainland companies is humongous.”

That is borne out by Financial Times analysis of data from Hong Kong’s financial regulator, which shows that mainland Chinese companies in the city now employ more than 2,100 licensed investment bankers. This is only a few hundred lower than the number working for Wall Street bulge-bracket investment banks such as Goldman Sachs and Morgan Stanley.

Meanwhile, rival Shanghai is gaining more traction as a destination for international investment banks’ China teams. Its tech-focused Star market has enjoyed a banner year as Beijing has pushed companies to tap local markets as it seeks to wean the country off its dependence on US capital markets.

Indeed, the majority of listings in Shanghai this year have been on Star, founded in July 2019. While the pause in Ant’s IPO may deprive China’s top onshore bourse of its crown jewel for a time, the deal is more a sign of the times than catalyst for change in its own right.

“We’re seeing Shanghai begin to transition from being primarily a hub for domestic banks to being a location where the international banks now see it as crucial to have feet on the ground if they’re going to win significant roles in some of these onshore deals,” says Alexander Owen, research manager at investment banking intelligence group Coalition.

Mr Owen says foreign banks’ focus on capturing more of the fee pool in Shanghai has intensified as China pushed ahead this year with an effort to make Star a “flagship destination” for Chinese technology listings and “a direct challenger to Nasdaq”.

But while Star has drawn more business onshore, Hong Kong remains of vital importance to the biggest and most powerful Chinese tech groups — even as they face regulatory pressure at home.

Investors were given serious pause this month when Beijing announced new regulations curbing monopoly power in the sector. This prompted a sell-off that erased almost $290bn in value from Hong Kong’s stock market as shares in the likes of Alibaba, Tencent and JD.com tumbled. Yet, after these losses, the Hang Seng Tech index tracking these and other top tech groups listed in the city was still up almost 70 per cent in 2020, reflecting the high concentration of China’s largest and fastest-growing tech groups listed in Hong Kong.

Ms García Herrero at Natixis says the city’s edge over Shanghai would remain, thanks to capital controls preventing the latter from rising to true global financial prominence. However, she adds that does not guarantee Hong Kong’s future will be as cosmopolitan as its past. “I don’t know what the future of Hong Kong is going to be but I am pretty certain that it won’t be a global financial centre. Hong Kong is now China’s financial centre, which is different,” she says.