Which second-hand sports car should you buy?

These four convertibles are designed for unlimited fun

The sun is up and it’s time to get behind the wheel of an affordable sports car. Choose carefully and you’ll own something guaranteed to provide relentless joy. Here are four classics to consider.

The entry credentials for any sports car are unambiguously firm. It must have a canvas, convertible roof. Ditch any notion of buying a front-wheel-drive car; you must have rear-wheel-drive. Having more than two seats suggests it is akin to a people carrier. Go for a manual gearbox. Though, an exception is made here for the Mercedes-Benz R129 SL simply because it is marvellous.

There are three reasons why the 987 Boxster is currently Germany’s hottest sports car ticket. You can buy a tidy example for around £16,000. Pay around £4,000 more and you’ll bag the facelifted second-generation car with lower miles. Few used sports cars drive with the perfection of a Porsche Boxster. The 987 was built using the scintillating flat-six, six-cylinder engine, whereas the lowliest of new Boxsters uses a gruff two-litre, four-cylinder, turbocharged engine. If you move a 987 on in time you’ll get most of your money back provided it is serviced properly. Get a Porsche expert to check the car’s provenance thoroughly. Demand all the service receipts and fully inspect the car inch by inch on a ramp.

Grab the smallest, circular kitchen chopping board you can find. Next, climb into your bath and snuggle right down – keep going. Now imagine you’re travelling at 70mph with the wind blasting around your face after being launched down a winding country road. If this is your thing, a Caterham Seven offers all the thrills you crave. A new, factory-built Seven 170S starts at £27,585. If you choose to assemble the car yourself you’ll pay £24,990 in kit form. Buying new is a smart approach as each Seven hardly depreciates at all.

But before you rush in, temper your excitement. Check for suspicious modifications and botched crash repairs. A documented history in a Caterham Seven is all. Confirm whether the car has been converted from race to road use. Investigate if the car was built in a shed by someone unhandy with a spanner. A top tip to bypass all that is to visit an authorised Caterham dealer. Each approved used Seven is subjected to an 87-point check by trained technicians. Be warned though – once you drive a Caterham Seven you’ll be addicted for life.

No car on this list exudes the astonishing value and bulletproof reliability of a Mazda MX-5. The first southern California-designed model is considered the purest of all the generations. Unless you are willing to pay strong money, it will be plagued by rust and mechanical gremlins. You are far better searching for an early 2009, facelifted NC generation fitted with the 158bhp, two-litre petrol engine. It has a sublime chassis, exceptional steering responses and a snickety gearbox that is perfection. Stick with the canvas roof and you can drop or raise in three seconds.

Budget around £10,000 for a second-generation NC with under 40,000 miles. Get a Mazda specialist to check for accident damage or youthful modifications. Pay attention to the oil change receipts. Mazda recommends oil changes every 12,500 miles. Lastly, seek out any rust like a team of forensics experts. If all is good you’ll have bought the most affordable and fun sports car on the planet.

Looking moneyed on a restricted budget is a folly. There exists one car, if bought from a Mercedes SL expert, that holds the potential as a family heirloom. Bookended by the prohibitively expensive R107 and troublesome R230, the Bruno Sacco-designed R129 suggests nonchalant prosperity. Resist the temptation to chase after an SL 500 with the V8 engine. £25,000 with six cylinders is enough. It’s possible to own a SL 320 from the late 1990s for that investment.

HTSI
Caw blimey! Behind the wheel of a legendary Gullwing 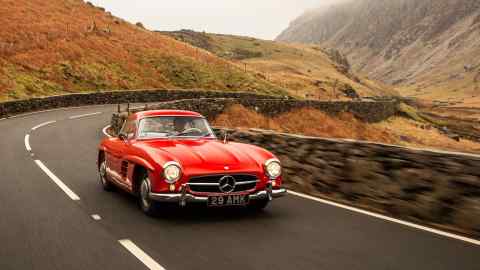 All Mercedes SLs from this generation were constructed like a metal fortress. Only the current G-Class retains the legendary build quality of this SL era. The six-cylinder version was the only one with the requisite manual gearbox, but it’s a top pick for classy summer cruising nonetheless. The R129 was fitted with an electronically retractable power canvas roof with the addition of a hard top to offer winter weather protection. Weak points include suspension top mounts and springs, the air conditioning system, anti-lock brakes, worn wiring looms, and oil supply tubes can blow a camshaft. Make sure the roof raises and lowers faultlessly. Always check these and other potential maladies before buying.