We use cookies (opens in new window) for a number of reasons, such as keeping FT Sites reliable and secure, personalising content and ads, providing social media features and to analyse how our Sites are used.
Manage cookies
Accept & continue
Special Report Watches and Jewellery: September
See all 8 stories
Watches & Jewellery Interiors

Established jewellery houses have always included some magnificent home objects in their collections. But lately, emerging independent jewellers, too, have been trying their hand at designing their own homeware.

Those who “love beautiful things to wear, like jewellery, also love beautiful objects for the places that speak about them, like their home or office”, says Silvia Damiani, vice-president of Italian jewellery house Damiani.

The business has dabbled in homeware since buying renowned Milanese silverware brand Calderoni in 2006. In 2016, it also added Venini to its portfolio. The Venice-based traditional glassmaker has itself created limited-edition vases in collaboration with Peter Marino, the New York-based designer who is best known for his luxury boutiques and interiors.

Ms Damiani is not alone in her belief that jewellery aficionados also have a keen interest in precious home accoutrements. These have always provided jewellers with a larger canvas on which to fulfil, through their artistry, their clients’ most extravagant requests. Notable ones include the gem-encrusted cage Van Cleef & Arpels created in the 1930s for the frog of an Indian maharaja, or the many personalised gifts writer Gabriele D’Annunzio commissioned from Milan-based jeweller Buccellati. Celebrity artist Theo Fennell trained as a silverware maker before turning his hands to jewellery, while still luring clients with his quirky silver sleeves for ketchup and mustard bottles and jars.

But it is a younger generation of jewellery designers who are crafting home objects to amplify their brands, attract new customers and add revenue streams.

Take a seat at Carolina Bucci’s London store to have a look at her made-in-Florence jewellery — starting at £350 for a single earring stud — and you will be served a drink in a colourful glass with golden swirls made by Venetian glassmaker Laguna B, laid on a coaster of Carrara marble, both available for purchase. Picture frames with Bucci’s signature Florentine finish are also for sale, as is the paper on which you will receive a personalised “thank-you” note after your purchase.

“I have moved into a larger store . . . to have more space to showcase my creativity, and to make my clients feel [like they are] at my home, rather than in a store,” says Ms Bucci. The home objects that she sells both in store and online are a welcome addition to the jeweller’s revenue stream. The correspondence cards made in collaboration with Pineider, a fine stationery supplier, are also sold in Pineider’s stores in Florence and Rome. This kind of collaboration piques consumers’ interest, according to the latest report on luxury buyers by Boston Consulting Group.

Other jewellers have ventured into crafting objects of their own to add touches of surprise to the homes of clients. The Italian designer Fabio Salini extended his jewellery signature range, made of rare elements, to homeware, including a sugar bowl crafted out of a shell. Meanwhile, the jeweller and collector of antiquities Glenn Spiro offers restored ancient objects bejewelled with precious stones.

For some designers, the success of their homeware ranges has accelerated their brand’s growth. London-based French designer Anissa Kermiche says her homeware sales have been a boon to her business.

It all started when she could not find the right vase for her apartment, so she decided to design one herself. Friends who noticed the nude female derrière-shaped vase on her dining table commissioned her to create similar pieces. They were followed by friends of friends, so that today sales of Anissa Kermiche homeware represent about 60 per cent of her business.

“It was a bumpy road,” says Ms Kermiche about the process of turning a single custom-made vase into a business, noting that she struggled to find a reliable supplier.

While many of her jewellery customers have also bought her homewares, her household objects, too, have drawn a larger clientele to her jewellery brand (sales of jewellery increased by about 40 per cent this year). “I get orders from people of all ages, males and females, retired or students, for wedding gifts or birthday gifts, collectors, art lovers, anybody and everybody,” says Ms Kermiche.

It was difficult to maintain loyalty with her jewellery customers — her jewellery ranges in price from £100 to more than £6,000 — but she says buyers of homeware objects (which sell for between £65 and £2,490) “keep coming back for more”.

Most importantly, the new venture has attracted investors’ interest in the brand, which Ms Kermiche plans to expand further.

Homeware, which has been introduced alongside fashion, accessories and jewellery, can also help maintain a steady cash flow for online retailers, such as Moda Operandi, the luxury fashion site. “April and May are the [peak] months for home purchases, and this is beneficial to Moda, as that is when the fashion calendar is slow,” says Lauren Santo Domingo, co-founder and chief brand officer of Moda Operandi.

This year, those spring months coincided with the height of the pandemic and Covid-19-related lockdowns around the world, during which attractive homeware may have added some sparkle both to customers’ homes, and to jewellers’ profits. 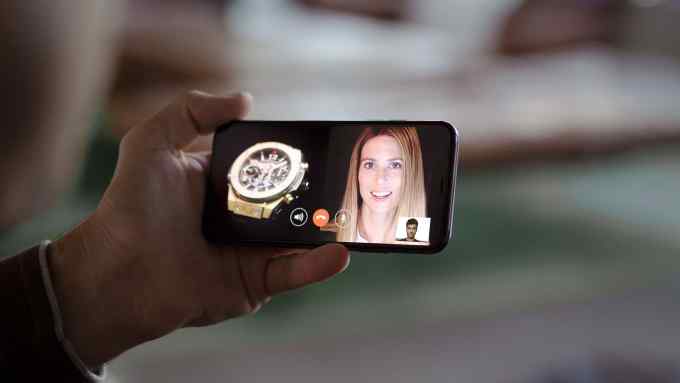