Anthony Vaccarello showed us the shoulder, Marine Serre saw the end of the world. Both were brilliantly on brand

The models aren’t getting any bigger at Saint Laurent, but at least they’re taking up more space. In the shoulders. Designer Anthony Vaccarello said that everything in his AW19 show for the Kering-owned label “had started from the shoulder . . . to give a sharp sophistication to the liberated impulse of desire”.

Indeed. The construction, set slightly behind the shoulder and then padded, and exaggeratedly high, was certainly alluring. I’m all about power tailoring at the moment. Vaccarello had channelled the spirit of the Eighties, and the energy of the house icons such as Bianca Jagger, Catherine Deneuve and Betty Catroux, to find his silhouette, and it seems so right for now. I felt the same surge of desirability at the Max Mara show last week, which also took an Eighties icon, Linda Evangelista, as its cue.

Here, the first look was the best one. Saint Laurent women are designed to look daunting, and this broad, in her herringbone overcoat with big lapels, barely there top and high-waisted satin trousers looked as dangerous as hell.

A small change, maybe, but this new shoulder shape, as well as the more avowedly Eighties sensibility seemed significant. A recalibration for the designer who succeeded Hedi Slimane at Saint Laurent in 2016 and who has endured endless comparison ever since. This collection looked to be tilting in a new direction. The trousers for example, with their pleat at the front, were a break away from the liquorice-stick skinny leg. The “Opium” embroidered velvets, as inspired by the brand’s fabled fragrance of that name, looked less rock chick and more luxurious. Where the last collection was Seventies glam rock and provocative, this felt more sensual and well-rounded than before.

But did that mean Vaccarello was done with the bestsellers — micro-mini cocktail dresses, hot pants, chiffon blouses — that have defined the brand in recent years? Lord no. There were still bountiful numbers of them here, and just as well considering Saint Laurent has just recorded its 20th quarter of successive growth and is set to hit €2bn in revenues this year. The brand’s bankers, I don’t imagine they’re going anywhere soon. But it was the other stuff — a tiered, ruffled skirt in black leather with a button fastening down the front, a sequin top with chinoiserie-style flowers, the coat, the coat, the coat that got my heart racing here.

While this was probably Vaccarello’s best show yet for Saint Laurent, there were still some bum notes. Why, if you’re bothering to show menswear, would you not extend the same new shoulder to him as well? Where were the Eighties influences for the guys? In a co-ed show in which the men barely got a look in, it seemed unfortunate not to give their looks more consideration. Instead they wandered by in standard skinny suiting — looking dangerously like an afterthought. Likewise, a long section at the end showing neon looks in black lighting which seemed to last for hours, mainly because I had no clue what I was looking at. Was that a faux fur shrug in neon orange, or a cocktail dress with a dayglo trim? Was it menswear, womenswear or something in between?

However, in light of recent competition (in the shape of Slimane who now offers his brand of waifish rock chick at the LVMH-owned Celine), Vaccarello’s efforts made for a clever counter narrative. This Saint Laurent show offered new excitements but was steeped in the sensibility of its founder and — essentially — it felt authentic and brilliantly on brand. A bit of competition has been very good for him.

Saint Laurent has been playing with its brand iconography and developing its story since 1961. Marine Serre, the French designer who won the LVMH prize in 2017, and who only made her runway debut in 2018, has managed to create one of the most distinct brands on the market in just over a year. Her “logo”, such that it is, recalls a crescent moon and is printed on bodystockings, leotards, leggings and under clothes to be worn like a second skin. For AW19 it went neon: on heads as balaclavas, over denim jeans and on to stretchy booties, too. Her brand is so all-consuming you can wear it head to toe.

Such a simple idea has been phenomenally successful. Serre’s team now numbers 30 and her FutureWear studio is now producing 10,000 pieces for a prestigious range of global stockists. But it’s as much for her outlook that the brand is gaining momentum. Since launching, Serre has championed feminine empowerment (her moon logo is the symbol of the woman), tolerance, environmental kindness and other ecological concerns that chime well with the times. She is careful about production, often using upcycled materials as part of her design. She’s earnest — she served vegan food and chicory flavoured coffee at her show — but never boring. Hers is a rare young voice that thrills.

Her AW19 collection, “Radiation”, lead us to an underground cavern lit with fluorescent lights and imagined a world where “ecological crises and climate wars are destroying the last remains of civilisation”. Her breakout survivors were a tribe of warriors whose style combined Apollo spacesuits, hazmat jackets, fluorescent yellow ball-gowns, driftwood jewellery, trash-bag dresses and “action-hero coats”. Yes, it all sounds a bit daft and Mad Max. But considering Paris is currently basking in the hottest temperatures yet recorded for the month of February, Serre may have a point. And while her futuristic fashion was extreme, it showed off a real skill for tailoring, form and innovation. I loved it — especially the “garbage” strewn chain, with its seashell accessory, that functioned as a ticket. If fashion is all about tribalism, and belonging, I want to be in Marine Serre’s gang. 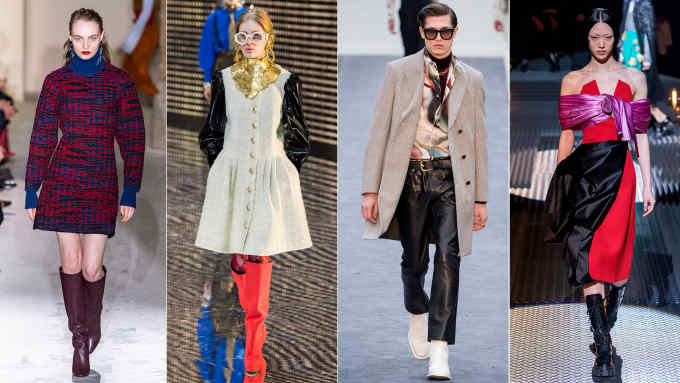