Kamel Mennour — in pursuit of perfection

Nothing could have foretold that one day Kamel Mennour would become one of France’s top contemporary art dealers. The cards were stacked against him — Algerian-born, brought up in the gritty Parisian suburb of Belleville after the family moved to France when he was a toddler.

His father was a housepainter; his mother worked as a cleaner. Two children and a divorce later, she worked day and night to raise her family and was rewarded when Kamel, a good student, went on to study economics at the Sorbonne. But then he quit his studies, after the masters level, for what had become his “obsession” — art.

“In the last year of my masters, I read more art books than those about economics,” he says.

“There was no background whatsoever in art in my family. My mother was totally devastated when I decided not to continue my studies,” he recounts, seated in Claridge’s Hotel in London, where he opened a small gallery facing onto Brook Street in 2016.

He is a powerful presence: 53 years old, tall and imposing, slim but strongly built with cropped hair, a greying beard and wire-rimmed glasses. He radiates energy, moving around in his chair during our discussion and punctuating points by slapping his hands together.

“It was terribly hard for me to go against my mother, who was so proud of my studies, but there was only one thing I wanted to do — become a gallerist,” says Mennour. “I had no network, no money!” Penetrating the closed Paris art world at the time was a daunting challenge. “When I started, a gallerist like Yvon Lambert was a hero — I wouldn’t have known how to approach him. I would have paid to serve coffee in his gallery!” he says.

He started out in the early 90s selling prints and lithographs in shopping malls — “You know, those temporary stands on easels in the aisles, all around France” — but at the same time he was reading everything he could about art. “For 10 years, it was as if I had disappeared,” he says. His luck came when a shoebox-size gallery became available in the rue Mazarine — but he needed FFR70,000 (about €10,000) to buy the lease. His mother and brother found the sum — and he was launched.

At the beginning of the century, ‘I and a few other young galleries were able to start reconstructing the contemporary art scene’

That was in 1999: this year, Mennour celebrates his 20 years in business. Today, he has three galleries in Paris, two on the left bank and one on the right bank in the prestigious avenue Matignon, as well as his London space.

His roster includes some 40 artists, among them many of France’s best- known creators: Tatiana Trouvé, Neïl Beloufa, Camille Henrot, Daniel Buren, Bertrand Lavier, François Morellet and Philippe Parreno. He also represents, in France, Alberto Giacometti, Douglas Gordon, Anish Kapoor, Tadashi Kawamata, Alicja Kwade, Lee Ufan, Martin Parr and Ugo Rondinone, among others. He has 45 employees, and this year he is participating in 13 art fairs, including the two Friezes, Fiac and the three Basel fairs.

“In my first gallery, I concentrated on photography — Larry Clark, Nobuyoshi Araki, Stephen Shore, [work that] was at the time not so well known in France — it was before Paris Photo and such fairs, and not so expensive. But my ambitions were larger, and I didn’t want to be known only for photography. So I stopped that and started bringing in young artists: Camille Henrot, Latifa Echakhch and Mohamed Bourouissa.”

Contemporary art was not in good shape in France at the beginning of the century, Mennour continues: “Fiac was held in a tent, it was far from the prestigious fair that it subsequently became under Jennifer Flay. Paris wasn’t Berlin, New York or London.” He claps his hands: “But this was also my luck, I and a few other young galleries such as Chantal Crousel were able to start reconstructing the art scene.”

So what was that path to success? “At the beginning I used to go to Fiac and memorise the names of the galleries and artists. I was totally focused on what I wanted, and obstinate. Then there are moments when you have to shift gears. In 2006 and 2007 I realised I needed a bigger space — I couldn’t keep my artists and attract more important ones without doing this.” He notes that he is a true perfectionist. “I look at the smallest detail for everything we do . . . and I am rarely satisfied.”

He is as bold in supporting his artists’ projects, some of them challenging. Last year Frieze had to reinforce its flooring to accommodate Tatiana Trouvé’s extraordinary fountain, “The Shaman” (2018), made of a tree stump surrounded with marble slabs, patinated bronze “towels” and water flowing from the mutilated branches of the tree.

This year his Frieze booth and London gallery featured Neïl Beloufa’s multimedia installations with light, sculpture and other materials. At Frieze Masters, he had Gina Pané, also a solo show. In the past he worked with Anish Kapoor on “Dirty Corner” (2015), the highly controversial installation in Versailles gardens which was subsequently daubed with anti-Semitic slogans, and large-scale works by Huang Yong Ping.

While he has never had a partner in the gallery, the most important person in his life is his wife Annika, mother of his five children, who are between five and 17 years old. “She believed in me,” he says, “gave me confidence in myself.”

Family is very important to him — on the day we met, he had dropped his five-year-old off for the first day of school before taking the Eurostar to London. And family is one reason he has not expanded more internationally — unlike, for instance, his fellow gallerist Emmanuel Perrotin, present in New York, Hong Kong and elsewhere. “Life is limited,” he says, making a small gap with his fingers. “Do I need, and do I want to do that? No! I have placed my artists in prestigious galleries abroad, my artists are shown by Blum and Poe, Metro Pictures or Eva Presenhuber, I get great satisfaction from that.”

Mennour’s firstborn son developed a bone tumour at 15 months. He was cured, and in 2015 Mennour created a charity auction to benefit the Imagine Institute, which conducts research into genetic illnesses in children. With other galleries who contribute works of art for the auction, to date he has raised a total of €14.5m for the institute.

I ask if there have been any disappointments. “Adel Abdessemed!” he immediately responds. Mennour was hurt when the Algerian-born artist, whom he had initially represented and promoted, dumped him for David Zwirner gallery.

“These things wound you, but they also construct you as a person. The best way to recover was to work . . . I bounced back 100 times better afterwards. C’est la vie!” 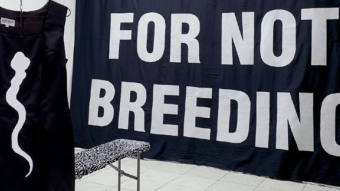