“It’s not exactly raining diamonds,” said one gallerist, “but we’ve had a very solid couple of days.”

Art Basel’s decision to have two preview days for its 2018 Hong Kong fair, before the public opening on March 29, made for quiet, uncrowded aisles, space and room to breathe. And to look at art. Several dealers confirmed that this Hong Kong event has a pace of its own: unlike the frenzied opening rush of some fairs, here buyers might come, look, leave, come back later to put their money on the line. Sales are made right to the end.

This is unlike Art Basel in Miami — with its infamous, indecorous early-hours stampede — or in its home city. “In Basel,” Iwan Wirth of Hauser & Wirth says, “if you haven’t sold a masterpiece in the first two days, people think there’s something wrong with it.”

He has little to worry about, having made a number of important sales very early on. At the other end of the scale, Hong Kong’s own Galerie Du Monde, in the Insight section, which is for galleries based in Asia and the Asia-Pacific region showing artists from the region, made a clean sweep of new works in the “Cyano-Collage” series by artist Wu Chi-Tsung, at prices from US$5,000-50,000.

The smash-hit sale of the fair to date is Lévy Gorvy’s Willem de Kooning, “Untitled XII” (1975), which immediately went to an unnamed private collection for a reported US$35m. At this sort of price, though, the gallery would have had a buyer carefully lined up: there is no one in the world for whom that’s just shopping.

Such star sales reveal that behind the apparent ease of art fairs, where wealthy clients seem to stroll the aisles buying on a whim, in fact most good galleries have put in detailed, strategic legwork in the run-up to the event. The serendipity that is the supposed strength of the art fair model does operate, but it is hugely helped by historic relationships and planning. So when Sadie Coles sold a painting by one of its newest artists, “Ein Innen!” by the German Kati Heck (€52,000), it was to a prominent Hong Kong collection well known to the gallery. But the same gallery’s score of a £150,000 commission for Scottish artist Jim Lambie — rather than a purchase of the thrusting, multicoloured metallic work on display on the booth — could hardly have been foreseen.

Heck’s work is figurative, neo-realist with a slightly surreal, drug-fuelled twist: once perhaps a risky prospect for the market here, but no longer. Most gallerists agree that not only are there far more Chinese collectors in the aisles this year — and Japanese, too — but that the confidence and sophistication of this market increases steadily. Yet while the story is all about the burgeoning of the local market, and artists from the region, the almost baffling internationalism of a fair such as this continues: at Pilar Corrias, for instance, a London-based Spanish gallerist sold a spectacular pair of lamps (“Large Happy Ending”, 2017, £150,000) by the French artist Philippe Parreno to a South American collector for his Swiss home. And they all crossed the globe to do that. Odd, when you think about it.

As always, the Art Basel fair is not the only game in town, and fine shows around the city include those of Sean Scully, presented by Timothy Taylor at the Hong Kong Arts Centre, Antony Gormley at White Cube, and Para Site art space’s group show A Beast, a God and a Line. In the brand-new H Queen’s building — whose hopelessly inadequate lifts caused enraged queues down the street — undaunted collectors made a sellout of Hauser & Wirth’s opening show, the first Asian presentation of American superstar abstractionist Mark Bradford (prices, sadly, a closely guarded secret). All but one work, the gallery proudly says, went to Asian clients. Serendipity? The lure of the new? No way. As Wirth explains, “This was the result of several years of nurturing relationships, even before we had a physical space here.”

The moral of the art fair story, it seems, is about making your own luck. 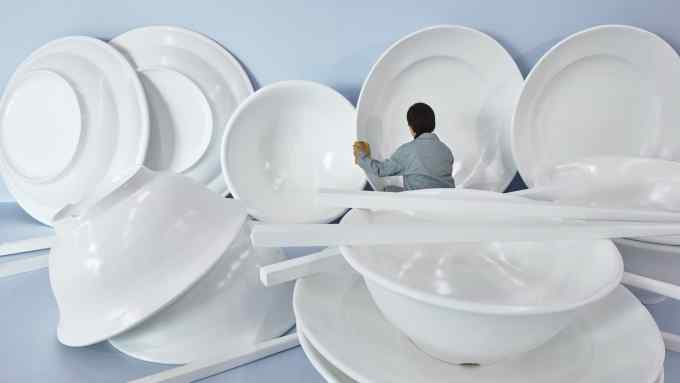