The Bank of Mum and Dad risks going out of business

It’s tough work bringing up a child. There’s the lack of sleep; the constant worry; the books unread; the career opportunities missed; the relentlessness of the school and after-school club pick-up and drop-off cycle; and then there is the money — the nonstop cash haemorrhage that comes with every kid.

Moneysupermarket.com puts the total cost from birth to the age of 18 at somewhere between £80,000 to £108,000 (apparently girls cost more). I strongly suspect their guesstimate is a bit high, as they’d like you to feel you should buy more insurance, but of course the expense is all worth it. There is no greater joy than a child.

However, my guess is that most parents see their children’s move into independent adulthood as not all bad. A chance to go on holiday during school term time, read a few novels and finally, finally, shovel a little cash into their inadequate pension schemes before it is too late.

What a shock it must be then, just as you have started wondering where exactly to start your cruise ship career, to find that this whole adult thing isn’t quite what it used to be.

Your child still needs your cash — and rather a lot of it to boot. The good news (misery loves company) is that you aren’t alone. A report out this week from Legal & General suggests that what has become known as the Bank of Mum and Dad (aka Bomad) is still very very active.

This year, says L&G, some 50,000 UK property transactions will be enabled by parents digging into their pensions for the deposit. A further 23,000 will be supported by a parent’s annuity income, and another 44,000 will be supported by parents releasing equity from their own homes. This, by the way, is the bit I think L&G is keen to encourage — they don’t do this research for fun.

Add it all up, and Bomad will be involved in around one in four UK housing transactions this year. That sounds nice. We all want our children to be settled. But here’s the rub.

Bomad is not actually a bank. If it were, the parents would be expecting the cash to be repaid — with some interest. Mostly they aren’t. In fact, Bomad is more of a Money Tree of Mum and Dad — or Motomad for short. That matters.

According to L&G, around one in five of the over-55s helping their children on to the property ladder are accepting a lower standard of living for themselves to do so. One in 10 say they feel less financially secure themselves as a result of doing so.

So what’s at the bottom of this epidemic of generosity? The answer will be obvious to most British people — the toxic combination of high house prices and pension freedoms.

Buying a house is not impossible for the young because mortgage costs are high. On the contrary, with interest rates still knocking around multi-century lows, borrowing is exceptionally cheap. According to Santander, buying a house is now cheaper in terms of monthly repayments than renting a similar property in every area of the UK (£723 vs £912 for the average first time buyer). 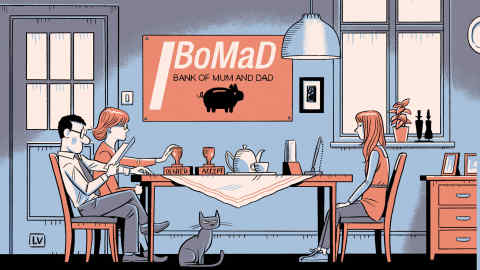 Buying a house is impossible because house prices themselves are so high. Mortgages might be affordable, but deposits most certainly are not. The Office for National Statistics reckons that “full-time workers could expect to pay around 7.8 times their annual workplace-based earnings on purchasing a home in England and Wales in 2017”. This implies the average first-time buyer deposit is about £50,000.

Not many under-35s have that to hand. However, thanks to pension freedoms (which subject to your marginal tax rate allow you to withdraw cash from your pension at will), an awful lot of over-55s now do. And I suspect they horribly underestimate the harm they will do to their long-term finances by handing it over.

However, if you take out £50,000 and give to your child to buy a house now, assuming the same level of income and returns, it will last only until you are 80. You can only mitigate by cutting your income by £200 to £1,800 a month — unless of course you can somehow generate a higher return.

You can play around with these numbers endlessly (the Hargreaves Lansdown website has a handy calculator) but the conclusion is inescapable: giving away lump sums early in your retirement has unpleasant consequences.

Clearly, lots of FT readers are perfectly capable of handing over deposits of £50,000 plus without even beginning to make a dent in their own lifestyles. This advice is not for them — though other busybodies will no doubt have advice to offer on creating resilience in young adults and other trying subjects.

For those who aren’t certain they will be left with an income that covers their needs and some extra, I offer this thought. There is a chance that your efforts to relieve your children’s stress levels by giving them money now will make them much more stressed later. What misery will your generous gift end up inflicting if, as seems likely at the moment, interest rates rise and house prices fall?

The deposit might slip away into the hellhole of negative equity and the mortgage payments flip from easy to unaffordable. Then what?

Might it not be better simply to hand over £200 a month to your kids to ease the financial strain and hope to be able to stop doing so relatively quickly, as wages rise and house prices at least level off?

You might also consider what happens if you run out of money at 80. Who will help? Will it be your children while they are grappling with work, mortgage and the £80,000 cost of raising each of your grandchildren? There’s a reason why financial advisers like to say that one of the greatest gifts a parent can give a child is their own financial security.

So here’s my suggestion. Santander reckons renting is £200 a month more expensive than buying. Might it not be better simply to hand over £200 a month to your kids to ease the financial strain and hope to be able to stop doing so relatively quickly, as wages rise and house prices at least level off?

Apart from everything else, it will preserve the capital in your pension — and hence your long-term income generating capability. If you need your money, it will still be there (and crucially still be yours). If you don’t, it is tidily ringfenced in a pension wrapper for your children to inherit tax free on your death, barring future legislative meddling. Nothing is guaranteed with this approach either — house prices could go up for ever. But it still seems a bit more sensible to me.