Why Ebola cannot be tamed in Congo

One year on, criticism grows of international effort that has failed to halt epidemic

Seven grave diggers dressed in medical smocks, surgical gloves and plastic boots lifted the coffin from the back of a truck and began to pick their way through more than 200 fresh burial mounds, whose simple wooden crosses cast long shadows.

Masika Kahongya was 19 and newly married when she died last month after contracting the Ebola virus. She now lies in a crowded forest clearing outside the town of Beni, in the Democratic Republic of Congo, a few metres from the grave of her three-month-old son, Innocent.

The mother and child are among 1,803 people killed in the Ebola outbreak since the first cases were confirmed near Beni exactly a year ago. Surpassed only by the epidemic that claimed more than 11,000 lives in west Africa from 2014-16, it is the longest and deadliest in Congo’s history.

Each of the country’s previous nine outbreaks since 1976, when the virus was first identified, occurred in remote regions and were controlled within three months. This time, thousands of health professionals have been deployed and more than 170,000 people have received an effective trial vaccine. Yet May, the tenth month, was the deadliest so far, and a further 349 cases were confirmed in July.

The accepted explanation for the failure of the international response has been to blame the low-level conflict that has destabilised eastern Congo for two decades. The presence of armed groups in North Kivu province made it difficult to reach victims and administer vaccinations, the country’s health ministry and the World Health Organization have said.

Some members of the response effort have been attacked and medical centres burnt down. But dozens of interviews with health professionals, aid workers, victims and their families paint a more complex picture of a response that has succeeded in some areas and failed in others.

On the red-dirt roads across the region, tens of thousands of people are stopped each day to have their hands disinfected and temperatures taken. In the new Ebola treatment centres, doctors deliver expert care.

The problem, according to the health ministry, is that up to 40 per cent of Ebola victims ignore official advice to visit such centres, and instead die at home and infect others.

“Community deaths are the worst scenario, and make it very difficult to control the epidemic,” said Gaston Tshapenda, the ministry’s senior official in Beni. “We need to break this vicious circle and establish trust with the community.”

Clovis Mutsuva, a local youth group leader, said the population had good reason to be suspicious. Last year, the government in Kinshasa, the capital, used the outbreak as an excuse to cancel a presidential election in opposition-voting Beni and nearby Butembo, despite recommendations from the health ministry and others that it would be safe to proceed.

“That’s the source of the resistance right there,” Mr Mutsuva said. Health workers with the government and WHO have treated communities poorly, he added, issuing ultimatums rather than advice.

There is also a perception some people have profited from the response. Hundreds of expensive off-road vehicles ply the region’s bumpy roads and “Ebola-business” has become a refrain among locals puzzled by the big inflow of money into their region.

“Where were they when our people were hacked to death by armed groups, or when thousands perished from malaria?” Mr Mutsuva asked.

That failure to build trust means doubts linger, even in well-educated families. “The response brings us nothing . . . just corpses and more corpses,” said Hussein Wabuzi, a former parliamentary candidate, whose sister-in-law died from the virus last month.

At his son’s bedside in the Beni treatment centre, Fauzi Muhindo was hopeful. He could see and talk to eight-year-old Kambale but they were prevented from touching. Like other patients, the boy was enclosed in a clear plastic treatment cube.

The technology was developed after the west African outbreak and allows medics to care for patients without risk of infection. “The rumours on the outside and the reality [inside the centre] is very different,” said Mr Muhindo. “The situation is so much better than I was told.”

Inside another cube, nurse Leoni Nduelo held the hand of a patient who gasped for breath. Unlike other health professionals, Ms Nduelo did not wear full protective clothing. She survived Ebola last year and is one of a small number of health workers immune to the virus.

While such commitment is common, a breakthrough against the virus remains elusive. Anne Marie Pegg, a Médecins Sans Frontières doctor who co-ordinates the aid group’s efforts in eastern Congo, said the issue was not the implementation of the response, but with the strategy itself.

Following the experience in west Africa from 2014-16 when the health services of Sierra Leone, Guinea and Liberia collapsed under the outbreak, the response in Congo has focused on creating a parallel health system where suspected cases are diverted into specialist facilities.

In hindsight, given that the Congolese epidemic has so far totalled far fewer cases — 2,593 in Congo versus 28,616 in west Africa — it was the wrong approach, she said. Instead, money should have been invested in building up existing health centres to test patients before sending confirmed cases on for treatment, Ms Pegg said.

“You can have the best Ebola treatment centre on the planet, but if people never get to it, it cannot help.”

Recent developments suggest a change may be under way.

In response to pressure from aid agencies and the threat that the virus could extend into new areas, the WHO last month declared the outbreak an international emergency, the highest level of global health crisis and only the fifth time the designation has been used. 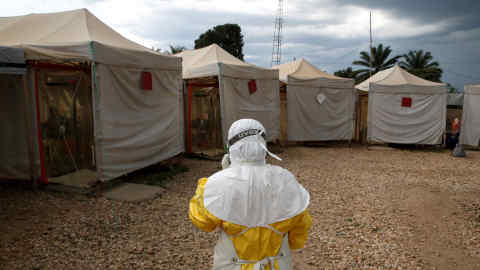 Three days later, Congo’s President Felix Tshisekedi set up a committee headed by Jean-Jacques Muyembe, a respected virologist, to lead the response. Mr Muyembe, 77, was one of two people who were dispatched to the Ebola river in 1976 to investigate the first known cases of the disease. He has previously been critical of the response and is expected to consider new approaches.

That could include the roll-out of a second trial Ebola vaccine being developed by US pharmaceutical group Johnson & Johnson. Its use was blocked last month by the then health minister who said it would undermine community trust in the Merck vaccine currently being delivered. The minister quit days after the Muyembe committee was established, decrying “interference”.

For experts such as Peter Piot, director of the London School of Hygiene & Tropical Medicine, this new approach could help turn the tide by allowing a vaccination programme in areas where the virus has not yet been detected.

This would create a “curtain” of immunised people around the epidemic, providing a window to bring it under control, he explained. “It is clear that the current strategy has not worked,” he said. “There is an immediate need for a reset.”

Video: Ebola: its history in numbers