The publication of a long-awaited report from Imperial College London that models the impact of coming out of lockdown has been delayed for several weeks, following criticism of the team’s methods as the debate around the UK’s coronavirus restrictions has become increasingly politicised.

Imperial’s MRC Centre for Global Infectious Disease Analysis told the Financial Times at the end of April that a new report, which modelled the effects that easing various lockdown restrictions would have on future deaths from Covid-19, was due to be published some time the following week.

However, the report has yet to be released, although its findings have been shared with government, according to two people associated with the Imperial team.

The delay comes as the rightwing press and some Conservative politicians question the need for such stringent lockdown measures in the UK.

A number of Tory figures, including former minister David Davis and Eurosceptic MP Steve Baker, have cast doubt on the Imperial team. They accuse the scientists of using an outdated computer code in an influential March report that predicted the UK could suffer 500,000 deaths during the pandemic if the government failed to take action.

The Telegraph newspaper suggested last week that Imperial’s modelling could be “the most devastating software mistake of all time”.

Personal attacks have also been made on Neil Ferguson, head of Imperial’s modelling team, who was forced to resign from the government’s Scientific Advisory Group for Emergencies (Sage) earlier this month after it was revealed he had broken social distancing rules.

A senior member of the team told the Financial Times that the report would not be made public for another few weeks, and then it would be released as a publishable scientific paper rather than a “preprint” as the famous “Report 9” had been on March 16.

“Examining exit strategies from lockdown remains a top priority of the team, and we currently are supporting multiple governments in their planning for this,” the person said.

“Given the increasingly politicised nature of debate around the science of Covid-19, we have decided to prioritise submitting this research for publication in a peer-reviewed scientific journal and will release it publicly at that time.”

I think one has to distinguish between science and scientists. They can have lapses in their personal lives — and these should not be interpreted as failures of policy

“I think one has to distinguish between science and scientists. They can have lapses in their personal lives — and these should not be interpreted as failures of policy,” he said.

Sir Venki added that the public had a false impression that the Imperial model dominated government decision-making in mid-March, when ministers decided to impose a lockdown.

“Theirs was not the only model considered,” he said, “and we didn’t need a model to know what would happen when this highly infectious virus arrived. Italy’s healthcare system had already reached its limits and they were begging us to act.”

Sir David Spiegelhalter, the statistician who is not a member of Sage but has attended one of its meetings, said there was a difficult trade-off between ensuring transparency around government policy and ensuring that scientists were not subjected to personal attacks or had their reputations compromised.

“I don’t necessarily think all Sage papers should be released immediately, because they are sometimes produced extremely rapidly, and it’s not fair on the reputation of the scientists involved that they are subject to possibly extremely harsh criticism,” he said.

“At the same time I do think that very important documents, such as the original March 16 Imperial report, should be public. Major analyses — modelling exercises and evidence reviews — should be made public as soon as possible.” 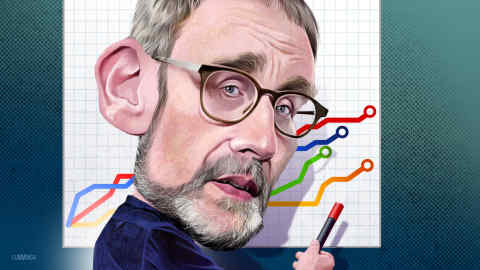 John Edmunds, professor of infectious disease modelling at the London School of Hygiene and Tropical Medicine, who also sits on Sage, defended Imperial’s research. He said the nature of the crisis meant work that would normally take months, or even a year, was having to be done in a matter of days, and that therefore “some shortcuts happen”.

He added that Imperial was not deciding government policy. “There are four groups independently looking at this. I think there’s a misperception here that Imperial are running the country. They’re not,” he said.

“There are lots of steps and lots of people contributing. Neil Ferguson is not making government policy. Please understand that.”

Video: Can Boris Johnson navigate the end of lockdown?