Emma Walmsley plots course out of ‘hobbyland’ for GSK

When Emma Walmsley vowed that UK drugmaker GlaxoSmithKline would no longer drift off into “hobbyland” and develop drugs without obvious commercial potential, the frank language from the company’s new chief executive took some observers by surprise.

But this blunt admission, in an interview with the FT last year, signalled Ms Walmsley’s determination to address the company’s unenviable reputation for producing fewer blockbuster drugs than rivals.

Next week, investors will learn about crucial next steps in her drive to raise the performance of GSK’s pharma division when her handpicked head of R&D, Hal Barron, gives his first official view of business priorities and direction.

His presentation is particularly significant because GSK’s chairman Philip Hampton is mulling a demerger of the consumer business — which makes products like Sensodyne toothpaste and the Horlicks malted drink — from the separate pharma and vaccines divisions in the coming years.

But this is predicated on a stronger performance by pharma, which in the first three months of the year saw sales rise by 2 per cent once the effect of currency fluctuations was stripped out, compared with a 13 per cent increase in vaccines.

Some investors were surprised by Ms Walmsley’s appointment as chief executive when the announcement came in September 2016 because her expertise lay outside the world of pharmaceuticals: she was in charge of GSK’s consumer health division for two years before her ascent to the top job.

Samuel Johar, who chairs the board advisory firm Buchanan Harvey, commented: “There is no other big pharma company in the world where neither the chairman nor the chief executive has a pharma background.”

However, a clear statement this year about her priorities for capital allocation, with pharma in the number one spot, has reassured some of the doubters. The share price remains below where it was one year and five years ago, but has strengthened significantly since the start of the year.

Moreover, colleagues say that since becoming chief executive, improving R&D has been her principal focus. A report she commissioned to assess GSK against competitors showed how the company did well on the number of drugs that received regulatory approval but much less so in terms of the value the medicines created for the company.

Analysts at Credit Suisse recently said they saw overall potential “of only £1.2bn of sales by 2022 from [GSK’s] pipeline . . . On all metrics this looks to be poor return on the ongoing £3.4bn annual pharma and vaccines R&D spend.”

Some expect Dr Barron will highlight additional resources for R&D next Wednesday. Analysts at JPMorgan said: “We believe the company could comment on the need for increased R&D investment over the coming years.”

GSK spent $5bn on pharma R&D in 2017, according to data provider EvaluatePharma, making it number seven in the top 10 pharma R&D spenders.

An update on a promising treatment in GSK’s pipeline for the blood cancer myeloma is also expected next week, potentially including information about additional trials to test its use at earlier stages of the disease. Myeloma is the second most common blood cancer and is currently incurable.

The company has signalled its interest in further acquisitions in the blood cancer field, according to one person familiar with discussions.

A key question, however, is how much money the company will be able to spend on such acquisitions while continuing to maintain its healthy 80p dividend — which Ms Walmsley this year named as a priority for capital allocation second only to spending on pharma.

GSK gave up a number of potential cancer therapies in 2014, as part of a swap with Novartis. However the appointment of Kevin Sin, former head of business development for oncology at Genentech, and the personal choice of Dr Barron as head of worldwide business development for R&D, is being seen as a sign of the company’s renewed enthusiasm for the field.

One person familiar with thinking inside the company pointed out that Mr Sin was “essentially the oncology business development guy at the leading global oncology company and Hal’s first appointment”.

However it is not just the detail of which acquisitions the company plans to pursue that concerns investors and analysts. They are also anxiously watching for evidence that GSK has a plan to identify and expedite promising drugs so they can more quickly begin generating returns.

Jo Walton from Credit Suisse said: “The investors are very clear what they would like to see from [Dr Barron’s] update: a clear statement of how Glaxo is going to improve its R&D productivity.”

Observers believe that one of Ms Walmsley’s earliest appointments — that of Luke Miels, one-time European head of AstraZeneca, as head of pharma — showed she recognised the need to improve the connection between the R&D department and the commercial side. 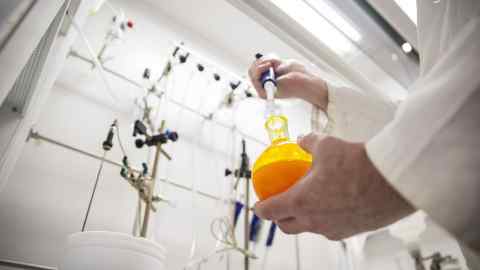 Ms Walton noted with approval that AstraZeneca had “a good track record of fast development”.

As it seeks to inject urgency and pace into the search for the next blockbuster drug, the overall culture of the company has come under Dr Barron’s microscope.

He joined GSK directly from Calico, an R&D biotech company and when she announced his appointment last year, Ms Walmsley singled out his achievement in building “a research organisation that uses cutting-edge technologies in drug discovery and development”.

Karenann Terrell, appointed last year as chief digital and technology officer from the retailer Walmart, may also play a role in boosting performance.

One person reported that she is a self-identified “disruptor . . . and makes no apology for that and that is being received quite positively by a lot of people who say it is about time we had that focus”.

From digital innovations, to the pursuit of cutting edge science: not just Ms Walmsley, but the company’s investors, must hope any last vestige of drug development as an academic pursuit at GSK will now be consigned to history — and that “hobbyland” can give way to high returns.

In May last year, UK investor Neil Woodford publicly took drug company GlaxoSmithKline to task for its refusal to consider breaking itself up.

“Investing in Glaxo has been a frustrating experience,” said the fund manager, who had held GSK shares for more than 15 years. “I have long believed that value could be created for the company’s shareholders if it split itself into separate, more specialised business units. The sum of the parts is significantly greater than the whole.”

As late as March 2017, the stock was one of Mr Woodford’s biggest positions, but within two months he had sold his entire holding.

A little more than a year later, the question of whether GSK’s businesses should be separated is back on the table. Three big shareholders have raised the issue with the board after the appointment of a new chief executive, Emma Walmsley, in 2017.

The investors are taking a gentler approach than Mr Woodford, with talks taking place behind closed doors. But investors are increasingly querying the sense of a business that makes consumer goods such as toothpaste but also develops pharmaceuticals.

One top 10 shareholder, who has raised questions about GSK’s future structure with chairman Sir Philip Hampton, said the “financial dynamics” of consumer and pharmaceutical divisions are “pretty different”. “The logic of this [splitting] the business is pretty clear. Philip is smart enough to know that. And he is smart enough to know he has to have answers to those questions.”