Langen Foundation: Tadao Ando’s building is an artwork in its own right

A curving wall of concrete marks the entrance to the Langen Foundation. Beyond it, a walkway dotted with pink cherry trees and lined by a basin of rippling water leads to a set of intersecting concrete shafts, one encased in glass. Designed by the master Japanese architect Tadao Ando, the building, located at a former Nato rocket-base outside Neuss near Düsseldorf, is an unexpected architectural gem amid the flat industrial Rhineland.

The Foundation, which opened in 2004, contains three large exhibition spaces, one unusually narrow, the others found in unlikely atriums below ground level. At the centre of the building, Ando designed a long, narrow gallery for exhibiting Japanese artefacts, known as the “Japan Room”; as a darkened box, it also doubles as a stage for multimedia work.

Here, over the past eight years, artistic director Christiane Maria Schneider has collaborated with private collections across Germany, including ALTANA Art (founded by German heiress Susanne Klatten) and the Viehof Collection (established by the family of the cash and carry billionaire Eugen Viehof). “We want to use and challenge the building,” Schneider says of her current show, Polyphon, which presents work from the Viehof Collection.

The 1,300 sq metre exhibition space has been given over to just six artists, including Danish-Vietnamese sculptor Danh Vo and Peruvian video artist David Zink Yi, so that each work has room to breathe. The colourful rows of hanging cloth in South Korean artist Kimsooja’s installation “A Laundry Woman” (2000), for example, unfold across an entire concrete shaft. Thomas Houseago, Marijke van Warmerdam and Corinne Wasmuht complete the line-up, which includes painting, sculpture and installation as well as film and video.

“With our contemporary shows, we want to show new non-European art, Asian art — because it’s the kind of work that fits with the spirit of Viktor and Marianne Langen,” Schneider says.

Marianne and her husband Viktor, who died in 1990, had been acquiring works of Japanese art, Asian art (from India, Cambodia, Thailand, China and Korea) and western modernism since the late 1940s. At its height, the collection comprised around 1,180 pieces, including 300 20th-century works: paintings by Picasso and Max Ernst, and such masterpieces as Piet Mondrian’s grid of primary colours “Composition with Red, Blue and Yellow” (1930), and Kandinsky’s “Beach Scene” (1909).

It was Marianne’s last act, before her death in 2004, to fund the Foundation by selling off an exquisite Jackson Pollock, “Composition” (1951). “My mother was looking for somewhere to house her collection,” explains Marianne’s daughter Sabine Langen-Crasemann, now president of the Foundation. “She came across Ando’s model, which he’d designed after visiting Neuss some years earlier. She was 89 at the time, and she said, ‘This is it! This is the biggest piece of art I’m going to buy!’”

Since that time, while the Japanese and non-European collections remain intact, many of the most spectacular works of European painting have been sold by the Langen family. To much criticism in the German press, the family auctioned a Picasso in 2014 for $22.5m, alongside paintings by Kandinsky, Braque and Dalí.

These days most of the collection is not on display: the majority of works are stored off-site and exhibited on rotation. With 350 pieces in the Japanese collection alone, this flexible model leaves Ando’s rooms uncluttered and allows for ambitious curating — one example was 2011’s Visual Stories: Picture Scrolls, Manga, Anime, which set off 13th-century scrolls with contemporary anime.

Viktor and Marianne always described themselves as “non-professional” collectors, acquiring art they wanted to live with. At the Bauhaus-style house they built in the 1950s in Meerbusch, on the outskirts of Düsseldorf, long glass windows looked out on to a sculpture garden, with Dubuffet’s “Le Bocage” (1970), an Art Brut sculptural hedgerow made of fibreglass and resin, and a stone circle by Richard Long. There was a Rothko in front of the piano; a little Matisse in the sitting room; Buddhist statues cluttering the hallway.

“It’s hard to overstate the importance of art in the minds of my parents’ generation,” says Langen-Crasemann. “At the end of the war, they were thirsty for culture.”

But it was in the 1960s, while travelling to Japan on business, that Viktor began to amass Japanese art seriously, and their collection soon reached from the 8th century Nara period to 19th-century painting. In 1979, he and Marianne bought a house in Switzerland which became a private museum of Japanese works, the windows blacked out for the conservation of scrolls and lit by 25-watt bulbs. The museum was closed in 2004, when the Foundation opened its doors.

“Since my mother’s death, we have professionalised,” Langen-Crasemann says. “We began to realise that the building is our most important work of art.”

“It’s a challenging and wonderful building to work with,” says Schneider, who joined the team in 2010, having worked for Dia Art Foundation. “We hang around four shows each year. Two of these are to show off the Japanese collection, but the others are entirely different — working with contemporary artists, such as Pae White and Olafur Eliasson, to present exhibitions adapted to fit the building.”

“I cried for every piece [of the original collection] that sold,” Langen-Crasemann says. “I’ve lived with these paintings since I was a child. But my parents were always looking forward — they were always seeking new work, from farther afield — and we decided to do the same, in spirit.”

READ MOREArt Basel 2018
We never, ever, close! Welcome to the 24-hour art gallery 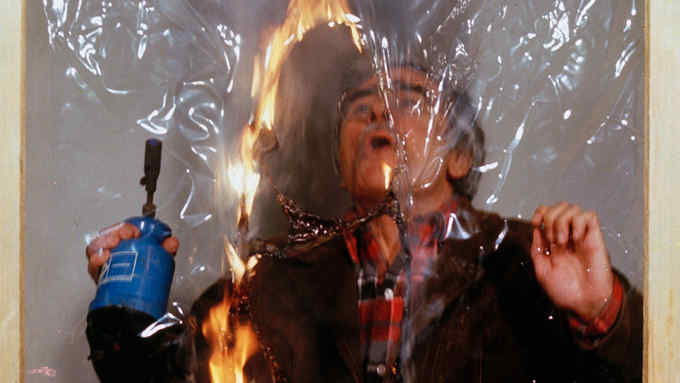