Coronavirus prompts a crisis for the travel industry

Until this week, there were still hopes that the business impact of the coronavirus would be limited. The travel industry was using as a benchmark the 2003 Sars outbreak, which hit 26 countries, killed 774 people and caused a six-month dip in global travel.

But as the first cases were reported in Italy and Iran last weekend, companies around the world began to cancel events from Cannes to California, rattling the $1.4tn corporate travel sector.

Airlines, already buffeted by a big drop-off in flights to Asia, have been hit particularly hard. On Friday, Lufthansa said it was slashing its short-haul flights by up to 25 per cent as demand slumped. British Airways parent company IAG warned that the uncertainty meant it could not provide a profit outlook for 2020; its shares fell 8 per cent and are down by a quarter in 10 days.

“If results had been last Friday, we probably would have given an outlook,” said chief executive Willie Walsh. “Asia appeared to have stabilised . . . but there has been a big change since Monday on Italy. [We] need to see how that impacts over a period of time . . . but it’s far too early for us to call.”

Amid a flurry of deep cleaning at their headquarters, hundreds of businesses, including multinationals such as BP, BMW, Orange and Estée Lauder, have suspended travel to countries with outbreaks of the virus and imposed quarantines on any returning from those regions. Others such as Nestlé, which has 352,000 employees, and L’Oréal, which has 86,000 employees, have gone further — cancelling all international travel for at least a month.

“We’re seeing business slow down, conferences and events being cancelled and that has a bigger impact on premium traffic which is a critical source of revenue for many network airlines,” said John Strickland, a London-based aviation consultant.

IAG’s Mr Walsh acknowledged that “corporates have introduced restrictive policies” but noted: “We’ve seen this before . . . We see those policies are normally in place for a short period of time.”

Bruce Wardinski, chief executive of Playa Hotels, an operator of Hilton and Hyatt branded properties, said: “I am frustrated that, in my belief, the coronavirus may cause people to stop travelling, which may affect our 2020 results. The only solace I get when thinking about all of these frustrations is that they all have one thing in common: they are temporary.”

Yet is hard to know how much confidence to draw from travel executives relying on the passing of time, given how slow the industry has been to grasp the seriousness of this crisis.

While Mr Walsh is sanguine about the impact on IAG, he is more bearish on the fate of some smaller competitors, arguing there is “absolutely no doubt there are airlines out there that can’t survive this . . . It’s going to accelerate the demise of a number of the weaker players in the industry.”

Norwegian Air Shuttle lost almost half its equity value this week. EasyJet on Friday froze recruitment and scaled back investment in an emergency effort to protect profits from the weakening passenger demand. Similar moves by Lufthansa and Dutch carrier KLM, part of the Air France-KLM group, were taken earlier this week as well as at Fraport, the operator of Frankfurt airport, Germany’s largest transport hub.

Ancillary businesses have been hurt too. The airport concession operator SSP said that the drop in passenger numbers would reduce group revenue by up to £12m this month while British American Tobacco warned that there had been a dent in sales of duty-free cigarettes.

The international airline trade body had already warned that global air travel demand could fall for the first time in more than 10 years, cutting the industry’s revenues by almost $30bn. But this was based on the impact of coronavirus on Asia, before it had started to spread more widely.

Mark Manduca, an aviation analyst at Citi, wrote in a note that the volatility of last week should not come as a surprise. “Even at times of widespread health, airlines have barely three weeks of visibility in their corporate bookings and only around six weeks in their leisure demand,” he said.

He noted too that there are a “kaleidoscope of questions”: Will parts of airspace be shut in the coming weeks? Will bankruptcies increase? And will corporate travel ever truly recover again as companies use this outbreak as an opportunity to finally realise their cost initiative drive towards virtual meetings?

Nearly two-thirds of companies responding to a lightning poll of more than 400 businesses conducted by the Global Business Travel Association, a trade group, said they had cancelled at least a “few” meetings or events in the wake of coronavirus, while a fifth had cancelled “many”.

With more than 230 trade shows cancelled or postponed, according to a survey by the German Trade Journal m+a messemedien, insurers are facing payouts, although Munich Re said on Friday that the amounts were not yet “significant”. IHIF, the world’s largest hospitality industry conference, which was supposed to open on March 4 in Berlin with 2,400 delegates, was postponed on Friday, while its sister travel trade event ITB was in talks with the German authorities about proceeding. 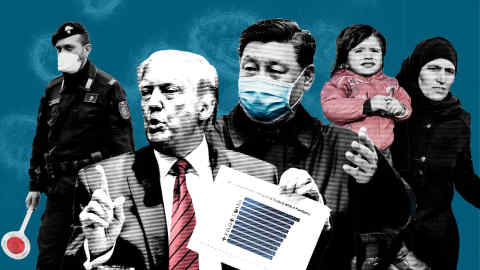 The Swiss government took matters into its own hands by banning all events involving more than 1,000 people, cancelling the Geneva Motor Show and Basel watch fair, while Facebook’s F8 developers conference scheduled to take place in San José in early May was also cut.

“Global companies realise that sending hundreds of people to a global event is a bigger risk than they are willing to take,” said Robin Rossman, managing director at the travel research firm STR.

The knock-on effect is that face-to-face meetings between clients and colleagues are waning. JPMorgan and Google are vetting visitors to their offices for anyone who has recently travelled to regions in Asia, and companies such as the $375bn asset manager Janus Henderson have encouraged employees to take laptops home on a daily basis.

Shares in videoconferencing company Zoom are up 45 per cent in the last month, while Alibaba has offered companies affected by the virus $1,000-worth of credit to buy its cloud computing software.

A rush of employees using phones has led to a deterioration in the audio quality in China and South Korea of about 10 per cent, according to Spearline, which monitors international phone lines. Its chief executive Kevin Buckley warned that Italian telecoms were also “an area of concern”.

The travel industry, meanwhile, is still holding out hope of a swift rebound.

“I think there is an element of contagion in terms of behaviour, and [people] say, ‘Should I go or should I cancel?’” said Liam Brown, group president of EMEA for the Marriott hotel chain.

“When I talk to people about why they’re not going [on trips] it’s that they aren’t so worried about the virus but that they might get stuck there on quarantine,” he said. “It’s a scary thing for many people and the media tends to have sound bites that stick in people’s heads.”

Video: Coronavirus: should we panic?