John Ruskin, one of the 19th century’s most tumultuous minds

For his 200th birthday, an exhibition at London’s Two Temple Place provides an insight into the polymathic artist

The world perceived through the eyes of John Ruskin is a wondrous, exquisite, tormenting place: beauty experienced as rapture, ugliness denounced in a moralist’s shrill tones, delight and despair equally extreme, detail evoked with an obsession for minutiae at once enchanting and suffocating. All this flows through an engrossing London exhibition, John Ruskin: The Power of Seeing, at Two Temple Place, its neo-Gothic interiors extravagantly crammed, Victorian-style, with works of art, books and other objects which Ruskin made, wrote, or collected.

Ruskin’s 200th birthday is on February 8, and a year of bicentennial shows, publications and conferences will reconsider him as social, political, economic thinker. Two Temple Place, however, kicks off by returning to the starting point for all Ruskin’s diverse endeavours: impassioned looking. Many works here come from the Guild of St George, which he set up to bring examples of art and craft to the working people of Sheffield. His writings on art and architecture are foregrounded — a highlight is The Nature of Gothic, from his 1853 three-volume treatise The Stones of Venice, in William Morris’s lovely vellum-bound Kelmscott edition. And everything is filtered through the extraordinary Victorian aesthetic of Two Temple Place.

A folly on the Thames embankment built for American businessman William Waldorf Astor in 1895, Two Temple Place is the sort of millionaire’s pastiche that Ruskin would have hated, even though it is indebted to his own hymn to Gothic. The Stones of Venice sings out from its every corner, but as if Astor’s architect has played it out of tune: here Ruskin’s Gothic ideal is Disneyfied (pre-Disney) into something approaching modern camp. Sculpted cherubs chat on the telephone, carvings of The Three Musketeers adorn the grand mahogany staircase, faux medieval stained glass windows glint on polychrome marble floors recalling Venetian palazzi.

It is glorious, comic, the perfect backcloth for a Ruskin show — connecting to his arguments about architecture, capitalism and decadence, but also a foil to his earnestness.

The exhibition begins in Venice, with Samuel Prout’s luminous 1830s watercolour “Piazzetta di San Marco”. “Sometimes I tire of Turner but never of Prout,” Ruskin wrote. You see here how Prout’s limpid precision shaped his own architectural sketches, recording his travels in France, Switzerland and Italy.

Life & Arts
Ruskin’s revival: can the great Victorian make us happier at work? 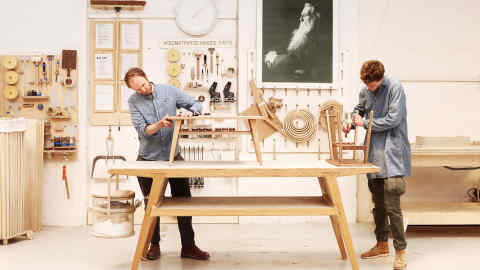 In “Kapellbrücke at Luzern” every element — rough old wooden bridge, turret depicted at an odd angle, glimmering water and mist contrasting with solid angular slats and stonework, fishing boats hinting at human presence — has its carefully chosen place in a watercolour celebrating harmony between nature and the man-made. In “The North-West Angle of the façade of St Mark’s, Venice” Ruskin fills the sheet with a monumentally looming yet delicate rendering of a section of wall — balconies, columns, arches, corbels, finials, stone tracery — in a stunning relief of light and shadow.

Prout, says curator Louise Pullen, taught Ruskin how “an emotional experience could be sought in a building’s factual history — the stories of its stones”. That architecture expresses a nation’s life and character is the central tenet of The Stones of Venice. Ruskin began it when, newly and disastrously married, he visited the city in 1849, in the aftermath of political upheaval which he perceived as threatening its very fabric.

Drawings — a glittery watercolour of the vaults of St Mark’s, acanthus decorations at Torcello, ornamental capitals from the Doge’s Palace — illustrate his assiduous stone-by-stone research; on show too are paintings he bought, such as Vincenzo Catena’s large “Portrait of the Doge, Andrea Gritti”, which Ruskin believed a Titian, demonstrating his interest in relationships between Venetian politics and patronage.

The championship of Gothic in The Stones of Venice carried many messages. Ruskin’s moral interpretation of its stylistic triumph — hand-crafted work by artisans prizing collective practice — underpinned an attack on industrialisation, mechanisation, capitalist excess, modern hideousness. In the decline of Venice, a maritime empire undone by greed, Ruskin saw lessons for Britain. Above all, his response, like that of his hero Turner, reflects Victorian nostalgia, pessimism, horror of change. His city is “a ghost upon the sands of the sea, so weak — so quiet — so bereft of all but her loveliness . . . I would endeavour to trace the lines of this image before it be forever lost, and to record . . . the warning which seems to me to be uttered by every one of the fast-gaining waves, that beat like passing bells, against the stones of Venice.”

Like many great art and architectural historians, Ruskin failed to match his sonorous flair for the past with a grasp of his own cultural times. Aged 32 when Turner died in 1851, he stubbornly refused to see, over subsequent decades, that the English master’s descendants were the geniuses of French Impressionism, not Pre-Raphaelite dead ends such as, here, Burne-Jones’ sentimental angel “Love Reigning over the Elements” or Holman Hunt’s “Grapes and Pineapple”.

More tragic, for a mineralogist who adored his rocks, was Ruskin’s conflicted relationship with science. He saw a kinship between observed truths in science and art, but “if only the Geologists would let me alone!” he cried, “those dreadful Hammers! I hear the clink of them at the end of every cadence of the Bible verses”. In Ruskin and his Contemporaries, an excellent companion to this exhibition, Ruskin scholar Robert Hewison argues that the shock of Darwin — the idea that natural beauty was created not for divine or aesthetic glory but for sexual reproduction — tipped the troubled, chaste Ruskin into mental instability.

At Two Temple Place a heart-rending depiction of a high-browed Ruskin — with penetrating blue eyes, face half shadowed, riven with inner pressure — though credited to Fairfax Murray is probably a self-portrait. In his diary, Ruskin describes a nightmare where a surgeon takes a scalpel to his skull. This unique show allows us too to walk into one of the most original, tumultuous minds of the 19th century.

To April 22, twotempleplace.org. A version of the exhibition then tours to Millennium Gallery, Museums Sheffield, May 29-September 15, museums-sheffield.org.uk

When Ruskin was derided as an ‘unthinkable alien’ / From Joel E Turner, Havertown, PA, US