George Parker in London, Sam Fleming in Brussels and Arthur Beesley in Dublin

Boris Johnson on Tuesday urged Leo Varadkar to keep faith with talks on a possible Brexit deal, despite Downing Street fears that the prospects for an agreement before October 31 are all but dead.

Mr Johnson’s allies said the British prime minister would meet the taoiseach later in the week to try to resuscitate the talks, after a day of acrimony in which Number 10 aides accused Mr Varadkar and Angela Merkel of blocking a deal.

Donald Tusk, European Council president, retaliated by accusing Mr Johnson of engaging in a “stupid blame game”, but both sides seemed determined on Tuesday night to cool tempers and avoid a complete breakdown.

Mr Johnson’s team described a 40-minute telephone call with Mr Varadkar as “constructive” and said they expected the prime minister to meet his Irish counterpart on Thursday or Friday for more talks.

“Both sides strongly reiterated their desire to reach a Brexit deal,” a Downing Street spokesman said. But the Irish leader later on TV pointed to the difficulty of securing an agreement by next week’s EU summit. 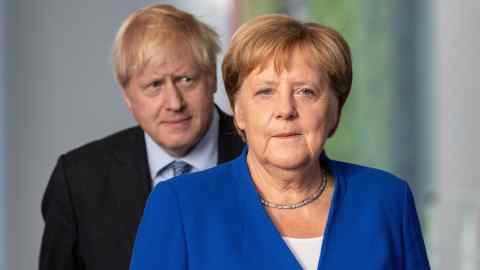 Each camp remains far apart on the key issue of how to handle the Irish border, with tensions fuelled by what Downing Street called a “frank” 30-minute phone call between Mr Johnson and Ms Merkel.

Mr Johnson’s aides claimed Ms Merkel argued that Northern Ireland would have to remain in the EU customs union under any Brexit deal in order to avoid a hard border. Mr Johnson has insisted that the region must stay in the UK customs territory.

“Merkel said that if Germany wanted to leave the EU, they could do it no problem, but the UK cannot leave without leaving Northern Ireland behind in a customs union and in full alignment forever,” said a Downing Street insider.

“The call with Merkel showed the EU has adopted a new position. She made clear a deal is overwhelmingly unlikely and she thinks the EU has a veto on us leaving the customs union.”

Sterling slipped to its lowest level against the euro for a month.

There is pessimism in Brussels and London about the prospects of a deal by October 31, let alone by the time of the EU summit. Talk in Brussels is turning to an extension of the Brexit process — something Mr Johnson has vowed cannot happen.

Mr Johnson’s allies have not confirmed that the prime minister will definitely attend the October 17-18 summit, especially if it turns into a discussion about the terms and length of any extension to the Article 50 exit process.

Mr Varadkar told Irish broadcaster RTE on Wednesday night that there were still “big gaps” over customs and the question of Northern Irish consent for the all-Ireland regulatory zone. “It’s going to be very difficult to secure an agreement by next week, quite frankly,” Ireland’s premier said.

“Essentially what the UK have done is repudiate the deal that we negotiated in good faith with prime minister May’s government over two years and have sort of put half of that now back on the table and are saying that’s a concession — and of course it isn’t really.”

The Irish leader said there were “quite wide differences” over customs, adding that the question was “extremely difficult” to settle.

Dublin very much wanted a deal “but not at any cost,” he added. Ireland respected the UK referendum result but the British government had made commitments in relation to the border and the all-island economy “and it’s my job to hold them to those commitments.”

With talks on the verge of collapse, an unnamed Number 10 source wrote a remarkable note in which they claimed Britain would punish EU member states if they agreed to extend the Article 50 exit process.

Mr Johnson’s aides fear that the EU will decide to push the prime minister into seeking a delay to Brexit, precipitating a general election and possibly a second referendum, with the possible result that Brexit is reversed.

A note published by The Spectator — attributed to a “contact in Number 10” and not disowned by Downing Street — said there was a threat that any EU member state that agreed to delay Brexit would be guilty of “hostile” interference in British politics.

The note suggested that Britain might withhold co-operation with countries that pushed the UK into a Brexit extension, with security and defence cited as possible examples. “Those who support delay will go to the bottom of the queue,” the note said.

Brexit
Brussels plays for time as UK goes on the attack 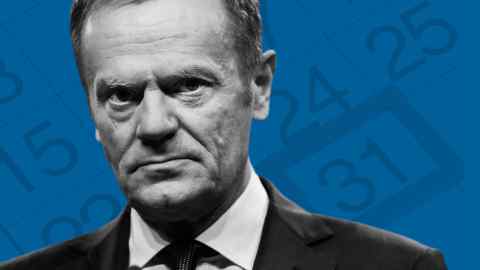 The combative language led many Tory MPs to conclude the note came from Mr Johnson’s senior adviser Dominic Cummings and it led to cabinet ministers urging the prime minister to rein in his consigliere.

“I am clear that any threat on withdrawing security co-operation with Ireland is unacceptable,” tweeted Julian Smith, Northern Ireland secretary. “This is not in the interest of NI or the Union.”

Nicky Morgan, culture secretary, complained to Mr Johnson that it was wrong that the government’s position was relayed to a weekly magazine before cabinet. The prime minister replied that he spoke for the government, not anonymous advisers.

The note published by the Spectator also accused Mr Varadkar of “going back on his commitments” to negotiate seriously if Mr Johnson agreed to keep Northern Ireland in the EU regulatory zone.

“Varadkar thinks that either there will be a referendum or we win a majority but we will just put this offer back on the table so he thinks he can’t lose by refusing to compromise now,” the note said.

Video: Brexit: how to become a British citizen