Is the spark about to die for the internal combustion engine?

After a century’s dominance beneath the bonnets of the world’s cars, the piston-driven petrol engine faces a gradual replacement by batteries or fuel cells.

This shift, driven largely by regulation as countries seek to decarbonise, leaves carmakers facing a dilemma: Can they afford to invest in both batteries and combustion technology?

Despite improvements in past decades, the internal combustion system is still far from perfect. “Compared to state-of-the-art engines today, we can certainly see routes to improve peak efficiency by up to around 30 per cent,” says Adrian Greaney, director of engines at Ricardo, a UK company that provides engines for McLaren supercars.

The history of engine refinement is largely the story of progress gained by several small breakthroughs rather than any major change.

Each tweak may gain one or two percentage points in efficiency which, taken together, make a huge difference. The fundamentals of combustion remain unchanged but the engine of today is almost unrecognisable in output and performance to those of decades gone by. 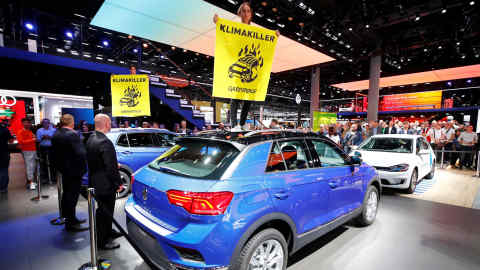 “The petrol engine has undergone remarkable developments in the past ten years, internal friction, variable valve timing, direct injection and turbocharging, just to name a few,” says Thomas Weber, head of development at Mercedes-Benz. “And it will make further progress.”

One such change is direct fuel injection: spraying a mist of gasoline into the cylinder wastes less fuel. Take-up has risen from 3 per cent of cars a decade ago to being fitted on half the cars sold in the US.

Another is turbocharging. Once the favoured technology of street racers with modified cars, the technology — where the exhaust drives a turbine that sucks more air into the engine — is now widespread.

Historically, many of the times of steepest change have coincided with regulation, particularly around CO2 emissions in Europe or fuel economy in the US.

In 1975, the US introduced the Corporate Average Fuel Economy standards — known as Cafe — forcing carmakers to register the efficiency of their vehicles. Within a decade, fuel economy in US vehicles doubled.

Today, carmakers in Europe face punishing fines if they do not meet new CO2 limits that come into force on January 1. Manufacturers must lower their emissions to an average of 95g of CO2 per km or face penalties that could run into billions of euros.

However, Elisabeth Koestinger, Austria’s sustainability minister, says the targets are an “important signal in our fight against climate change”.

Such is the pace of efficiency gains being demanded that carmakers are turning to electrification and cramming their vehicles with batteries or hybrid systems.

Volkswagen has promised that a quarter of its cars will be fully electric by 2025 while Volvo has said half its vehicles will be battery-only by that date.

This raises the question of whether they will ignore any advances in old-school combustion technology. Daimler has indicated it will not invest in such development beyond 2025.

Because of engine life cycles — which can run for as much as 15 years — carmakers that develop new engines in the second half of the 2020s will see them still on sale in the 2040s, by which time several governments, including the UK and France, plan to have banned some traditionally powered vehicles.

For engineers, batteries open new possibilities, especially with hybrid cars. Adding a battery to the mix eases pressure on the engine, allowing it to run only at times it can operate at or close to maximum efficiency.

“Basically you use electric to ensure that the engine is operating near its maximum efficiency,” says Mr Greaney. Batteries can also be used to keep an engine at its optimum temperature of about 90C.

The cost of making traditional engines compliant with stronger emissions rules may finally kill the technology. Herbert Diess, Volkswagen chief executive, previously predicted that the cost of a diesel engine would rise by €2,000 between 2016 and 2020 as a result of the changes.

Additionally, because investment costs are recouped by volume sales, developments that only feed into a declining number of traditional engines will end up costing customers more.

Mr Greaney at Ricardo adds: “It’s no good developing the world’s best engine technology if no one can afford to deploy it and realise the benefit.”