When the pandemic disrupted Switzerland’s annual spring watch trade shows last year, exhibitors were forced move the party online. So, this week, 38 brands are introducing new collections via presentations and webinars hosted online at the Watches and Wonders Geneva fair — with Rolex, Patek Philippe and Cartier among the virtual exhibitors. In addition to this, a physical five-day W&W watch show is being held in Shanghai next week, where visitors and 19 exhibitors hope to replicate as much of the pre-pandemic experience as possible.

Organisers say, in the circumstances, this was the best anyone could hope for.

But not everyone thinks so. Several high-profile brands have absented themselves from the events. Audemars Piguet, Richard Mille, Breitling and the Swatch Group — which includes Omega and Longines — are not at Geneva. A Morgan Stanley watch industry report last month helped identify that almost half of Switzerland’s top 20 watch brands had decided to go it alone this year instead.

Some have questioned the event’s cost and format. Others have considered whether there is still any point in a watch fair in a highly connected, globally minded world.

“In a digital world, you don’t need a fair,” argues Georges Kern, Breitling chief executive, who presented the watchmaker’s latest offerings online the day before W&W began. “You cannot see all the journalists, retailers or customers at a fair. And, anyway, the customer doesn’t care. The world changed.” Kern says Breitling’s previous digital presentation was watched by 4m people in October.

For others, the issue is control. “Today, 100 per cent of what we do should be Omega and not anything else,” says Raynald Aeschlimann, Omega chief executive. Parent group Swatch left Baselworld, Switzerland’s other major watch fair, after the 2018 event, taking its Harry Winston and Breguet brands with it, and saying it would save $50m in the process.

“One thing we forget is the consumer,” explains Aeschlimann. “It’s important we do it our own way, because that’s how the consumer feels it.” Omega announced its new watches late last month via its own online presentation.

The effectiveness of watch fairs has been cast into even greater doubt by Morgan Stanley’s report. It suggests many of the brands not taking part in a fair gained market share last year, including Breitling (up from 1.8 per cent to an estimated 2.4 per cent) and Audemars Piguet (up from 3.4 to 4.3 per cent).

Breitling left Baselworld in 2019. Kern argues he can spend his money better. “A fair for a big watch brand is SFr4m-SFr5m [$4.2m-$5.3m],” he says. “If you do a digital summit extremely well, it’s a couple of hundred thousand Swiss francs and you reach out to millions of people in a way you cannot during a fair.”

One of the threats to watch fairs is brands becoming retailers. Trade shows that connect watch brands with both international and local distributors are no longer critical for the watchmakers that operate their own retail networks.

“It got to a point where we didn’t have any more retailers to do meetings with,” says Tim Malachard, global marketing director at Richard Mille, which sells all its watches through a global network of 42 boutiques. “Being at a fair doesn’t make sense for us. It becomes very ex­pen­sive when it doesn’t add to our sales.”

But some of those brands not at the fairs appear to wish they were.

“I went a lot of times . . . to say what we should do differently,” says Audemars Piguet chief executive François-Henri Bennahmias of conversations he had with the Fondation de la Haute Horlogerie, which organises W&W. “I was pretty angry at the time but decided we had to do what was right, which was to fly on our own. I’m sad we couldn’t find a way for the whole watch industry, which is still a tiny business, to meet together.”

Audemars Piguet exhibited at the precursor to W&W, the Salon International de la Haute Horlogerie, until 2019. Bennahmias says he would return if a series of smaller events were held around the world over a year. “Swiss watchmaking is still very much unknown to the world,” he says. “So we have to reinvent the watch fair. A watch fair could be Art Basel meets fashion week meets an Apple launch meets the Academy Awards. There are so many things we could do to increase the awareness of the watch industry. I still have hope.”

Matthieu Humair, FHH chief executive, says this could still happen in the future. The FHH has already taken the W&W brand to cities such as Miami and Hong Kong, and is hosting the physical event in Shanghai next week. “What’s important for the industry is to have a joint voice, to talk together,” he says.

Watches & Jewellery
Watches and Wonders 2021: Conversation pieces from the shows in Geneva and Shanghai 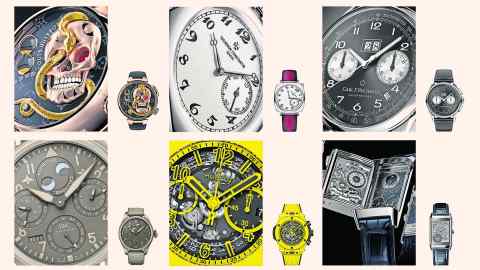 Privately some brands exhibiting at W&W have voiced concern at the cost (some report fees of about SFr100,000), others say being at the fair is vital to their business. “It’s a huge moment for the industry to come together and feel the mood and to get the interaction between brands, journalists and clients,” says Christoph Grainger-Herr, chief executive of IWC, which is participating in both the online and physical events in Shanghai. “The digital format is not very efficient because there’s no face-to-face,” he says. “This is why we should have a physical fair.”

At luxury group Kering, the position is more ambiguous. One of its fine watch making brands, Ulysse Nardin, is taking part in W&W, the other, Girard-Perregaux, is not. “The two brands have different needs,” says Patrick Pruniaux, who is chief executive of both companies and on the FHH governing body. He says he prioritised Girard-Perregaux’s partnership with Aston Martin, which was announced to coincide with the unveiling of the carmaker’s new Formula One model in March.

Watches & Jewellery
Watches and Wonders’ Emmanuel Perrin: ‘Vital for watchmaking to keep our own fashion week’ He is not ruling out a return for Girard-Perregaux. “We have to regroup as an industry at some point and go and meet our end-consumers and excite them,” he says. “We need to find a balance between a mother-ship event and events in other key locations.”

But for others, watch fairs are simply the wrong format. “We used to have more than 1,000 appointments in Basel and someone was always late and someone else was always early,” says Matthias Breschan, chief executive of Longines, which is part of the Swatch Group. “Doing events in-country or inviting people to [our headquarters in] Saint-Imier gives us a different quality of meeting. We have time. We can do it in a more qualitative way than at a fair.”

For many outliers, this year is an an­omaly. “The industry needs a moment of attention where the world synchronises itself to the frequency of watchmaking,” says Guido Terreni, chief executive of Parmigiani, which is not at this year’s event. “But to do it in a digital and distant way is not the best way.”

Carlos Rosillo, Bell & Ross chief executive, says digital fairs offer no advantage “compared to what we could do ourselves”.

W&W’s organisers say they are optimistic about the future of their event. “There was a strong request from the brands to be together and stick together,” says Humair of this year’s fair. While decisions on next year’s event have yet to be made, he says brands, including Rolex and Patek Philippe, are “committed more than ever” to the concept. “We’re stronger together,” he says.