US regulators have approved the first drug to treat depression in decades, paving the way for Johnson & Johnson to sell a nasal spray based on ketamine, a drug often abused for recreational purposes.

The Food and Drug Administration approved esketamine, which will be sold under the brand name Spravato, for adults who have already tried at least two other antidepressant treatments.

As the first new type of antidepressant since Prozac was released more than 30 years ago, the drug was given a “breakthrough therapy” designation and fast-tracked through the approval process.

The drug is the first to use esketamine, one of the mirror molecules that make up ketamine, which is a schedule III-controlled substance in the US and a class B drug in the UK. Ketamine is used medically as a general anaesthetic.

Clinical trials showed the spray could have an effect in as little as two days. In longer-term trials, patients taking the spray on top of their existing antidepressant showed statistically significant delays in relapsing into depression.

But the risk of serious side effects — most notably sedation and dissociation — means the drug will have to be administered in a doctor’s office or clinic, and patients will have to be monitored for two hours after receiving the dose.

Tiffany Farchione, acting director of the division of psychiatry products in the FDA’s Center for Drug Evaluation and Research, said there had been a “longstanding need for additional effective treatments for treatment-resistant depression, a serious and life-threatening condition”.

Shares in Johnson & Johnson were flat in after-hours trading when the approval was announced. 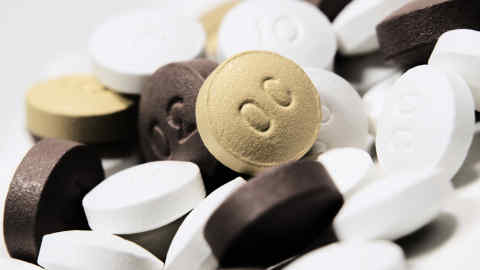 Mathai Mammen, global head of Janssen Research and Development, a subsidiary of Johnson & Johnson, said Spravato was a “unique and innovative medicine” that had the potential to offer “new hope” to the third of people with major depressive disorder who have not responded to existing therapies.

Some sufferers of depression have been turning to ketamine infusions at so-called wellness centres but doctors have not been able to prescribe the treatment and health insurers will not pay for it.

Esketamine acts on a completely different system than previous antidepressants. While traditional drugs work on the brain chemicals serotonin, dopamine and norepinephrine, esketamine acts on the glutamate system, which processes information and memory. It is thought to help restore connections between brain cells for a rapid and sustained improvement.

Allergan, a Dublin-based pharmaceuticals company, is developing another antidepressant based on the glutamate system. It hopes to announce the results of its phase-3 clinical study on Rapastinel soon.