Portraits of monarchs and scientists from centuries past grace the wood-panelled walls of Cambridge college halls, gazing down at today’s fellows and their guests dining by candlelight while butlers serve wine in silver goblets. Cambridge is not a university that stints on the history — which is little wonder, given that it predates Gutenberg’s printing press.

Yet it is far from fusty. The sleek and contemporary lines of sophisticated laboratories and offices springing up within and beyond the city’s limits contrast with the ornate stonework which tourists come to admire and undergraduates take for granted.

Billion-dollar multinationals, such as Microsoft, Apple, Amazon and AstraZeneca, have piled in to make their home in “Silicon Fen”, while fledgling ventures are welcomed and encouraged. The new and speculative rubs shoulders with the established and thriving.

“The Cambridge cluster is the most successful innovation engine in Europe,” says Andy Neely, pro-vice-chancellor for enterprise and business relations at the University of Cambridge. “The Cambridge brand is about insatiable curiosity coupled with a desire to create world-changing impact.”

Europe’s largest technology cluster employs more than 61,000 people in more than 5,000 so-called “knowledge-intensive” companies that last year generated £15.5bn in turnover, according to data collated by the university and published in October.

“Cambridge has been changing the world for over 800 years and it is only just getting started,” says Billy Boyle, chief executive of Owlstone Medical, an award-winning spinout that has attracted more than $90m in funding for its breath-based biopsy technology.

The first UK science parks appeared in Cambridge in the early 1970s, when Trinity College, one of the UK’s wealthiest educational institutions, set up Cambridge Science Park on land that it owned to the north-west of the city. Aping the US model pioneered by Stanford in the 1950s, the initiative was prompted by government pressure to boost links between higher education and industry. Other colleges, including St John’s and Peterhouse, followed Trinity’s lead.

Owlstone, which is based at that first science park, “has benefited tremendously from being located in the heart of this incredibly dynamic environment”, says Mr Boyle, who co-founded the company three years ago. “This has helped us to recruit top clinical scientists, engineers, chemists and other key personnel from the UK and around the world.”

We are brilliant but everybody else wants to be brilliant. This is a race not against Oxford but Shanghai, Singapore and Boston

The past decade or so has seen a burst of construction around Cambridge as new towns, research facilities and science parks have appeared and been extended. The amenities at Cambridge Science Park, which has grown from 25 companies at the end of the 1970s to 105 today, include a nursery, a restaurant and bar, and a fitness centre.

Cambridge spinouts, companies that are based on university research, raised $2.2bn in 2013-17, the largest amount of any university globally, according to the latest figures published by Global University Venturing, a specialist magazine and website. It was second only to Stanford for the number of deals, with 96 in the four-year period.

Cambridge also had a record number of 33 backers — a varied group ranging from the university itself to Amadeus Capital Partners, KKR, Johnson & Johnson, Pfizer and Alphabet — willing to support its spinouts.

To the south of the city, where the life-sciences industry is concentrated, Babraham Research Campus and Granta Park together accommodate about 80 start-ups, spinouts and established companies.

Babraham Bioscience Technologies, which styles itself as “more than a landlord” for the companies based at the site, develops and manages the research campus on behalf of its shareholders the Biotechnology and Biological Sciences Research Council and the Babraham Institute.

It also runs conferences and, through a programme called Accelerate, offers access to communal labs and mentoring. Derek Jones, BBT’s chief executive, says the site offers those starting out “a journey from a bench to a building”.

“Cambridge from the outside world looks insular and quite a hard nut to crack but it really isn’t,” he adds. “It’s a very supportive community. People who are really successful still give their time up to aspiring entrepreneurs. But it is a village: you come across the same people.”

“We can support a new life-sciences company all the way to a major player like [California-based diagnostics group] Illumina,” says Colleen O’Connor, senior director for the UK of BioMed Realty, a property company that owns several buildings in Granta Park and in Babraham. “Companies leasing our facilities have an opportunity to become part of a vibrant life-science community with access to academic partners, research institutions and other life science peers.”

Tom Weaver, an American who is currently chief executive of PetMedix, a company developing medical treatments for dogs and cats, concurs.

How will Brexit hit British research?
The outlook is worrying — but Boris Johnson’s government has been strongly pro-science

“It is still exciting, just as challenging and rewarding, to do science in industry, particularly in biotech start-ups, as it is in a traditional academic path,” says the molecular biologist, whose venture raised £8m Series A funding this year from co-investors Parkwalk Advisors and US-based Digitalis Ventures.

But Cambridge cannot rely solely on its past successes — especially given that there are an estimated 900 science parks worldwide, according to industry body IASP. “We are brilliant but everybody else wants to be brilliant,” says BBT’s Mr Jones. “This is a race against not Oxford but Shanghai, Singapore and Boston.” 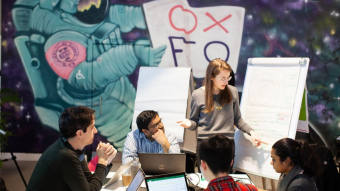