Lending Club, the first company Renaud Laplanche founded, way back in 2006, has recently undergone a transformation. Laplanche set it up as a “marketplace” lender — meaning all the loans it originated were sold off to third-party investors, rather than held on its own balance sheet.

This year, however, Lending Club secured a banking charter, aiming to bring in low-cost deposit funding and hold some of the loans it makes, to earn interest revenue. Lending Club’s beat-up shares have rallied nicely on the news.

But Laplanche, who resigned from Lending Club in 2016, is still a committed fan of the marketplace model. And he has good reason to be: Upgrade, a lending platform he co-founded that same year, has used this model, and innovative ideas about retail lending, to grow by leaps and bounds.

“We have no intention of seeking a [banking] charter — we’re happy with a pure marketplace model,” he says.

“A lot of our funding comes from small banks and credit unions [that buy Upgrade’s loans], and credit unions have the lowest-cost of funding of all, as [they are] tax-exempt non-profits — even lower cost than if we were taking deposits.” This approach has helped elevate the company to the top of the latest FT-Statista annual list of the Americas’ fastest-growing companies, which ranks businesses by their 2016-19 compound annual growth rate. Upgrade delivered a CAGR of 682 per cent over this period.

Just three years after starting out, Upgrade’s revenue from fees paid by borrowers and investors hit $59m in 2019 (the GAAP figure was $45bn, due in part to accounting adjustments to the value of loans).

This rapid growth continued into 2020: Laplanche says revenues rose to $100m, despite the global pandemic, which led consumers in the US to pay down credit card and other forms of debt.

He argues that the pandemic served as an affirmation of Upgrade’s business model.

In March 2020, mainstream consumer lenders took their loan origination volumes down 50 by per cent, “thinking the world was going to end” and that mass unemployment would lead many borrowers to default, Laplanche notes.

“What we found was that our [typical] customer was likely to stay employed — and those that did lose their employment were still able to make payments on their loans.”

Part of this is down to the profile of the average Upgrade customer: in their 40s and earning about $100,000 a year. But the design of the products, which encourages borrowers to pay down rather than maintain their debt, has helped, too.

The company offers personal loans and a credit card, but both products operate an instalment structure with a fixed rate and a set number of equal payments, to ensure the balance declines every month. A customer with good credit will generally qualify for a rate of 9-12 per cent, Laplanche says, compared with an average 17.9 per cent for traditional credit cards.

He thinks that, because customers are forced to pay balances down, there is a positive selection effect: borrowers tend to be committed to repaying debt. Upgrade’s loan default rate is similar to that of other credit cards, in the 3-5 per cent range. In the past four years, 12m people have applied for loans from the platform.

The company has also recently launched a full digital banking product, taking deposits and offering debit cards. The card offers 2 per cent cashback on transactions. This is made possible because deposits are passed on to partner banks and credit unions, which in return pledge to invest in Upgrade loans.

The chief executive describes this as a “distributed banking model” that protects Upgrade from overexposure to volatile capital markets, where many other marketplace lenders sell their loans. 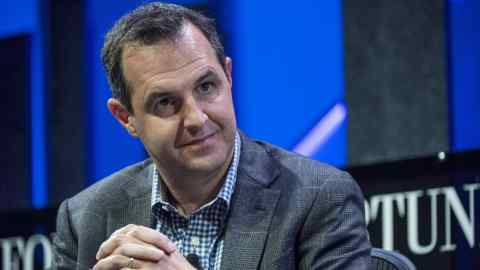 Laplanche left Lending Club in 2016 under a regulatory cloud, after the Securities and Exchange Commission alleged that an asset management company he ran was buying up Lending Club loans to provide additional demand.

In 2018, he paid a fine of $200,000 and accepted a three-year ban from certain securities intermediation roles, with no admission of liability.

He is quite relaxed about that difficult period. “We had a series of compliance issues and disagreements about how to resolve them, and so I left,” he says. He is focusing instead on keeping the growth going at Upgrade by expanding its product line and, in time, its geographic reach.

“There will be a time we want to expand beyond the US, but not for a couple of years.”