Francesca Federico turned her teenage interest into a thriving business

While her siblings played video games, Francesca Federico was kept busy helping workers at her father’s US car company with their retirement plans.

Growing up in the greater Boston area, she was just 14 when her dad asked her to take a look at the paperwork.

Instead of playing Super Mario Sunshine and the Sims, she researched the pensions business and found out that workers at the family garage were paying more than they should for what they received.

Seventeen years on and Ms Federico’s mission as a co-founder and principal at Twelve Points Retirement Advisors is not all that different: she is one of the youngest of the 18 staffers in the office and still enjoys helping people understand how to best save for retirement.

Ms Federico is proud that she grew up with “blue collar people” who fix cars and roads for a living. Her clients now include IT specialists and lawyers but she still works with blue-collar tradespeople, such as construction workers.

They are eager to understand what a 401(k) plan can offer, so she often goes directly to building sites to speak to them. “I care about the participants and the employees,” Ms Federico says. “Every dollar you can save them is going to their retirement.”

Now 31, Ms Federico is among the youngest people to appear on the FT 401(k) list this year.

In the past five years, Ms Federico has helped drive much of Twelve Points’ growth, which has seen the number of retirement plans it handles grow from five to 75.

The company’s assets under advice total $500m, nearly half of which is handled by Ms Federico. About 80 per cent of that amount is in retirement assets.

To win more business, Ms Federico goes to the US Department of Labor website to see audit information with publicly posted 401(k) and 403(b) plans.

She notes which funds companies use and then cold-calls sponsors or employers to try to win the business of offering retirement benefits to workers.

When she talks to human resources staff about fee schedules and fiduciary responsibilities, she likes “breaking it down for them”, since retirement planning is not typically their expertise but “a fraction of what they do”.

Ms Federico and Twelve Points are able to capitalise on plans that have been in place for several years. For instance, many law firms in the Boston area “put these plans into place 10 or 15 years ago and never looked at them again”.

Because the plans have grown in value over the years — without fee charges being reviewed — the attorneys at those groups are happy to switch to Twelve Points, which aims to offer them a lower rate than previous advisers.

Tech companies are also high on the list of would-be clients targeted by Ms Federico since Twelve Points began five years ago.

She says she thrives in one-to-one meetings. On one Tuesday in September, she and three colleagues planned to see 65 employees in back-to-back meetings to advise on retirement planning.

One gripe that Ms Federico hears from employees in their 20s or 30s is that “they are saddled with debt”. Between student loans and credit card debt, they tell her, “I’m not going to worry about my 401(k) because that’s 40 years from now.” 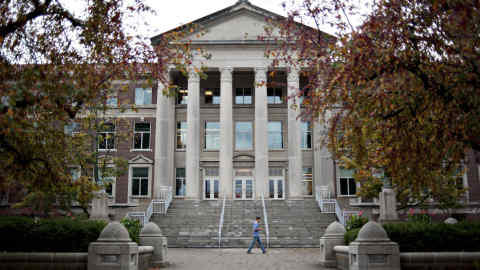 She tells them that this is the wrong attitude — and “you can’t make up for missed time”.

Once clients invest in a defined contribution plan, many then ask about health savings or whether they should buy into an employee stock option plan.

As they grow older and their circumstances change, they go on to seek advice about buying a home or running a joint bank account with a partner.

Because of the “face time” that Twelve Points promises clients, the company is “most effective” with plans that include between 50 and 300 employees, says Ms Federico, who is keen to maximise the amount of time that she and colleagues can spend on giving advice.

This approach has helped the retirement adviser grow rapidly. Twelve Points now aims to double its assets under advice and it hopes to reach the $1bn mark by the end of next year.