When we asked you to submit pictures of the four-legged or feathered animals saving your sanity, hundreds of you responded. Here are some of our favourites

Last December, Kate Finnigan’s ode to the unsung heroes of 2020 – our pets – inspired an overwhelming response from readers, who sent us dozens of pictures of the furry and feathered creatures who are helping them stay sane.

How To Spend It picture editor Katie Webb had the joyful and difficult task of selecting some of the best images to share. “We had a huge response to our pet gallery shout-out – which is testament to the love we have all felt for our pets during lockdown,” she says. “All the pictures were adorable, but here are some of our favourites.”

Schnitzel’s owner Patrick McMeekin could not have survived working from home without having the laziest, greediest and most perfect sausage dog by his side. The six-year-old is a sun seeker and rides pillion on Patrick’s motorcycle.

This is William, sitting next to his portrait by Gucci illustrator Alex Merry. Merry painted the five-year-old cockapoo wearing an antique kimono as a birthday present for owner Amy Long’s husband.

Ganymed dei Lupercali, otherwise known as “Med”, is a seven-year-old Bergamasco shepherd whose favourite dish is buttery roast polenta with mackerel in olive oil straight from the tin. He loves living in Switzerland with Andrea Moreggio and pulling a wooden sledge miles up the mountain before racing it back down at full speed.

British shorthair Tutti Biscotti came from a shelter almost four years ago, and is “a bit of a weirdo”, says owner Karen Harvey. Although she’s nearly 14, she’s young at heart and is obsessed with chairs – if you put one in the middle of a room, she will jump on it, sit up straight, roll around and smile.

Meet Marni Bear the two-year-old cocker spaniel, who lives in Richmond upon Thames with Anna Berkeley. Marni Bear is very talented at dribbling a rugby ball, hates the rain, detests the bath and is terrified of the hoover. Coincidentally, her brother lives in the next street and they are always beside themselves when they see one another.

From Toronto, Dallas the seven-month-old Maltipoo will be crossing the Pond to London as soon as it’s safe. The social butterfly will make a beeline for the local pub in owner Barbara Timmins’ old neighbourhood of Soho, where he plans to hold court.

One-year-old Willow joined Charles King and family in Buckinghamshire the night before the first lockdown. Her favourite activity is probably sleeping, like most cats, but this is interspersed with bouts of rushing around after the squirrels in the garden – her tail is as fluffy as theirs, so she seems to think they’re friends.

Seven and Tooki are eight-year-old rescue cats in Charlotte, North Carolina. Tooki loves to be brushed and Seven is a climber and always bats the ball back to owner Denise Valentine.

Eight-year-old Albert is a cross between a Dalmatian and a springer spaniel – or a dinger – and lives in London with the actress Eileen Walsh and her family. He loves a tug of war and can identify a carrot being peeled from 20 yards away.

Last spring, Esperanza Martinez’s cat brought Birdie into the house – his parents were nowhere to be found and he needed constant feeding. He soon started hopping around and decided that the best spot to perch was on her shoulder and the perfect time to practice singing was during video calls. As he got bigger, he was gradually reintroduced to the outside world and to other birds, and finally flew away.

Although Kimchi is only small, the three-year-old mini poodle can run as fast as the greyhound in her dog-walking crew, much to the pride of Farris Green. She modelled for the dog and cat outfitters Mungo & Maud, and knows all her toys by name – Pizza is her favourite.

Now 11 years old, calico-coloured Alia was a street cat in Abu Dhabi until her owner Jane Strachan adopted her and moved to Nice, France. Alia epitomises how we have all been feeling much of the time: howling in horror as events unfold, and screaming with joy in the moments of relief. She also likes to curl up in a box and ignore the world.

This is Colin, a seven-month-old Persian cat. He is always stuck to his owners’ ankles and has been the light of their lives during this horrid pandemic. He’s very sociable, pokes his chunky little paws in everything and likes playing peekaboo – it’s a wonder how owner Jennifer Barba can ever get work done when this mischievous ball of fluff is never more than a few inches away.

Justine Cook’s rescue cat has brightened her world since becoming a member of the family in 2019. Aptly called Hope, the four-year-old lives in Wales.

This is Beau the French bulldog, who recently chewed all the furniture in the hotel room where he was staying with his owner Shreyash Jhawar. The seven-month-old lives in New Jersey and thinks snow is something to be eaten.

Archibold lives on the Isle of Dogs in London with Emma Bohman-Bryant. He likes to open the sliding doors of Emma’s closet to sleep next to her shoes, joins all of her work calls and watches the seagulls by the Thames.

At just five months, cavapoochon Maisie thinks she’s bigger than she really is, happily playing with dogs four times her size. She likes to say hi to everyone and greets people by rolling over for belly rubs – she definitely doesn’t understand social distancing, says owner Hannah Walker.

Susan, also known as Susan Sweetheart for the heart shapes in her fur, is an eight-month-old moggy living in the Cotswolds. She was adopted during lockdown, along with her brother Hector, as they couldn’t bear to be apart. Her favourite hobby is to attend conference calls by snuggling into owner Katie Muldoon’s elbow and purring just enough for alert people to inquire about her health.

Eight-year-old Neo is a New York City “boroughbred”, scooped up off the streets of Queens six years ago as a stray. He now resides in Manhattan and is a saviour to his owner Allison Sole. Central Park is his favourite playground.

This is Beaumarchais. He’s four months old and lives in London. Although he’s Siberian, he doesn’t like the snow. He prefers owner Marilyn Hoyle’s pillow, Post-It notes and the smell of cheese.

Lockdown Lab Bellini was born in March 2020 in Portugal. She loves eating plants in the garden – including the chilli plant – and jumping on the bed for morning cuddles with owner and HTSI contributor Mary Lussiana.

Labradoodle Skrållan likes to hang out while her owner Paola Solares-Urnes chops wood in the barn in Hampshire. At three months old, she is naughty, very chatty and loves dirty socks. She will also do anything for food and will happily accept raw carrots, sweet potato and broccoli as training treats.

Food is Lola’s passion and she considers dog toys a waste of nap time, says owner Pedro Saffi. The five-year-old French bulldog has a strong preference for sitting on velvety surfaces and isn’t too keen on public transport.

This grumpy rescue tabby, Margot, is four years old. She napped most of the way through 2020, which her owner Rebekah Crichlow honestly thinks was probably the best approach.

Meet Maggie, a crazy saluki crossed with a lurcher, who was brought to Battersea Dogs Home after being found tied to a lamppost. Luckily her owner Thea Courtney gave the two-year-old a loving home and she now spends her time leaping around in the woods and visiting the seaside.

A rescue kitten from the streets of Athens and now a full-time resident in London with Ariana Mouha, six-year-old Charlie is full of character, constantly making his owners laugh with his various antics.

French bulldogs Chas, five months old, and Dave, almost seven, are great friends. Owner Susannah Hardy says they love to chase footballs in the park and wrestle with each other for hours on end.

This is Niko, the best therapist and biggest joy to owner Natasa Ornella, who lives in China. It was a long, lonely year, but Niko provided a lot of fun and laughs.

This is Moose, an orange tabby whose morning exercise is a belly-rub play fight. In the evening, the 14-year-old runs around his Manhattan home at top speed for no apparent reason, in front of his owner Michael Carl.

Explore the series
READ MORE
I didn’t like cats... until the pandemic 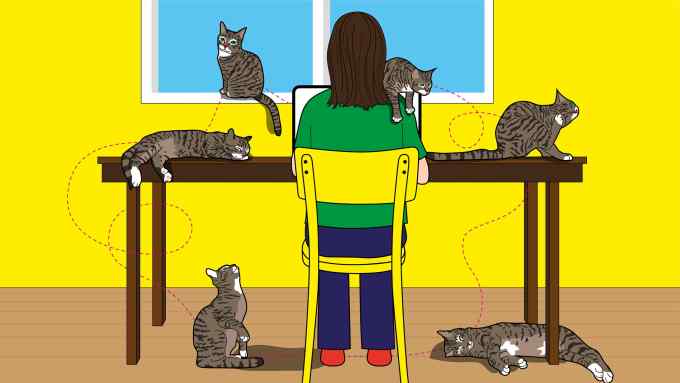