Boris Johnson will set out details on Wednesday of a £12bn “green industrial revolution”, insisting to Conservative critics that a new environmental focus will not cost the party votes in former Labour heartlands.

Mr Johnson, writing in the Financial Times, said the push for nuclear, hydrogen, electric cars and offshore wind power amounted to “one of the most innovative and ambitious programmes of job creation we have known”.

The prime minister’s 10-point green plan is central to his government “reset”, as he tries to map a future beyond the Covid-19 crisis — and to move on after the chaotic infighting in Downing Street in recent days.

Allies of Dominic Cummings, Mr Johnson’s former chief adviser, who quit last week, have argued in public and private that a shift towards a green agenda would lose the party votes in former industrial areas.

James Frayne, a public affairs consultant and former colleague of Mr Cummings, warned that “a shift in strategy to prioritise so-called ‘softer issues’ — like environmental causes . . . means working-class voters will slowly but surely peel off to Labour”. But Mr Johnson’s FT article attempts to counter that argument. “British towns and regions — Teesside, Port Talbot, Merseyside and Mansfield — are now synonymous with green technology and growth,” he wrote. He said it had been proved that “green and growth can go hand-in-hand”.

“Imagine Britain when a Green Industrial Revolution has helped to level up the country,” he said. The recovery would be accompanied by high-skilled jobs and cutting-edge technology.

Many of the ideas — and much of the money — in Mr Johnson’s 10-point plan have previously been announced, but the programme includes new investment for hydrogen, nuclear power, electric vehicle infrastructure and carbon capture and storage.

Mr Johnson said the plan would “mobilise £12bn” of government cash for environmental projects and to support “highly skilled green jobs”; he claimed the public investment could spur up to three times as much from the private sector.

The package is intended as a signal of intent as Britain prepares to host next year’s UN COP26 climate change summit.

The most striking new funding is “up to £500m” for hydrogen, including cash for a new “Hydrogen Neighbourhood” in 2023 and “Hydrogen Village” by 2025. The government will also set a target of 5GW of low-carbon hydrogen production capacity by 2030.

Industrial groups have been testing whether the gas could be used to slash emissions from some of the economy’s dirtiest sectors — including heating, heavy industry and long-distance transport — if it were produced without releasing carbon dioxide into the atmosphere. 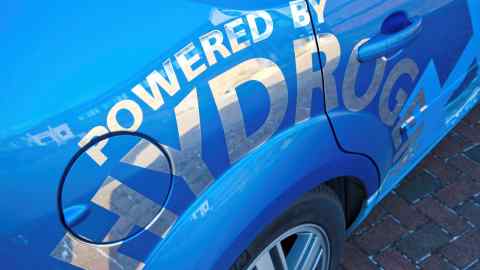 The prime minister earmarked a further £200m for “carbon capture and storage”, an innovative way to store CO2 underground. That money is on top of an existing £800m pledge for CCS made by Rishi Sunak, the chancellor, in the spring Budget. Mr Johnson has now expanded his ambition from two CCS clusters to four by the end of the decade.

The nuclear industry had hoped for a multibillion-pound commitment to new power stations and small modular reactors (SMRs) but instead was given a pledge of £525m for the sector, of which £310m was new money.

Although the government did not name Sizewell C, its support for both new large nuclear plants and the development of small modular reactors will be met with dismay by some environmental campaigners.

Nuclear industry figures are hoping the government will make a “bolder” statement on how large new plants — and specifically the proposed £20bn Sizewell C plant in Suffolk — can be funded after the chancellor’s spending review next week.

The later date for phasing out hybrid cars was described as a “welcome stepping stone” by Edmund King, president of the AA.

The government will also begin a consultation on a date to phase out diesel lorries, a step that would pose technical challenges because batteries are too heavy to give them sufficient driving range.

That will be supported by more than £2.8bn for electric vehicle charge points and grants for low-emission vehicles and the development of car batteries — although over half that money had been announced before.

The largest chunk of the overall £12bn figure was pledged earlier this year: £5bn for new flood and coastal defences.