Before Americans knew the outcome of the 2020 US presidential election, investors had called a winner: high-flying technology stocks that have already soared this year.

Shares of big tech companies such as Facebook, Microsoft, Apple and Amazon surged in the hours after the polls closed on November 3. By the end of the week, the Nasdaq Composite index was once again within striking distance of its all-time high.

Before the vote, some investors predicted the Democrats would take both the presidency and the Senate — a so-called “blue wave” that would trigger rapid and large fiscal stimulus and boost unloved stocks most sensitive to the US economy, such as banks and carmakers. Instead, with the Senate potentially still out of reach and some seats still up for grabs, big tech is back in demand.

Much of corporate America is under siege by the coronavirus, corporate failings are ballooning and many workers are struggling to find jobs. Money managers are wagering that big tech companies will provide a haven in that environment.

“We’re back in a world where growth is relatively scarce and you are willing to pay a premium in the market for it,” said Mike Pyle, BlackRock’s global chief investment strategist.

Investors have been adding to equity positions in recent days and US stock funds have also seen new inflows, according to EPFR.

“There was a lot of cash on the sidelines that waited for some clarity around the election,” said Stephen Dover, head of equities at Franklin Templeton Investments. “I have been surprised that in almost every communication with an investor the question I get is: what is an investor in cash to do?”

Wayne Wicker, chief investment officer of ICMA-RC, a pension plan manager, added to its tech position in the days after the election. “We suffered through the downdraft of the past few weeks and adding to [tech positions] this week has been beneficial for many of the funds we oversee,” he said.

Technology companies are the star performers of the US stock market this year, increasing profits through one of the worst global downturns since the Great Depression. While many travel, hospitality and entertainment businesses are on the edge of insolvency, the pandemic has increased demand for products from the likes of Apple and Microsoft, as workers buy new equipment for home offices and businesses rely increasingly on software and other services.

“There is a dichotomy — at one end you have leisure, cruise and airlines and then at the other you’ve got Amazon and Microsoft,” said Susan Schmidt, head of US equity for Aviva Investors. “It’s a unique moment. We don’t usually see such an extreme disparity between business models.”

Low interest rates also help investors justify the relatively high valuations of faster growing tech companies. Google’s price-to-earnings ratio last week was back near its highest level in more than 10 years, as its stock traded at 26.5 times its expected profits over the next year. Since the election, multiples have expanded for Facebook, Microsoft, Salesforce, Photoshop-maker Adobe and chipmaker Qualcomm.

“Any type of asset that is long in duration combined with low inflation, low rate backdrop have become more valuable,” said John Porter, chief investment officer and head of equity at Mellon. “These big tech names are . . . bellwethers for this environment.”

The prospect of a divided government has investors betting that tax cuts signed by President Donald Trump will remain in place. It has also reduced, but not quashed, the risk of heavy-handed new tech regulation.

“We were worried about a higher tax rate not just for business, but capital gains — tech was an area where we had a lot of capital gains,” said Ms Schmidt.

The rally in technology shares has refocused attention on the derivatives market, where a surge of activity in August and September helped push the broader market higher. David Silber, the head of institutional equity derivatives at Citadel Securities, said traders were now analysing the size of outstanding bullish options bets on big tech and growth companies, which weeks ago seemed like they would expire worthless.

The rally in recent days means dealers who sold the options will need to hedge themselves by buying stock, providing an extra bump to US equities, Mr Silber said.

Some investors cautioned that the tech rally could still unravel. A potential lack of stimulus for several months could leave lasting damage on the economy or cut short the rebound under way, just as coronavirus cases accelerate. Investors also warned that data on coronavirus vaccine trials in the coming days could fire up the broader US equity market and quickly change investor positioning.

“The geopolitical background is an important part of investing, but it’s only part of it,” said Mr Porter. “Stock prices are still driven by earnings. Who is in charge in Washington is important, but it’s just a part of the mosaic.”

Video: US election: how markets are reacting to early results | Charts that Count
Reuse this content (opens in new window) CommentsJump to comments section 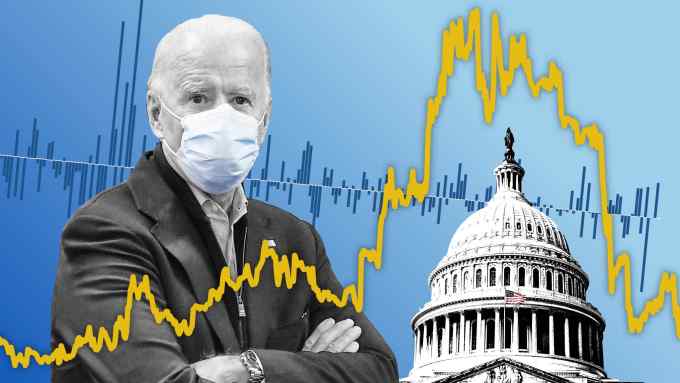