If you think the same, join us
FT People: Energy and mining
See all 20 stories
United Co RUSAL PLC

Tory peer to receive bonus after negotiating for Deripaska

The UK Conservative peer that helped Russian oligarch Oleg Deripaska have US sanctions lifted from his company is in line to receive a bonus for his work negotiating with the US Treasury.

Greg Barker, a former environment secretary under David Cameron, said his work for Mr Deripaska’s En+ Group had been appreciated by shareholders and he would receive a bonus after the US Treasury agreed to remove sanctions in December.

“I will get a bonus,” Lord Barker told the Financial Times Commodities Global Summit in Lausanne. “It’s relatively, relatively modest.”

The payment, the size of which will be revealed in London-listed En+’s annual accounts, could draw further scrutiny to Lord Barker who has been grilled by British parliamentarians for his indirect work with the oligarch. En+ is the holding company of Russian aluminium producer Rusal.

Lord Barker, who entered the upper house of the UK parliament in 2015, took a leave of absence from the House of Lords in February to focus on his role as executive chairman of En+.

The US Treasury placed sanctions on Mr Deripaska and his companies last April, at the time saying it was related to Russia’s “malign activity”, including interference in US elections.

The move threw the global aluminium market into chaos, with Rusal the largest producer of the metal outside of China and a major supplier to carmakers and other manufacturers.

In 2017, Lord Barker was appointed chairman of Mr Deripaska’s main holding company, En+, shortly before it listed in London.

While the sanctions saw many Rusal board members leave, Lord Barker stayed with the company, saying he had a duty to represent minority shareholders, and set about constructing a plan that would see Mr Deripaska relinquish control of the company in return for the removal of sanctions on his companies, even as he remains a designated individual by the US. Earlier this month, he sued the US Treasury in a bid to force it to remove the sanctions imposed on him.

Under the deal hammered out by Lord Barker and the US Treasury, Mr Deripaska’s direct ownership of shares in both Rusal and En+ fell below 50 per cent, in a move designed to sever his control over the companies.

He now holds voting rights over just 35 per cent of the company’s shares. The board of En+ has also been overhauled, further loosening his grip.

Lord Barker said that despite the deal with the US, Mr Deripaska still had a say in how the company was run, but had no control over the board or access to dividend payments.

“He still has a voice in the company,” said Lord Barker. “He is entitled to nominate up four directors to a board of 12. He has legitimate [way] to make his views known. But his direct role in the company is muted.”

In Washington, the removal of sanctions was heavily criticised at a time when relations between Russia and the White House have been under intense scrutiny.

Mr Barker also sketched out his plans for the company telling the FT conference that EN+, which mainly rely on hydroelectric power to run its smelters, could be the “green” or environmental face of the aluminium industry.

“This is an extraordinary opportunity,” he said. “By freeing the board and opening up the company we have the opportunity to go into new markets.” 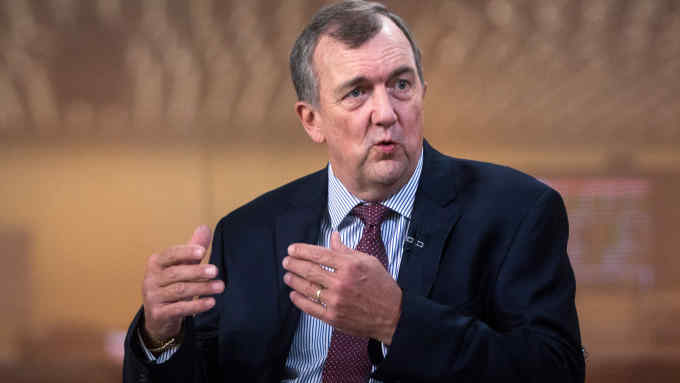