Older workers need understanding from employers about their physical limitations

When Malcolm Emery’s wife died in 2015, his initial instinct was to quit work entirely. After 30 years as a principal chef in catering businesses, he planned to take up new activities, buy a dog and relax. “I was prepared to call it a day,” says Emery, now 62.

But Sodexo, the French services contractor for which he was working, felt Emery still had more to offer. Instead of quitting entirely, it suggested, he should shift to a flexible contract, working 80 days a year. They would be focused on some of the key corporate hospitality events of the British summer — the Royal Ascot race meeting, Henley Royal Regatta and the Open golf championship.

The suggestion, which Emery accepted, is typical of those big businesses increasingly make to older staff as they seek to retain skills amid tight labour markets and declining labour forces in most industrialised countries. In the UK in particular, record high employment levels and declining levels of immigration from the EU mean the battle to secure valuable talent is more intense than at any time on record.

The pull of tight labour markets and the push of worsening pension provision have combined to drive participation in the UK labour market up to a record 72.5 per cent of people aged 50 to 64, only a little under the 75.9 per cent average for 16 to 64-year-olds, according to the Office for National Statistics.

Megan Horsburgh, head of diversity for Sodexo in the UK and Ireland, insists, however, that the change is rooted in employees’ health. Improved lifestyles and better treatments have pushed up life expectancy and meant workers reaching traditional retirement ages still feel fit to work and eager to participate in the labour force, she says. It enhances their wellbeing to continue to have the social contact of work, she adds.

“They’re not wanting to move to doing nothing,” Horsburgh says. “We’ve recognised that if we can help people to phase down, that is really good for us as a business because we are able to keep their experience for longer. But it is also good for them.”

The sentiment is widespread among employers. Lindsey Rix, managing director of savings and retirement for Aviva, the UK financial services company, says her company has a responsibility to support both employees and investors through their different life stages. “We increasingly think of ages from 45 to 60 becoming more of a transition period than a wind-down phase into retirement,” Rix says.

Yet there remains a great deal to be done to ensure older workers are well supported in coping with the challenges that disproportionately affect their age group. These include chronic conditions such as arthritis and responsibility for older relatives.

Christopher Brooks, senior policy manager for consumer and community at Age UK, the charity for older people, says older workers are more likely to be made redundant and find it harder to return to work if that happens. “The labour market is perhaps more flexible,” he says, comparing it with a few decades ago. “I think the flexibility should be a two-way street. Quite often we find the employer holds all the cards, but the flexibility should be reciprocated for the workforce.”

The experience of Andrea Woodhouse, a senior legal counsel at Aviva, illustrates the opportunities and the challenges. Aged 57, she insists she is as eager for stimulating, demanding legal work as when she joined the company in 1996, and that she has a significant contribution to make. “There are assumptions made that when you hit 50 you are not ambitious any more, you are looking to retirement, you are looking to slow down, which is not necessarily the case,” Woodhouse says, speaking at Aviva’s headquarters in the City of London. “I’m still the same person in my head.”

She accepts she and many other older workers need understanding from employers about their physical limitations. She struggles to stand because of back pain and so takes advantage of Aviva’s flexible working policies to take a later train — with more free seats — to work. “The flexible working is brilliant for that,” she says.

Woodhouse’s most severe problem, however — and something she has in common with millions of other women in work — has been symptoms of the menopause. Night sweats, for example, regularly keep her awake in the early hours, providing another reason for a later start at work. The psychological symptoms can be worse, she says, and have included fears at some points that she was developing dementia or had cancer. “[The menopause] is still a taboo subject,” she says. “Even women are still embarrassed to talk about it.”

Patrick Thomson, senior programme manager on fulfilling work at the Centre for Ageing Better, a London-based charity, says employers are getting better at helping staff deal with the menopause but more needs to be done. “It is something that is not talked about at all, even though with some understanding and awareness relatively small changes can pay huge dividends for individuals experiencing it,” he says.

There are assumptions that when you hit 50 you are not ambitious any more, you are looking to slow down, which is not necessarily the case

According to Brooks, the key to dealing with all such matters around age in the workplace is to encourage a “good, open culture”. That can ensure employees do not, for example, feel the need to hide a chronic health condition such as diabetes until a crisis occurs and potentially makes their job untenable.

He accepts, however, that employers often struggle to create such collaborative atmospheres. “The vast majority of employers are small with no human resources functions,” he says. “Most employers don’t know how to approach any kind of difficult conversation.”

Nevertheless, for employers able to help older workers through the occasional crises of working later in life, there can be substantial rewards.

Since January 2015, Bob Pemberton, 68, has been working in a specialist fraud-prevention team at Aviva’s Sheffield office in northern England. He has brought the company nearly 50 years’ experience of working in a range of relevant jobs, including administering benefits on behalf of the government. He is even undertaking training to develop new skills.

The company has been able to help him continue working 35 hours a week, even though he has to care for his 96-year-old mother-in-law. He normally works four long days a week to leave one day free for his caring responsibilities. “Having an attitude to wanting to learn and to move on and to develop — as long as that’s still there, I really do feel age need not be a particular barrier,” he says.

Emery, meanwhile, says “obviously” he has less energy than when he was younger. But Sodexo encouraged him to recruit the replacement for his former full-time role and the two now collaborate on big events. “His energy has made my life easier,” he says. “I’m using my experience to work alongside.”

It is part of an arrangement that Emery accepts, despite his initial instinct, has worked “brilliantly”. “I’m pleased, if I’m really honest, that they persuaded me to stay on,” he says. “To have gone to no hours straight from 70 or 80 hours a week would have been terrible for me. I think I have work balanced with life.”

Get alerts on Ageing Populations when a new story is published

Explore the Special Report
READ MORE
Doctors on the brink 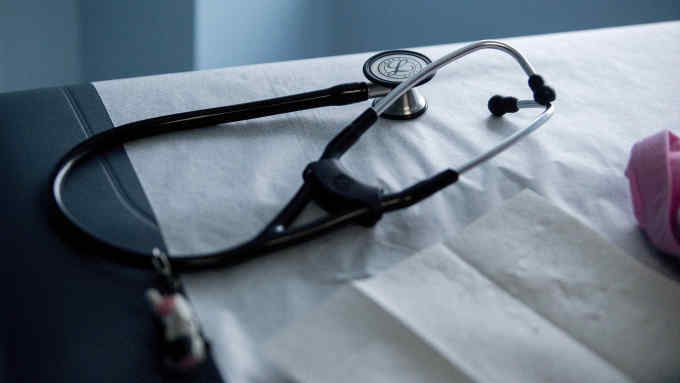