After 45 years in business, Giorgio Armani style looks on the money again

Closing the last day of Milan’s menswear schedule, the Giorgio Armani label returned after a season’s absence (he showed his men’s and women’s mainline clothes alongside one another for winter during Milan’s February womenswear showcase). It was a homecoming, of sorts — both because of that, and because Armani chose to present not in his cavernous concrete Tadao Ando-designed teatro, but in the courtyard of his business headquarters — not quite Armani’s own place, but he does live just a few palazzos down the road. This headquarters, the Palazzo Orsini, is something of a chink in the indefatigable Armani aesthetic armour — it isn’t very Armani on paper (it being a grand 17th-century neoclassical mansion purchased by Armani in 1996), but its courtyard is geometric and simple, and bore a narrow runway in signature Armani beige.

In line with the homecoming spiel there was a palpable shift here towards intimacy. Clothes felt intimate too — many slithered across bare skin, not salaciously (this is Armani) but nonetheless sensually. It’s his shtick: “I saw men wearing rigid jackets that concealed the body, imprisoning it in a certain sense,” Armani told me earlier this year. “I was looking for the exact opposite: clothes that created ease of movement and comfort. That’s how I came to create the first unstructured jacket in the mid-1970s, ridding it of lining and padding. Bit by bit, I also changed the arrangement of the buttons and modified the proportions: a process that radically transformed this garment. Since then, my jackets have always been comfortable, lightweight and sensual, even in their construction.”

Armani did that at the start of his career — he is the only one of his contemporaries still left practising in Milan, perhaps even the world following the death of Karl Lagerfeld this year. He is continuing along the same route today, perfecting his style. The opening looks of his Spring/Summer 2020 show were kind of perfect: suits with cross-your-heart waistcoats, cut flat and Japanese-style, creased linen suits, a palette of chocolate brown and navy, another distinct Armani shade. Later, those waistcoats came out alone, with loose trousers, in uncharacteristic brights — crimson, duck-egg blue. They wound up looking a little like costumes for Disney’s live-action version of Aladdin.

But the first section was what stuck, with nary a mis-step — the muted tones, that eased tailoring. It’s a look that feels like it has a new currency: on the streets of Milan there have been men wearing creased linen cut wide, mismatching tonal jackets and trousers, something that should look retro, a throwback to the early 1990s when Armani ruled. In actual fact, it looks newly modern. That’s the thing with Armani, it’s not about him moving with the times, but the times shifting back to him. That moment seemed to have come again. And, in staging this up-close and personal show, Armani capitalised.

Back in 2018, Armani warned that turnover and margins would slide for two years (after a fall of 7 per cent year-on-year for 2017) before the company returned to profit in 2020. Is Armani a soothsayer? Entirely possible. Or maybe, after 45 years in the business, he can simply see the way fashion is shifting, especially when it’s coming back to him. 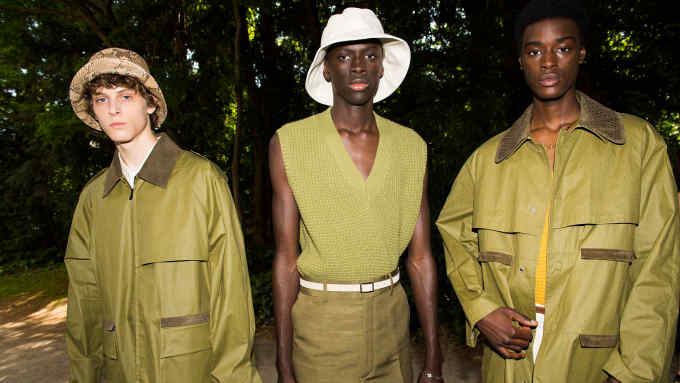