Despite threats of a possible exodus after draconian security legislation, the financial hub retains many attractions

American celebrities like Snoop Dogg and Lena Dunham are well known for making empty threats to move to Canada when election results are unfavourable. Similarly, fund managers in Hong Kong — who threatened to move to Singapore after China clamped down on protests — are now earning a similar reputation.

Despite reports of a possible exodus due to Beijing imposing a tough national security law on the territory, fund managers still expect revenue and assets to climb in the coming years.

According to Brendan Ahern, the chief investment officer at KraneShares, a China funds specialist, it was “a little bit naive” to expect that established companies would exit Hong Kong’s highly profitable money management market.

“If you [don’t have the] boots on the ground, there’s plenty of competition that [does],” he says, adding that businesses have been expecting Beijing’s tightening grip for a long time.

Additionally, more wealth managers are creating jobs in Hong Kong rather than shipping them overseas, Mr Ahern says, citing HSBC’s hiring of 3,000 wealth managers in mainland China and Hong Kong as an example.

But beneath the surface, some fund managers are now worried.

Some expats fear they could lose their visas under the new security law, following a statement in June from the Chinese foreign ministry spokesman Zhao Lijian, who said China would ban Americans who “behave badly in Hong Kong affairs”.

Meanwhile, even locals worry they could face China’s wrath if they are caught supporting anti-government campaigners.

The new security law has had a chilling effect on fund managers’ willingness to speak to the media. Over a dozen financial institutions were contacted for comment for this piece: all declined. 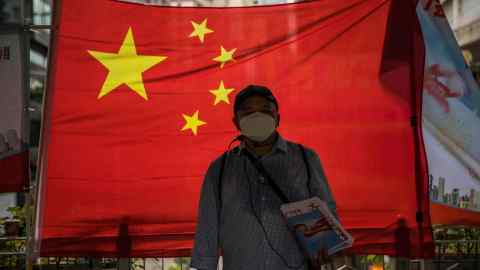 Behind closed doors, some have hatched plans to leave in the coming years. Leaving is easier for expats, who are typically better paid and have greater ability to abscond, says a portfolio manager who asked to remain unnamed.

He says: “The national security law is causing some expats to question whether they want to stay on. The chief executive [Carrie Lam] can appoint the selected judges that take on cases related to national security law. [In the past] the judiciary arms have had independence . . . It makes people fear.”

But the new law is not the only reason fund managers are considering leaving. The Covid-19 crisis has been taken as a moment for fund managers to reflect and reconsider.

The savings honeypot in Hong Kong is controlled by the banks. According to a speech from Ashley Alder, chief executive of the Securities & Futures Commission of Hong Kong, the regulator, just three banks account for 70 per cent of the country’s retail fund sales. Of these, HSBC, is the most influential name.

But winning the banks over is difficult at the best of times. These commercial difficulties have been sharpened by the coronavirus, which has caused money managers worldwide to re-examine the funds they offer. The number of regulated funds in Hong Kong has shrunk this year, suggests data from the SFC. But for fund managers wanting to leave for political reasons, there are no clear alternatives. Singapore is usually the destination cited in threats to leave. But Singapore is a long way from Beijing and companies trying to service China from Singapore can therefore face logistical difficulties. They also run the risk of looking uncommitted to the Chinese market.

Hong Kong’s lifestyle is also harder to leave behind. From the hiking trails and mountains, to the food and weather, life in Hong Kong is good to fund managers. Sweetening the deal is the lower tax rate and labour costs, which allow expats to hire domestic help — such as cooks and cleaners — who do their housework at low rates.

Such comforts mean expats can struggle to readjust when they come home, says Glenn Hodgeman, a former Citi trader. “When you’re living there, it is easy to romanticise about life back home in Sydney or wherever,” he says.

“But the longer you stay, and the more accustomed you become, the harder it can be to leave. I don’t think many of the fundies or traders threatening to leave will carry through with it.”

Not everyone is planning to leave, of course. And some have a degree of sympathy — however small — with authorities. According to Michael Edesess, a professor at the Hong Kong University of Science and Technology, local support for the security law is often overlooked by western media.

Still, questions remain about what the strained relationship between the US and China may mean long term.

According to Tommy Wu, an economist at think-tank Oxford Economics, the US ripping up Hong Kong’s special trade status is unlikely to cause permanent damage. And the security law has done little to undermine Hong Kong’s status as a finance hub.

He says: “Hong Kong’s financial sector has benefited from US-China tensions because a lot of the mainland companies are now hesitating to list in the US. This translates into a continuous pipeline of large IPOs in Hong Kong, and ultimately into capital inflows.”

Inflows into Hong Kong public funds rebounded strongly in the second quarter, with US$3.5bn, compared to the first quarter where they saw large net outflows of US$2bn, data from the SFC indicates.

Mr Wu adds that the Hong Kong dollar and the Hang Seng index, Hong Kong’s share market gauge, were both high, suggesting investors had faith in the territory’s economy.