Kuwaiti pension fund Wafra agreed to pay $909m for the building in late August, well above what many believed it would fetch when Coca-Cola decided late last year to put it on the market.

In the mother of all flips, Wafra then sold its interest this week to BVK, a German pension fund, and a Turkish partner, Bilgili Group.

Whatever else the topsy-turvy sale means, it appears to confirm New York commercial property’s hearty appeal to institutional investors, many foreign, at a time of historically low interest rates around the world.

Pension funds, sovereign wealth funds and their ilk have long been a force in real estate. Yet commercial property appears to be attracting fresh attention at a time when bonds offer so little yield and equity markets have been so volatile. 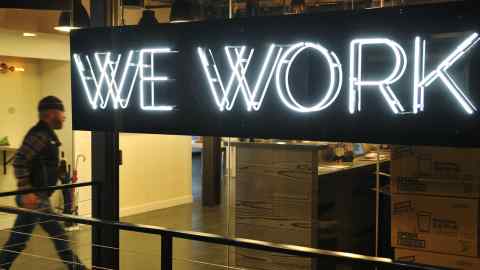 Private equity groups Blackstone and Brookfield have captured attention in recent months by closing their largest ever property funds — $20bn and $15bn respectively. Beneath those headlines, pension funds in places such as Alaska and Oregon have been quietly increasing their own real estate allocations.

One of the latest moves came from the California State Teachers’ Retirement System, which this month said it would boost its real estate investments from 13 per cent to 15 per cent of its portfolio while dialling back public equities.

A recent survey by the Pension Real Estate Association found that respondents had increased their overall real estate allocation this year from 8.9 per cent to 10 per cent. Half expect to increase that further over the next two years; only 9 per cent expect to cut back.

That chimes with conversations that Jacques Gordon, head of research and strategy at LaSalle Investment Management, is having with investors grappling with the realisation that a fifth of all government bonds produce zero or negative interest rates.

“Clients tell us when they’re holding bonds that are producing no income or negative income, they need us to stay allocated to property and they need us to move upward,” Mr Gordon said.

That is creating a challenge to find worthwhile investment, Mr Gordon added — as “prices keep rising, the yields keep falling”.

There is a rich history of foreign institutions stumbling in New York, the world’s largest and most liquid commercial real estate market. One of the more recent may be Japan’s Unizo Holdings, which is in the midst of shedding its New York portfolio after running into complications.

Chinese investors have also retreated, albeit for other reasons. They bid up landmark properties such as the Waldorf Astoria hotel in 2014 until capital controls imposed by Beijing abruptly dried up the trade and have since turned them into net sellers.

“You need to have a local partner,” according an executive at one New York developer.

It is not clear how the 711 Fifth Avenue transactions will pan out. Coca-Cola has owned the 1927 building since it bought Columbia Pictures in 1982. It sits on a prestigious corner and features prize tenants including the Allen & Co boutique investment bank.

But its retail situation is suffering the same blight as other parts of the city as shoppers move online. Ralph Lauren still pays about $30m in annual rent for most of the building’s ground-floor retail space. Yet sales have been so weak, even on Fifth Avenue, that the company opted two years ago to close the flagship store it built there. The space sits empty even though the lease runs another 10 years.

With that in mind, some local bidders believed the property would go for no more than $700m.

What may have tipped the balance, according to Mr Harmon, was the determination of institutional investors to put their cash to work. He cites the measure of “dry powder” — money investors have committed to real estate funds but which has not yet been deployed. It has roughly doubled over the past four years to $204bn.

To capture a share of it, Cushman sought to cast a wide net beyond the narrow clique of New York developers that once would have been the prime market for 711 Fifth Avenue.

It produced a glossy book to emphasise the building’s history and prime location — features that might give comfort to a foreign buyer. It also provided reams of data on everything from retail rent trends in the surrounding neighbourhood to projected cleaning costs over 10 years. They are the sorts of details demanded by a more deliberate group of investors who may have to appeal to layers of committees before bidding.