State Street Global Advisors’ SPDR S&P Retail ETF (XRT) has been one of the biggest winners — and losers — from this week’s surge in shares in GameStop.

The ETF has risen by 24 per cent this week, largely off the back of its exposure to the struggling video game retailer, which has seen its shares rocket by as much as 255 per cent in the past week as an army of retail investors put the mother of all short squeezes on hedge funds that had shorted the stock.

Investors have dumped the ETF en masse, however, with its market capitalisation tumbling from about $700m to $200m on Wednesday, said Matthew Bartolini, head of SPDR Americas research at SSGA.

As well as taking profits, investors are likely to have become increasingly nervous about GameStop’s surging weight in XRT’s portfolio.

As of Wednesday’s close, GameStop accounted for 19.9 per cent of XRT — comfortably ahead of the combined 11.8 per cent weighting of the rest of its top 10 holdings.

While this would be a punchy exposure for any ETF, it is particularly out of kilter for a fund designed to track a “modified equal weighting index”, providing the potential for “unconcentrated industry exposure”, and which is not due to be rebalanced until March 19.

“The fund has lost assets. We have seen more outflows [than inflows] over the past few days. That has coincided with an increase in trading volumes,” which hit a record $2.9bn on Wednesday, Mr Bartolini said, compared to a one-year daily average of $210m.

“It’s a completely anomalous market environment and it has caught a lot of people by surprise.”

XRT is unique among ETFs that have a significant exposure to GameStop because it has a largely institutional investor base and is commonly used as a hedging tool, according to analysis by Citi.

“Near term, the fund’s viability for that use case may be altered given the high GameStop allocation,” Citi said.

However, the $220m Wedbush ETFMG Video Game Tech ETF (GAMR) has bounced a greater still 30 per cent in the past week, again largely due to its outsized exposure to GameStop, which had risen to 27 per cent as of Wednesday’s close.

While this leaves the ETF in pole position to benefit from any further gains in the day trader-driven stock, it also leaves investors highly exposed to any reversal — seemingly undoing at least some of the diversification benefit of investing via a pooled fund — until the ETF’s next scheduled quarterly rebalancing date, again on March 19.

“Investors seeking the diversification benefits of ETFs need to be mindful what is inside to avoid taking on undue risk,” said Todd Rosenbluth, head of ETF and mutual fund research at CFRA.

However, with several retail trading platforms blocking investors from trading some highly volatile stocks such as GameStop on Thursday, ETFMG, the issuer of GAMR, touted the fact that “investors can access GameStop through the ETF”.

Mr Bartolini said the recent events underlined the need for investors to do their due diligence on ETFs and to understand the index reweighting methodology. “It’s the old investor adage of knowing what you own,” he said.

However, he added that the volatility also underscored the benefit of ETFs that disclose their holdings on a daily basis, with this transparency providing “an additional level of comfort” to investors.

The biggest winner of all, though, appears to be the $163m Direxion Daily Retail Bull 3x Shares (RETL) ETF. Although it “only” has exposure of 7 per cent to GameStop, its three times leveraged exposure — reset daily — means it has jumped 77 per cent in the past week.

Overall, however, the ETF industry is relatively unexposed to GameStop. Several thematic ETFs exposed to the video gaming sector, such as Global X Video Games & Esports (HERO), Roundhill BitKraft Esports & Digital Entertainment (NERD) and VanEck Video Gaming and Esports (ESPO) did not even hold GameStop stock, according to CFRA.

In total, just 63 ETFs own the shares, according to Mr Rosenbluth, despite it now having a market capitalisation of $240bn, less than the 120 and 88 respectively holding US consumer discretionary sector peers such as Gap and Under Armour.

This is perhaps unsurprising, however, with Gap and Under Armour being among the smaller constituents of the widely tracked S&P 500 index, while GameStop is merely the largest weighting in the far less widely followed S&P Small Cap 600 Index.

The S&P Dow Jones Index committee has discretion to move a company between indices, but Mr Rosenbluth said he “did not expect GameStop to be added to the large-cap index in the near term, given that the recent price action could be short lived”. 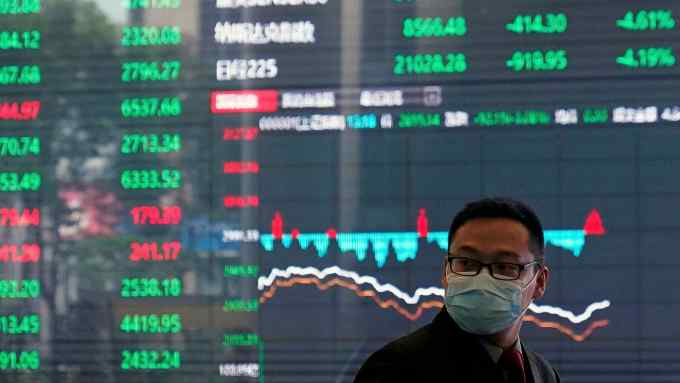