Exactly 70 years ago, on September 19, 1946, Sir Winston Churchill delivered his famous speech in Zurich calling for the creation of “a United States of Europe”.

Britain’s wartime leader was revered across the continent for his role in the defeat of Nazi Germany, despite the fact that he had lost office as UK prime minister after the general election of 1945. His ringing call for reconciliation between France and Germany, and “the re-creation of the European family”, struck a chord for both the victors and the vanquished emerging from the devastation of two world wars. It inspired a European movement that led to the creation of the Common Market, and, ultimately, to today’s European Union.

As Churchill urged a Franco-German partnership to lead his vision of a new Europe, he declared that Great Britain and the British Commonwealth, along with the US and USSR, should be “friends and sponsors” of the project. He did not talk of the UK becoming a member itself.

“We are with Europe, but not of it,” he wrote in an earlier essay. “We are linked but not comprised.” That ambiguity has haunted Britain’s relationship with its continental neighbours ever since, culminating in the UK referendum vote on June 23 for Brexit.

First the UK refused to join in 1957, dismissing the negotiations for the Treaty of Rome as irrelevant. Then, when Harold Macmillan changed his mind, for fear of being left out of an economic success story, his membership bid was vetoed by France’s president Charles de Gaulle. When Edward Heath finally succeeded in negotiating membership from 1973, it was seen by many as a defeat for UK exceptionalism, not a victory for European solidarity.

How will the future look for the City, entrepreneurs, farmers, industry and from a political perspective?

That British attitude is rooted in its imperial history — Churchill’s great passion — and a perception of British security, its interests and its diplomacy, as global, not narrowly European. That feeling, along with resentment at the apparent roles of Germany and France in setting the European agenda, was a constant subtext to arguments in favour of Brexit.

Yet, in spite of the centrality of strategic concerns to the intellectual UK debate on Europe, the subjects of foreign policy and security received scant attention during the referendum campaign. It was dominated instead by the debates on immigration and the economy.

“When foreign, security and defence policy was discussed . . . it was predominantly in terms of the costs and benefits to the UK of being a member of the EU,” says Richard Whitman, professor of politics and international relations at the University of Kent. “There was no substantive rehearsal of what the future EU-UK foreign and security policy relationship might be with the UK outside the EU.”

It was a curious and alarming omission, given that such questions have always been at the heart of British historic hesitation about the EU.

For Churchill, as for the overwhelming majority of the British establishment in those early postwar decades, the British empire (and the Commonwealth that succeeded it) and the “special relationship” with the US, were the nation’s two most important strategic priorities. Nato was seen in London as much the most important alliance in Europe. The Common Market, launched in 1957 by the Treaty of Rome, was seen as largely irrelevant to national security. 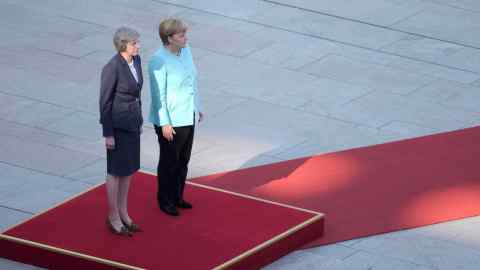 In the Brexit camp, the idea of reviving an Anglosphere centred on the “special relationship” between London and Washington (especially in intelligence co-operation), and underpinned by close ties with the “old” Commonwealth of Australia, Canada and New Zealand, was very popular. The question now is whether that romantic attachment to old imperial and English-speaking ties can be turned into an effective policy. The world in 2016 is very different from that of 1946.

“The number one problem is that everyone else has moved on,” says Prof Whitman. “They have been pretty successful at forging ‘post-British’ foreign policy identities.” Australia and New Zealand have refocused their foreign and security policy on the Asia-Pacific region, in which China is the dominant player. Canada has defined itself as an independent-minded US neighbour with increasingly strong Asia links to balance its traditional European ties.

As for the US, successive regimes have made it clear that they see European integration as an essential part of western security policy and they have made no secret of wanting the UK to be a full-hearted player. Opinion in Washington was overwhelmingly opposed to the idea of Brexit during the referendum campaign, with the exception of Donald Trump, the Republican presidential candidate.

The expectation now is that the UK will throw itself with redoubled enthusiasm into beefing up the Nato alliance, to make up for its gradual withdrawal from the EU

Leading members of the Brexit camp, such as David Davis, now the minister responsible for the exit negotiations, and Liam Fox, minister for international trade, have always based their arguments on the irrelevance of the EU to UK security, and the far greater importance of Nato. The expectation now is that the UK will throw itself with redoubled enthusiasm into beefing up the Nato alliance, to make up for its gradual withdrawal from the EU. That could mean bolstering the UK military support for the Baltic republics, however much such a move might infuriate Moscow.

For the rest of the EU, the prospect of UK withdrawal is a mixed blessing. On the one hand, the most serious and rapidly deployable military forces in the EU are those of Britain and France. The UK has played a leading role in the anti-piracy operation off the coast of Somalia. British diplomats have also played an important role in establishing the European External Action Service — the EU’s own diplomatic arm.

On the other hand, the UK has been increasingly hostile to the development of an EU defence policy, and to any weakening of intergovernmental control (and therefore a national veto) of security policy. British departure from the EU would free the other member states to move forward with the creation of a stronger military operational and planning core, as favoured by France, and more support for a stronger European defence industry.

In the three months since the referendum vote, there has been no indication from Boris Johnson, the new foreign secretary, or prime minister Theresa May as to how they see the future focus of foreign and security policy.

The truth is that the process of negotiating Brexit, and reorganising the UK-EU relationship for the future, is likely to dominate everything else on the British government’s agenda for years to come.

“The UK’s key foreign policy priority for the foreseeable future will be sorting out its relationship with the EU,” says Prof Whitman. “We will have to devote far more energy and effort to the EU than to the wider world. We will need more EU experts than ever before.”

That is the irony of the Brexit decision. At least for the foreseeable future, it will mean a lot more EU, rather than less, on the UK government agenda.