Fashion shows are a strange thing, halfway between a trade-fair booth and a rock concert. The designers are the superstars — at least until you have Bella Hadid either in a show or at a show. She’s been doing both at Paris menswear week (as some shows feature womenswear), and the scrum that materialises upon her entrance or exit is extraordinary. But so too are the clamouring crowds, largely teenaged, that line up behind crash barriers outside shows desperate to . . . what? Get in, perhaps, to see the designers they idolise; or maybe just to be seen in adjacency to a Hadid.

Rick Owens was thinking about performance in his clothes — both actual rock stars, and how he is perceived, and perhaps expected to act, as a designer. He talked about the performative nature of the “Instagram generation” — Owens is 58, and says he’s feeling his age — and he offered clothes that not only matched them, but trumped them. He trumped them by looking at David Bowie and the Ziggy performance wardrobe created for him by Japanese designer Kansai Yamamoto. His show opened with a version of Bowie’s one-legged knit jumpsuit in pilled and distressed grey cashmere jacked up on monstrous platforms. There’s always something monstrous, sometimes grotesque, in what Owens does — here he used lurid, toxic colours like chartreuse and blue, and deliberately bad-taste animal prints. They were look-at-me clothes, with nuke-sized pointed shoulders and those ubiquitous platforms hiking the models up to impossible-to-ignore heights. Owens has been doing those platforms for men for a few seasons now — he also sells them, for just over £1k. This season, there have been echoes of them all over the place, both true and tricky platforms, but also a general move towards heftier shoes, with Owens’ handwriting all over them.

That’s an example of how even the most extreme facets of Owens’ aesthetic can trickle down and influence others. After this show, maybe we can intuit a return to bigger, bolder shoulders and more structured silhouettes. Or maybe the big takeaway will be Owens’ take on comfort-dressing as the new decade uncomfortably dawns. He wrapped his models in soft, dusty shades of cashmere, often sloppy and slithering around the body. Do men today want to terrify, or seduce? And aren’t both another kind of performance, actually — dressing in huggable layers as much a conscious choice as sporting demonic Crawford shoulders.

Kim Jones, the artistic director of Dior’s menswear, inherently understands the paradox of fashion, of clothes that need to make a big enough statement to justify a giant tent pitched in the Place de la Concorde, but that also need to intrigue up close. It’s a tightrope act he accomplishes with aplomb. This collection also used the might of Dior to say something warm and fuzzy and emotional — Jones used it to pay tribute to Judy Blame, the innovative designer, stylist, artist and a half-a-dozen other polymath roles who died in 2018. A cult figure, Jones had known him since he was a teenager, and had been influenced by his style for years before — part of a collective of creators whose “look” was dubbed Buffalo, it was instrumental in shaping the aesthetic of the 1980s as a whole. Blame’s work, often resulting in jewellery and accessories, involved found objects, the undervalued and lost, elevated to the very highest of high fashion. There’s some kind of mirror there, of the one-off one-upmanship of custom-made haute couture — Dior is one of the few houses who continue to create that, designed by Maria Grazia Chiuri and shown next week. But it is also reflective of the way Jones himself works with pieces from Dior’s archives, dusting off old clothes and old ideas, and combining them together to make something new.

So this collection was dedicated to Blame, elevating his legacy in turn, using that global spotlight inevitably trained on the behemoth brand to say something personal to Jones, and to give his friend just deserts. There were pieces created in collaboration with the charitable foundation that looks after his estate — Blame jewellery items were reworked, and his favoured motifs recurred, assembled into a “Toile de Judy” that played on traditional French cretonnes. The safety pin appeared often — in true punk fashion, it pierced Dior’s logotype just as it has pierced Queen Elizabeth II’s face, here pricking the balloon of this venerable Parisian institution. That’s something Jones does often — challenging our ideas of Dior, and even Dior’s ideas of Dior, all the while connecting the clothes intrinsically with the house’s heritage. Which is an exercise in clever reverence and intricate research for the designer and his team, and something the brand is proud of — evidenced by multiple Dior exhibitions and publications, hurrahing the house’s patrimony and the long lines of provenance behind the clothes.

But — and here’s the clever thing — Jones also realises that plenty of consumers don’t overwhelmingly care about that stuff. Lots of them just want to buy great clothes that sit in the here and now, without caring that Jones has painstakingly embroidered a cashmere cape with a decontextualised pattern taken from a 1960s haute couture evening gown, or that the colour palette of pale blue and Dior grey reflect the windswept sea of Normandy, where Monsieur Dior was born and raised. They just want something exciting, and poppy, and maybe beautiful, and are happy to consume the performance of the surface. That Jones can satisfy both those seeking pure, unadulterated product, and the fashion geeks (like myself) who rhapsodise over his intricate waltz through Dior’s archives is exceptional design — what he is doing with Dior’s archives, inventing and reinventing house trademarks and emblems at a ferocious pace, is one of the most exciting regenerations of a historic brand in recent memory.

It also settles the niggling question that sits over this whole week: with sustainability at the forefront, who really needs anything else? Jones’ clothes are some of the very few that electrify an instinct to acquire: with his pearl-studded versions of the Dior Oblique logo, formal shoes dissected with zips, great swirling moire coats with a healthy helping of camp — the same fabric is cut into smart sports bombers, for the more retiring type — and lots of superb suits, the story of the season. They guarantee to sustain Dior’s bottom line, a healthy contributor to the 16 per cent growth enjoyed by LVMH in the first nine months of 2019, taking their turnover to €38.4bn. That’s a different kind of fashion performance, of course. But, besides making lots of clothes, and lots of money, Jones’ real achievement at Dior is to not only perpetuate a legacy, but create a new one.

Follow @financialtimesfashion on Instagram to find out about our latest stories first. Listen to Culture Call, the FT’s transatlantic culture podcast, which interviews people shifting culture in London and New York. Subscribe at ft.com/culture-call, Apple Podcasts, Spotify or wherever you listen to podcasts. 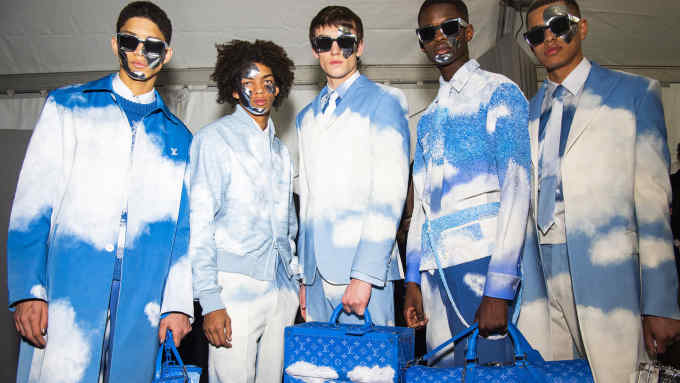