Whisky is more interesting than it’s ever been, with new distilleries and styles proliferating all over the world. But there’s one type in particular that’s set to get a lot more airtime this year – and that is rye.

Peppery, nutty and spicy-sweet, rye is usually associated with North America. It was the first whiskey (to use the US spelling) to be distilled by settlers in the 1700s. And it was the style that prevailed, particularly in the north-eastern states, until after Prohibition. Most of the original whiskey cocktails – the Manhattan, the sazerac, the Old Fashioned – would have been made with rye.

Over the course of the 20th century, it lost ground to more easy-sipping, corn-based bourbons, and production all but dried up. Even today, long-aged Kentucky ryes such as Van Winkle 13-year-old and Sazerac 18-year-old can be incredibly hard (and expensive) to come by. But a new generation of craft distillers is now resurrecting, and re-imagining, rye – often with exciting results.

Denmark’s maverick distillery Stauning makes a series of experimental rye recipes using locally grown grain and unusual casks. “For us, it was important to make something that’s really Danish, and rye is the most used grain in Denmark,” says co-founder Alex Hojrup Munch. “And it’s a grain with so many flavours – just think how much flavour rye bread has compared with other types of bread.”

Stauning makes ryes finished in mezcal and vermouth casks, and others smoked with heather and peat, but my favourite is its signature Stauning Rye, a more classic rye with notes of spicy banana bread, Earl Grey tea and a caraway sweetness that’s very pleasingly Scandi (£56.95, masterofmalt.com).

Bad rye will take the roof of your mouth off. But the really good stuff has a unique ability to be strict and seductive in a single sip. “It’s the pinot noir of the whisky world,” says Dawn Davies, buyer at The Whisky Exchange. “It’s temperamental, hard to work with, but potentially the most beautiful too.”

Ryes are usually leavened with at least one or two other grains: malted barley, corn or wheat. But some makers go the whole hog. The Dutch rye Millstone 100 is made from 100 per cent rye (and aged in 100 per cent American oak and bottled at 100 proof), resulting in a powerful, concentrated spirit that top-lines those characteristically antique-y notes – wax, varnish, sandalwood – with an unexpectedly pretty floral/grassy perfume (£75.90, thewhiskyworld.com).

Rye is an obsession for The Gospel distillery in Melbourne. “It’s a great midway point between sweet and savoury whiskies,” says its co-founder and director Andrew Fitzgerald. “It’s not as sweet as bourbon and maintains that distinct pepper and baking spice character – especially when un-malted.”

How To Spend It
Whisky collecting: meet the millennial dram busters 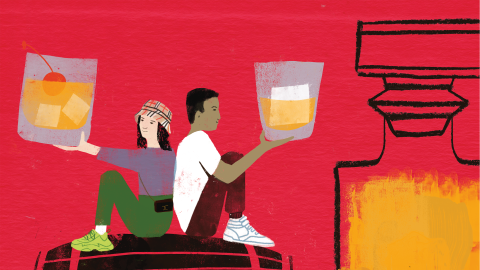 Gospel sources all its rye from Murray Mallee, an arid region in South Australia where the grain grows smaller and, Fitzgerald believes, more concentrated in flavour. “It’s that distinctiveness we try to celebrate.”

The UK has a new crop of ryes coming, too. This spring, The Oxford Artisan Distillery will unveil its first fully fledged rye, made with locally grown heritage grain. And the East London Liquor Company recently released a rye aged in a mix of oak and chestnut casks (chestnut would be against the rules for a Scottish single malt but was not uncommon for English whisky back in the day). Dark and tannic, it’s rye at its most intense – roasty coffee, bitter chocolate, and Black Forest gateau with squishy cherries (£75, eastlondonliquorcompany.com).

Fife’s innovative new Inchdairnie distillery also has a rye in the works –among the first to be made in Scotland for more than a century. RyeLaw won’t be released for several more years, but it already tastes pretty good.

And don’t overlook the old guard: the majestic Sazerac 18-year-old (£1,200, thewhiskyexchange.com); Heaven Hill’s Rittenhouse Rye 100 Proof (£39.90, masterofmalt.com), so spicy and full-flavoured it’s almost chewy; and the splendidly cranky Wild Turkey Rye (£27.92, thedrinkshop.com) that might not be as fancy as some – but no other whiskey will give you a better rye bang for your buck.