Snapchat, the smartphone social network which allows users to send temporary photos and videos to one another, first made headlines as a teen sexting app. But now that it has 150m daily active users and a reported valuation of more than $15bn, brands are working out how they can capitalise on its intimate, playful tone and its ability to engage the attention of millennials and their Generation Z successors.

It is the hot ticket among marketers at brands as diverse as sports drink Gatorade and Burberry, but jewellery and watch brands have been slow to embrace the platform. Scott Galloway, founder of business intelligence company L2, finds this unsurprising: “Snapchat’s ephemeral nature doesn’t work with the highly manicured moments these brands strive for,” he says.

Tiffany is one jewellery brand tapping into Snapchat. In July it became the first jeweller to create its own sponsored “lens” templates on Snapchat messages as part of its #LoveNotLike campaign, promoting its entry-level “Return to Tiffany Love” collection. The lens, which was available for 24 hours, invited users in the US, Italy and Australia to layer Tiffany-branded “filters”, including animated white and Tiffany-blue hearts, over their pictures and videos and share them with friends.

While Tiffany declined to share exact details about the filter’s performance, it did confirm that millions of users played with it for more than 20 seconds, a measure of success given users’ fleeting attention span. “We are really pleased with the results,” says Diana Hong, Tiffany’s creative director for digital marketing, adding that the company plans to expand upon the strategy in future.

Lucie Greene, worldwide director of the Innovation Group at J Walter Thompson Intelligence, says the key to Tiffany’s success on the platform has been adapting its content and tone of voice. “Snapchat is playful, and that’s very counterintuitive for luxury brands,” she says. Ms Greene points to Tiffany’s initial Snapchat outing in April, when it invited users behind the scenes at its usually private Blue Book Gala, with video footage from actresses Reese Witherspoon and Eve Hewson.

Tiffany did not disclose what it paid for the sponsored lens, but the company did acknowledge that it was the most significant of its Snapchat advertising purchases, which also included traditional passive video adverts on the platform’s Discover channels, as well as a geofilter, an exclusive Tiffany-branded image that could be layered over a user’s picture or video if they visited one of the company’s US stores.

Ms Hong says the lens’ value lies in the degree of active engagement it invites from users, which is no mean feat when communicating with younger consumers who are tech-savvy but cynical about advertising. “It’s a clever feature of Snapchat,” she says. “It’s why the app is so sticky: there is always something new to try.”

Reality TV star Kylie Jenner, reported to have one of the largest followings of anyone on the network, also published an unsolicited post using the Tiffany filter, providing further priceless brand exposure, Ms Hong adds.

Advertising industry publication Ad Age has reported that sponsored lenses can cost advertisers between $500,000 and $750,000. Given their 24-hour lifespan and Snapchat’s limited measurement tools available for brands to evaluate sales or awareness growth as a result, this makes the platform, in terms of return on investment, “the most expensive media buy around at the moment”, says Mr Galloway of L2. “It is the ‘it’ platform around right now and they’re really taking advantage of that with their pricing,” he adds. But it will need to show evidence of “motivating purchase as well as promoting awareness” to justify its high advertising rates and investor valuation.

Gillian Tett
Spending in the age of Snapchat 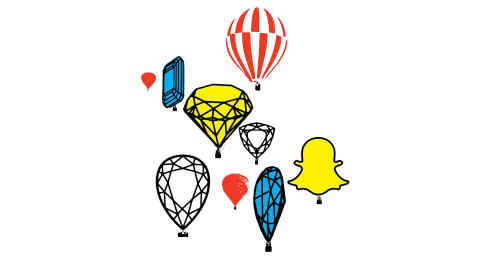 Snapchat, which announced a partnership with the ratings company Nielsen earlier this year, is taking steps towards doing exactly that and providing sophisticated advertising measurement tools that can compete with the likes of Facebook and Google. “The primary return on investment right now for brands is being seen as an innovator,” says Mr Galloway.

This cool-kid association makes Snapchat particularly attractive to Swiss watch brand Hublot, says chief executive Ricardo Guadalupe. The company has shared on Snapchat sporting events such as Formula One, where Hublot partners with Ferrari, and football championship Euro 2016 for which it was the official watchmaker. “Hublot is a dynamic brand and always has to be first, unique and different,” Mr Guadalupe says, “so when there is a success on a new media platform, we have to be part of it.”

“Snapchat allows us to have visibility on a social network mostly used by the new generations, who can then become our clients of tomorrow,” says Mr Guadalupe.

For other brands, today’s clients are already on Snapchat. Alex and Ani, the US accessories brand known for its charm bracelets, priced between $18 and $125, targets millennials on Snapchat with frequent posts that include product launches and competitions, such as the one at the recent Lollapalooza music festival in Chicago, driving users to the brand’s on-site pop-up store.

“Social media has been a key part of our consumer engagement, really since inception. It’s how our business has grown,” says Andrew Moore, the company’s senior vice-president for digital and ecommerce.

It is clear that Snapchat’s format is considered powerful: in August, Instagram, Snapchat’s larger, Facebook-owned rival, announced the introduction of Stories, a Snapchat-esque addition that invites users to post more spontaneous content which auto-destructs after 24 hours. The question is whether Snapchat can rise to Instagram’s revenues, estimated by Credit Suisse at $570m in the first quarter of this year.

Get alerts on Ricardo Guadalupe when a new story is published