How to level up your investment portfolio

As a Brummie of a certain age, I remember the faded grandeur of Birmingham city centre in the 1970s, with the Victorian and Edwardian buildings looking more than a bit worse for wear.

Already, a decade before Britain’s financial Big Bang wiped out the Birmingham Stock Exchange, it was clear that the heyday of the city’s stockbroking community had long passed. The paint in the offices around the stock exchange was peeling and there were posters plastered on the venerable facades.

In truth, even at their 19th century peak, Birmingham’s brokers had struggled to compete with London. As early as 1911, a local metalworking giant — Guest Keen and Nettlefolds (later GKN) — listed not in the shadow of Birmingham’s St Philip’s cathedral but of St Paul’s.

It’s useful to remember that the roots of regional inequality run deep at a time when an enthusiastic government, fresh from a round of election victories, is pushing ahead with a levelling-up agenda.

But we should not be too gloomy. After a battering in the 1980s for its engineering industry, Birmingham remodelled itself as a services centre around the pioneering National Exhibition Centre and it has a new financial hub that includes HSBC’s UK headquarters and a Deutsche Bank outpost. They’re soon to be joined by Goldman Sachs, as the US bank announced last month.

So if Boris Johnson is serious about closing the gap between the rich south and the economic laggards, investors should also be serious about looking for opportunities. Because if levelling-up works, it should generate good investment prospects, including for private investors.

The government is pledging money for everything from freeports to skills training, broadband networks and railways. Government jobs are moving north, with the Treasury setting up shop on Teesside.

Johnson’s efforts are likely to be boosted by digitalisation, which allows people to work together wherever they are located, and by signs that working from home will survive the end of lockdown. London’s grip on high-skill services will weaken, if the workers can live where they like.

But it won’t be easy. The Institute for Fiscal Studies has pointedly reported that “the UK is one of the most geographically unequal countries in the developed world”. Brexit could make things worse, as it’s more likely to hit low-skilled jobs outside the capital than London’s high-skill core. And, in a painful irony, the government has pulled out of Europe’s biggest levelling up initiative, the EU’s Regional Development Fund.

For private investors, picking investment plays in these circumstances is tricky, especially as the UK stock market has had a good run in the past year. The domestically focused FTSE 250 index is up 63 per cent since the pandemic shock, far ahead of the globally oriented FTSE 100 on 34 per cent.

Consolidation and globalisation have turned many local companies into bigger players. Among the largest listed companies in Manchester, for example, are PZ Cussons, the toiletries group, Timpson, the shoe repair chain, and Manchester United. Their markets are respectively global, national and global. Smaller companies too often have a national reach. Gately, a Birmingham-based LSE-listed law firm, is a diversified national group.

Of course, you can still get exposure to levelling up through national companies. Alex Wright, a Fidelity International UK-focused fund manager, recommends housebuilders with portfolios skewed away from the Southeast, such as Redrow and Vistry Group. He sees value in brickmakers Ibstock and Forterra, and in Brickability, a distributor.

Laith Khalaf of AJ Bell favours big construction groups such as Balfour Beatty. Less obvious picks are WHSmith and baker Greggs, on the grounds that their hub-based stores can profit from investment in transport networks.

Dig around and you can unearth some truly local investable companies. There is Daniel Thwaites, a Lancashire brewer with 250 tenanted pubs, listed on the small AQSE market. Sigma Capital Group, an LSE-listed housing developer, has a strong business in the Northwest. Durham-based Hargreaves, Britain’s biggest bulk haulier, is a substantial property developer in the North and Scotland.

However, it’s fair to say that the choice of pure-play North- or Midlands-focused listed companies is limited. For funds it’s worse. The Investment Association, which represents more than 4,000 funds, tells me it can’t name any fund with a clear northern identity.

Fortunately, property offers some ways in. Investors ready to lock up money away can look at buy-to-let. As my colleague James Pickford has reported, southern landlords are now looking with a fresh eye at residential property in the Midlands and the North. 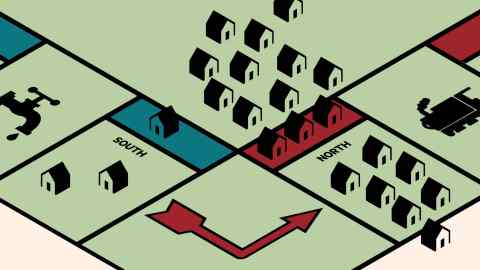 But bricks and mortar requires more money and time than the average investor possesses. Meanwhile, investing in out-of-London property through the financial markets is hard — there are few residential specialists, while commercial operators are overweight in unfashionable big offices and heavily biased towards the capital.

However, there are options. Fidelity’s Wright likes L&G, an institutional investor, with promising property projects, for example a £4bn partnership with Oxford university for housing and other schemes.

The investment trust sector offers 20 property funds with a regional focus, according to the Association of Investment Companies. They include the Urban Logistics Reit, a warehouse specialist, which does 66 per cent of its business in the Midlands, and the PRS Reit, which offers new-build rented family homes, has 59 per cent of revenues in the north west.

The choice could widen if Rishi Sunak, the chancellor, succeeds with his proposals for long term asset funds (LTAFs), open-ended vehicles which would allow investors to put money into, for example, infrastructure or venture capital.

The government wants LTAFs to be made suitable for at least some private investors — probably wealthier people with advisers. But it will be slow going: officials know funds holding illiquid assets such as bridges or venture capital stakes can be risky. So the rules, due to be announced later this year, will be cautiously framed. And rightly so.

In the meantime, for investors keen on the potential of unlisted companies, the investment trust sector already offers some closed-end funds with a regional focus, The Lancashire-based Seneca Growth Capital VCT, for example, boasts of “a strong pipeline of investment opportunities, particularly in the north of England.”

The British Smaller Companies VCT has investments in Manchester, Preston and Nottingham. And it’s run by a firm called YFM, formerly known as Yorkshire Fund Managers. What more would you want?

So if you want to want to back the North and the Midlands you should hunt around and use your imagination. The NEC story suggests it can be worth the effort. When Birmingham first funded it there was widespread scepticism about a bunch of provincial municipal councillors going into the global exhibitions business. Their boldness paid off.