From Picasso to Beeple: artists as pioneers

To be considered a pioneer, as an artist, used to spell trouble. Turner and Monet were mocked and derided before they were first accepted, then lionised: many other groundbreaking artists spent their lives as outsiders, and did not even live to see their own success. Van Gogh is the most obvious example, but there are countless earlier cases, especially among women artists across the ages.

Each time an artist has been considered dangerously, unacceptably, even offensively original or daring, it’s always been for the same reason: they are pushing boundaries — of form, material or taste — beyond what the reigning aesthetic is ready for. Time has usually sorted it out, in the case of true and fine talents. But being a pioneer in one’s own era has never been an automatic guarantee of quality or durable interest, and time also deals firmly with the outlandish but untalented, steering them neatly towards history’s dustbin.

But things have changed for pioneering artists. Time’s sorting office is no longer part of the process: in our nano-second age, speed and boldness are much more quickly rewarded. The current craze for crypto art and NFTs makes the point: pioneers, however incomprehensible to most of us, are lauded simply for being as far out there as they can possibly be. Last week’s $69.3m sale of a crypto work by the artist known as Beeple, paid for in a cryptocurrency called Ether (42,329.453 of them, to be exact), acquired by a purchaser whose nom de marché is MetaKovan, is the case in point.

Not one of those elements — the names, the sum of “money” or the method of paying it, even the work itself — makes any sense at all in a conventional art world. But it makes perfect sense in the digitised world, where this only seems a logical extension of the new norms. What’s surely exciting to everyone, though, is the convention-smashing spirit of every aspect of the deal, from blitzing notions of identity and authorship to transgressing ideas of currency and value. Not to mention the status of the actual “art”.

It’s in such a climate that Art Basel launches its latest online viewing rooms, OVR: Pioneers. The pioneering artists and makers featured in the 100 galleries might now look less radical than Beeple, but they were leading lights of their own eras and of movements — Arte Povera, Korean modernism, the Paris avant-garde, Mono-ha and more. And for most, time has done its work, and shown us their abiding value.

Artists who have taken a radical approach to social commentary and activism are many, and include photographers — the amazing Gordon Parks, at Alison Jacques Gallery — and multimedia practitioners such as Brazilian nomad Paulo Nazareth, who lists immigration, racialisation, globalisation and colonialism among his targets. Creators have pushed the boundaries in materials, too: from rice paper to fire hoses, the washboards and pancake labels of 94-year-old Betye Saar, using found materials of every kind, or taking traditional media to new extremes.

And, of course, “new” media and technology. Some of this new media is no longer so new: from the 1980s until his death last year, American sculptor Alan Rath created kinetic sculptures guided by software of his own making — robotics and computer-generated animations of body parts that explore the relation between human and technology. In multimedia works, Tony Oursler reaches back beyond even his early video experiments of the 1970s to evoke historic pre-tech trickery — magic lanterns, camera obscura — and combines this heritage of “hallucinogenic dramaturgy” with the latest digitally assisted imagery. Even 3D printing, in the hands of Frank Stella, harks back almost 30 years.

Other artists use surveillance, AI, facial recognition technology and more. Then there’s the newer new, where simulation software and gaming technology informs the work of Chinese internet artist Miao Ying. Her “Pilgrimage into Walden XII — The Honor of Shepherds” creates six guardian shepherds overseeing a medieval fantasy land: ancient concepts of morality and narrative encased in the latest tech.

Very few artists have been true pioneers, in that they rarely actually invent or discover anything

“Pioneers” is a thought-provoking theme. Scanning the gallery list of OVR: Pioneers is something of a 20th-century art-historical education, and certainly makes us think about what true originality actually consists of. All developments in culture are accrued, gathering and snowballing influences from every corner of human life, but they are punctuated by sudden breakthroughs. Looking back a century to 1921, the spotlight was on the likes of Klee, Ernst, Léger, Dora Carrington, and some of that work still looks bandbox fresh today, while the previous couple of decades had seen advances of amazing speed from great pioneers: Picasso’s “Les Demoiselles d’Avignon” of 1907, Duchamp’s “Fountain” of 1917 among the most famous. And technology was having a powerful impact on the visual arts already then: would there have been “Demoiselles” without the camera and early silent film, whose flickering frames translated so directly into a Cubist vision?

Very few artists have been true pioneers, in that they rarely actually invent or discover anything. Their originality occupies a different terrain: the exceptional capacity to assimilate, mirror, redefine and represent not only our deeper feelings but also the whole temperature and tempo of the wider culture in which they live. From that astonishing alchemy, their voices ring fresh and clear — and lasting. For a brilliant reflection of the many mood-swings of the modern period, these 100 galleries present a fascinating study.


Get alerts on Collecting when a new story is published 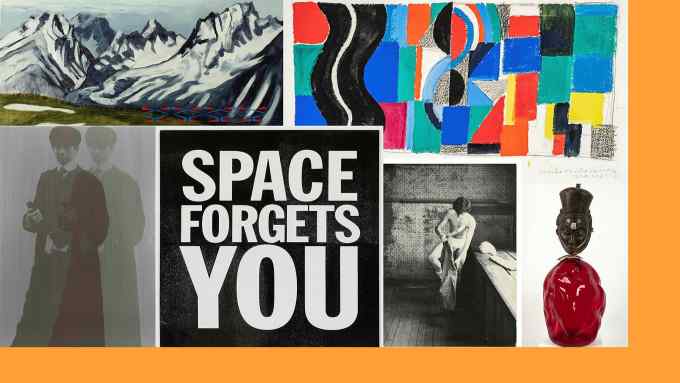