François Fillon has urged Angela Merkel to soften her position towards Russia and harden her policies on migration, as France’s presidential frontrunner flew to Berlin for the first time since his victory in French centre-right primaries.

Speaking on Monday after meeting the German chancellor, Mr Fillon insisted on the need to restore better relations with Russian president Vladimir Putin, saying it would help to eradicate the Islamist terror threat to France and Germany rooted in war-torn Syria.

Mr Fillon said he opposed Brussels’ plan to spread refugees from the Middle East and Africa across the EU to share the burden of an unprecedented migration to Europe.

He also implicitly criticised Ms Merkel’s choice to engage Turkey in EU membership talks in exchange for Ankara’s commitment to keeping migrants on its soil.

“We have differences on the question of refugees and the economy? Let’s face up to them the better to overcome them,” Mr Fillon told German MPs and journalists at the Konrad Adenauer foundation, a conservative think-tank. “France cannot accept more refugees. The right to asylum does not equate to migratory disorder.”

The 62-year-old’s win in November’s primary election for France’s centre-right parties has made him the most likely successor to President François Hollande. Polls indicate that Mr Fillon is likely to beat Marine Le Pen of the National Front, whose victory would spell political upheaval for the EU and upset decades of strong Franco-German ties.

We have differences on the question of refugees and the economy? Let’s face up to them the better to overcome them

While Mr Fillon campaigned against the introduction of the single currency in 1992, he says he is a pragmatic EU supporter who intends to stay committed to the Franco-German relationship because no pan-European initiative could be enforced otherwise.

However, his stance with Russia could prefigure a change of tack with a faster easing of economic sanctions established after Moscow’s annexation of Crimea from Ukraine.

“Fillon may be a conservative like Angela Merkel, but his views on migration and Russia are a source of concerns for Berlin,” said Henrik Enderlein, director at the pro-EU Jacques Delors Institute. 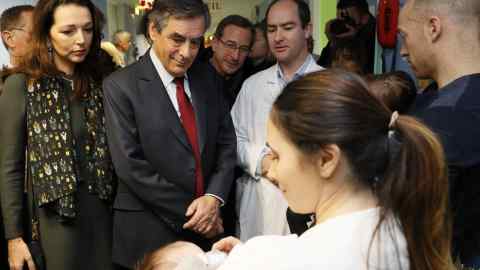 Russia should “be a major partner”, Mr Fillon said in Berlin. “We need to get out of this deadlock that we put ourselves in and which does not benefit anyone,” he said.

Mr Fillon’s stance strikes a chord with some German politicians, mainly on the left, who have long argued for an easing of sanctions.

They include Frank-Walter Steinmeier, the social democrat foreign minister, who last year won support from his party but was criticised by Ms Merkel’s conservatives when he advocated a gradual lifting of sanctions in return for Russia’s implementing its part of the Minsk Agreement to halt conflict in Ukraine.

Mr Fillon’s fear that US president Donald Trump and Mr Putin could strike a deal above the heads of European leaders is also shared in Berlin.

Fillon may be a conservative like Angela Merkel, but his views on migration and Russia are a source of concerns for Berlin

However, Ms Merkel — who on Friday is due to meet Mr Hollande, with whom she has worked closely on the Minsk agreement — did not yet seem willing to shift ground on the issue.

Steffen Seibert, the chancellor’s spokesman, on Monday said that while Germany had “an interest in good relations with Russia”, there were “problems” over Ukraine, including the implementation of the Minsk accord, that had to be worked on.

Mr Fillon has also said he wants to strengthen the eurozone to give it a stronger hand in relations with the US and China. He also supports deeper defence co-operation and agrees on adopting a tough and united front in the bloc’s Brexit negotiations with the UK.

Get alerts on François Fillon when a new story is published