Gene Beery — why the cult American artist’s time has come

Championed by Max Ernst and Sol LeWitt in 1960s, the 82-year-old’s first ever museum show opens in Switzerland

In 1961, the Surrealist artist Max Ernst slipped a note and a $100 cheque to an unknown, Wisconsin-born artist who had a work in a group show at New York’s Museum of Modern Art. “Continue your work!” Ernst wrote. The artist was Gene Beery, then in his mid-20s, who looked set for success. Just four years later he left town. In his determination to escape the trappings of an art world that otherwise hadn’t show much appreciation, Beery left most of his work behind too, including text paintings on the hardboard Masonite he’d picked up from Lower East Side construction workers. Another artist came to his rescue: his friend and neighbour Sol LeWitt, who gathered up the abandoned works (paying for them at a later date).

These, and other works that LeWitt later bought, remain in the LeWitt estate collection. They are now among the pieces in Gene Beery’s first institutional retrospective, currently at Fri Art, a former cardboard box factory that is now a kunsthalle in the Swiss countryside city of Fribourg.

On a train from the event-packed Art Basel fair to the more modest, French-speaking Fribourg, I ask the show’s Swiss curator, Balthazar Lovay, why it has taken so long for such an exhibition to happen. “Beery withdrew himself from the art world: that sends a strong message,” he says. “His work is also not easy to ‘catch’. It can be satirical, poking fun at the professionals he needed to impress, but is also a super deep interrogation into what art is and what artists do.”

Beery’s naive style, social criticism and often-surreal narrative humour — which to my mind delight — were out of step with their time. Vernacular art that made people smile (or wince) was not the order of the day. In 1960s, Clement Greenberg’s influential art criticism supported the high-minded and heroic rigours of Abstract Expressionism. One of the earliest works in the Fribourg show (salvaged by LeWitt) is a Masonite oil with the words “This Is My Last Serious Painting” (1960). The text is accompanied by Beery’s signature and smeared with expressionist drips and gestural brushstrokes. His distaste for Abstract Expressionism is clear

But Beery took Ernst’s advice and kept painting once he moved first to the outskirts of San Francisco, and eventually to the remote gold rush town of Sutter Creek, in the Sierra foothills, where the 82-year-old artist still lives and works. He did take a pause — between 1976 and 1997 — when his focus was to bring in money for a growing family. Painting took a back seat as Beery took on gardening jobs, though he did produce about 30 self-published books during this period, some of which are included in a vitrine in the Fri Art show.

Before this, California’s sunshine and hippy vibe injected colour and imagery into Beery’s work. Bubble-writing and a children’s book style characterise pieces made between 1965 and 1970, when the artist also worked as a taxi driver. These works include a touching painting called “I Love You” (1965), in which sound waves between a man’s mouth and a woman’s ear become visible and which was made for his adored wife Florence who died in 2015. Lovay isn’t comfortable when I suggest that, visually, this was something of a Pop phase in Beery’s life. “Pop was more about mass production and consumerism, and had a certain detachment, Beery’s topics don’t fit that mould.” He concedes, though, that “Special Event” (1969), a work that brightly builds up the form of words in a birthday card, could be seen as “a sort of vernacular Pop”.

Pop or not, these works seem the most commercial (not that Beery has had much of a market to date). But the artist seems more at home with his distinctive text paintings, now a dominant part of his output. “Some words are worth a thousand pictures,” Beery says in an interview reproduced in the show’s catalogue.

It seems the right moment for this work. What may have been out of time in 1960s America looks increasingly relevant today. Beery’s recent “Life Stars” (2016), which assigns a 3.5/5 star-rating to “life”, poignantly sums up how much of our critical thinking is now reduced to the likes of an online restaurant review.

When I look at his earlier works — with phrases such as “As Long As There Are Walls There Will Be Paintings!” (1986) and “This painting will always be interesting” (in his 1972 “Experiment in Time”) — I can’t help thinking about pieces on offer just 90 minutes away at Art Basel. The surreal, self-referential French artist Laure Prouvost, born in 1978 and currently representing her country at the Venice Biennale, comes most to mind. Her works such as “This sign is illegally here” (2018) and “Ideally here the floor would be covered of squashed strawberries” (2016) are selling like hot cakes (€10,000 each) through Lisson Gallery. It’s telling that Beery, now 82, has begun to work with Cologne’s Jan Kaps gallery, which otherwise represents much younger artists.

Fri Art’s retrospective is relatively small, with 40 paintings overall, but this seems the right way to introduce an artist that currently has a cult following at best. Works are arranged mostly chronologically through four rooms and a corridor, though there a few interruptions to the timeline that seem appropriate to Beery’s resistance of structure and labels. The last room, in which 19 mostly text paintings are hung haphazardly and at angles, feels particularly personal. “This is what his home looks like,” Lovay says, but admits it was a difficult hang for an overthinking curator to achieve. “I asked Gene where exactly he wanted the works and he told me just to put nails randomly into the wall and then add the paintings.” This, and the show as a whole, works a treat. 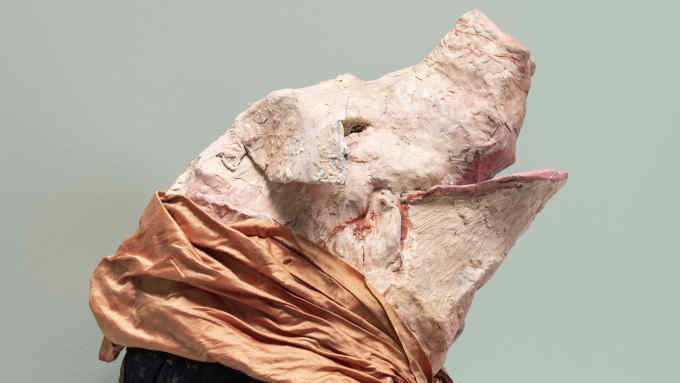