Increasing demand is driving the need for efficiency gains, but machines cannot do it all

It may be the 21st century, but an aircraft final assembly line still has many hallmarks of a cottage industry. Workers use hand-tools to connect assemblies and fit wiring and components in a process that seems to have changed little since the 1940s.

But soaring demand for aircraft and production volumes are beginning to offer opportunities for efficiency gains through automation that have eluded much of the aerospace industry for half a century.

Robots are making their debut at both Airbus and Boeing and at their suppliers. By the end of May, Airbus had secured 4,568 orders for its upgraded A320neo family of short-haul airliners. Strong demand underpins plans to raise output from 40 a month in 2016 to 60 a month by 2019. And after building just nine big A350 twin-jets in the first half of this year, the European company’s Toulouse plant aims to turn out 10 a month by the end of 2018.

It is a similar story at Boeing, where bulging order books are driving adoption of robots to help assemble the 737 Max short-haul plane and its impending big sister, the 777X.

In the supply chain, Pratt & Whitney (P&W) has developed a new kind of jet engine, a geared turbofan, which will power many of the single-aisle aircraft and their rivals from Canada, Russia, Brazil and Japan.

Greg Gernhardt, president of commercial engines programmes at P&W, expects annual output of this engine to multiply sixfold to 1,200 motors by 2020. That will probably be the highest production rate since P&W was turning out its Wasp piston engine in the second world war, he says.

The airframes of the latest airliners, notably the B787 and A350, make extensive use of composite materials, prized for their strength and lightness. Manufacturers such as GKN Aerospace make extensive use of robots to produce these in sufficient volumes and to the required accuracy and consistency.

At the company’s Bristol plant in the UK, automated fibre placement machines lay the carbon fibres of the 27 metre rear wing spar. Automated guided vehicles carry wing structures through dedicated work stations for machining and drilling by robots. On other assemblies, the company has also introduced robots for tasks such as welding and installing fasteners. 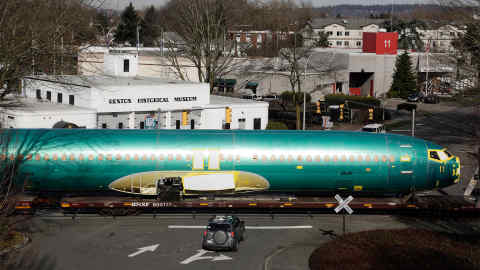 Chris Gear, chief technology officer at GKN Aerospace, says the use of robotics is becoming more prevalent “to meet demands for increased rates of production along with even finer manufacturing tolerances and higher levels of consistency”.

As aircraft production rises, investments that make sense for suppliers increasingly make sense for aircraft makers too. Kuka Robotics, in Augsburg, Germany, has been developing some of its robots for aerospace applications for more than a decade. Its platforms are used to position aerostructures and tools. Its robots work on drilling, riveting, polishing, welding and fuselage assembly.

At Boeing they are used to drill and rivet fuselage sections together, reducing the need for workers to undertake tedious repetitive tasks that can cause injuries. The US aerospace group has installed an automated robotic production line from Kuka at its Everett plant in Washington state to assemble fuselage sections of its 777 twin-aisle aeroplane.

The robots work concurrently, one inside the fuselage and one outside, to drill and countersink holes, insert the tens of thousands of fasteners, and complete the riveting. Other robots are used for spray painting.

Wolfgang Meisen, a spokesman at Kuka, says that automation is not necessarily driven by costs. Rather, robots can undertake harmful, strenuous or dangerous jobs that require high precision. That frees humans “to focus on tasks the human is much better at due to his or her extreme flexibility, cognitive abilities, adaptability and ability to make decisions”.

The development of the internet of things is expected to accelerate the use of robots as machines communicate more with each other, and become more mobile. Airbus is working with researchers in France and Japan to develop collaborative robots, or cobots, to work alongside assembly staff. A French supplier, Daher, has been experimenting with the use of exoskeletons to augment the muscles of employees engaged in physically demanding tasks.

Another more radical idea is to “3D print” aircraft assemblies and components where they are needed, using a cluster of robots to build awkward shapes or one-off items.

Some fear staff may lose their jobs, but Mr Meisen notes: “If you look at the three countries with the highest density of robots — Japan, Germany and South Korea — those three also rank among the countries with the lowest unemployment rates worldwide. The rise in robotics goes along with innovation, productivity and economic success.”

GKN’s Mr Gear says that “use of robots is creating new types of jobs focused on their effective maintenance, which is vital to consistent and sustained production levels”.

Robots, it seems, can be almost as challenging to manage as their human counterparts. And that makes companies think before swapping an expensive robot for a flexible human. “Where maintenance, repair and overhaul of state of the art robotic technology is not practicable, robotics may not be an effective solution,” says Mr Gear.