How to future-proof company culture

Top businesses confront disruption by changing the way they work

If an organisation gets its culture wrong, none of its other plans matter.

“Our ability to change our culture is the leading indicator of our future success,” Microsoft’s chief executive Satya Nadella told its annual shareholder meeting in 2015.

The technology company had started to overhaul its organisational culture in early 2014 after Mr Nadella became the third person to take on the top job at Microsoft, following founder Bill Gates and Steve Ballmer. Once all-conquering but then beset by bureaucracy and internal politics, it had lost ground to rivals such as Apple and Google. Mr Nadella promptly set about changing both corporate culture — as outlined in his book Hit Refresh — and strategy. Since then, the company’s stock price has increased fivefold and last year it topped $1tn in market capitalisation.

With continuous disruption as the new normal for business, companies must constantly develop their strategies, business models and market position. Significant change to any of these will require a corresponding evolution in corporate culture (“the way human beings behave together — what they value and what they celebrate,” as management guru Roger Steare defines it).

Proportion of organisations employing more than 1,000 people that rated their efforts at culture change as ‘highly’ or ‘very highly’ successful’ in a 2019 survey

Microsoft is one of more than 6,000 organisations that my research company, the Institute for Corporate Productivity (i4cp), surveyed for its 2019 study on culture change, a subject it looks at regularly. Two-thirds of study participants said that their organisations had recently or were currently going through some form of culture change, but only 15 per cent of those employing at least 1,000 people rated their efforts as either “highly” or “very highly” successful.

It turns out that the 15 per cent had undertaken a number of specific actions. Moreover, those actions correlated not only with their ability to change culture but also to achieve superior growth over the past five years, whether in revenues, customer satisfaction, market share and profitability.

Drawing on this research, we can draw up some guidelines — based mainly on the 15 per cent — for developing a future-ready corporate culture.

What you should do

1. Renovation, not transformation. More than half of the organisations that were “highly successful” in changing the culture had set out to preserve the best of the company’s legacy. Existing norms, fundamental values and the history of the organisation were woven into the new culture.

Such an approach is important to companies with long and celebrated histories, such as 3M, the industrial conglomerate.

Under chief executive Mike Roman, who stepped up to the role in 2018, 3M — famous for innovations such as Post-it notes — started the process by defining when the business was at its best and which elements were core to its future success. The senior managers knew that continued innovation was fundamental, but they had to determine what was unique to 3M. They began thinking in terms of “strengths and stretches” — exploring the company’s strengths and how they aligned with 3M’s strategies. They then asked: “where do we need to stretch?”

2. Listen to employees. Senior leaders often assume they know what the culture represents. Too often, they are wrong. Two-thirds of the successful organisations began by gathering data from the workforce and other stakeholders on how they viewed the existing culture and what they wanted the new one to be. By consulting employees and paying attention to general sentiment, leaders can also track and measure whether the new culture is taking root.

3. Explain what is changing and why — from the top. The chief executive must articulate the company’s purpose and mission, why changing the culture is vital and what it seeks to change. In 86 per cent of the successful organisations, the chief executive met the senior leadership team first to make clear the behavioural changes that would be required.

4. Find the influencers and energisers, and sign them up. These people may come from across the business. More than half the successful organisations had used network analysis techniques to identify influential employees in order to enlist them for both their perspective and as champions of cultural change. Studying conduits of communication can reveal “energisers” — and “blockers” — throughout an organisation’s informal network.

5. Plan how progress will be measured, monitored and reported. Every day at Microsoft, groups of employees are briefly surveyed (for instance, via a single pop-up question on their computers) to help measure their sentiment. The initiative started by asking employees if they were aware of the “growth mindset” Mr Nadella sought to build. They were later asked whether leaders exhibited this mindset.

By contrast, this important step had been neglected by 90 per cent of the organisations whose efforts to overhaul corporate culture failed.

What not to do

1. Don’t delegate ownership of cultural change. The chief executive must be the culture champion. In nearly 80 per cent of the successful organisations, the chief executive was the lead architect of the change. Whether in investor calls, company town hall meetings, customer meetings, visits to production facilities or media interviews, they used every possibility to discuss the importance of changing the company culture.

It is increasingly common for organisations to appoint a culture tsar or a culture committee, but what really makes the difference is the chief executive committing time and resources to take the lead.

2. Don’t put up with leaders who resist. Their ability and willingness at all levels to embody the change is non-negotiable. It may be necessary to move naysayers and blockers out of the way — even if they are top performers. Microsoft did this very effectively at the start of their culture renovation.

3. Don’t underestimate soft power. Organisational elements, such as culture, and leadership traits including empathy, deep listening and vulnerability, which are traditionally considered as “soft,” are increasingly viewed as “hard” by senior management and stakeholders. They are “hard” in terms of business impact and in the ability to measure them, through indicators such as employee retention, employee referrals and customer advocacy scores.

These elements and attributes are essential to building and sustaining an agile, healthy organisational culture: soft is the new hard. 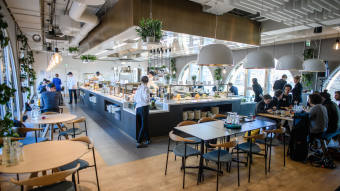