Sebastian Werner’s family farm has had a weekly stall selling its apples, berries and honey beside the 1,000-year-old cathedral in the German town of Mainz since the 1970s — but in the past few years he has noticed a worrying shift.

“I know almost all our customers here and some of the older ones stopped buying our produce after they retired, saying they can no longer afford it,” he said. “Prices keep going up — rents, petrol and electricity — so they have less money to spend.”

Heidi Sohn, a butcher from just across the Rhine in Wiesbaden, agreed with him. “Prices are a bit too high — rents are definitely too much,” she said, adding that to afford somewhere to live she needed to move out of the city.

Ask anyone at the European Central Bank’s headquarters 20 miles away in Frankfurt about inflation and they are likely to express frustration at its persistently low level. Yet at the Mainz farmers’ market, many people think the opposite.

Prices shot up in shops and restaurants when the euro replaced the Deutsche Mark in 2002, said Ludwig Kloster, a baker from the nearby town of Bad Kreuznach, adding: “The cost of living is still going up.” He aims to retire to Latin America, where “things cost half as much”.

In recent years eurozone consumers have consistently believed inflation in the bloc to be much higher than it actually is. Households thought annual inflation averaged close to 9 per cent between 2004 and 2015, according to a European Commission survey.

In fact, inflation has averaged 1.7 per cent a year since the euro launched in1999 according to the ECB — in line with the central bank’s core target of below but close to 2 per cent — and never exceeded 4.4 per cent.

This matters because the ECB’s main objective is to maintain price stability; when prices rise too fast, or grow too slowly, it needs to act.

That mandate dogged Mario Draghi’s term as ECB president; in the eight years until he handed over to Christine Lagarde in November, inflation averaged just 1.3 per cent.

The central bank expanded its range of policy tools in a bid to boost prices, including cutting interest rates to a record low of minus 0.5 per cent and buying more than €2.6tn of bonds. Yet in December inflation was still only 1.3 per cent — slightly up on last year’s lows, but not by much.

The mismatch between people’s perception of prices and the reality will be on Ms Lagarde’s mind on Thursday when she outlines the framework for the ECB’s first review of monetary policy strategy in 16 years.

If the public believe prices are rising faster than they are, they will struggle to understand why the ECB is keeping rates in negative territory.

Ms Lagarde has pledged to make “bringing the ECB closer to the people” one of her priorities.

“We need to engage with our fellow citizens and enter into dialogue with them,” she said in a recent interview.

To do this, the ECB may be tempted to mimic the US Federal Reserve’s recent series of “Fed Listens” events in which it met business and community leaders. It could also make greater use of household inflation expectation surveys to shape its policymaking.

Another option is to change the inflation calculation, putting more emphasis on housing costs, which currently have a much lower weighting than the share of income most people spend on rent or mortgages. Some economists say this helps to explain why many people perceive inflation to be higher than it is.

The biggest debate is likely to be whether the ECB should change its target. Some policymakers say its current objective needs simplifying — a view already echoed by Ms Lagarde.

The ECB could switch to a straightforward 2 per cent target, bringing it into line with the US Fed and the Bank of England.

But others say it should be more flexible. François Villeroy de Galhau, governor of the Banque de France and member of the ECB’s governing council, said in a recent speech: “We cannot guarantee 2 per cent, either all the time or straight away.” 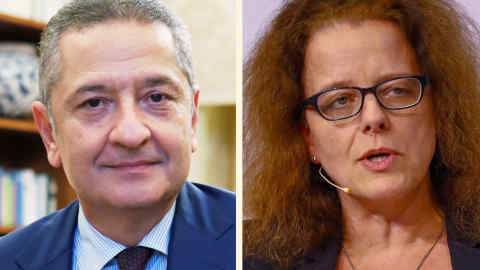 Mr Villeroy said the inflation target should be symmetrical — indicating the ECB would be as worried about inflation being too low as being too high. Mr Draghi embraced this principle shortly before he left, but it was never formally approved by the governing council.

Other policymakers argue the ECB should target a band instead of a single figure. Proponents include Klaas Knot, the Dutch central bank boss, and Benoît Cœuré, an ECB executive board member until last month.

The idea is gaining momentum inside Germany’s central bank. While Bundesbank boss Jens Weidmann has said he sees no reason to change the inflation target, there is growing support among his officials for a band of 1.5 to 2 per cent. This would be a de facto reduction of the ECB’s objective and could bring forward the timing of the next rate rise.

Opponents argue this would mean accepting lower inflation and leave the ECB with less room to cut rates in the next downturn.

“The arguments used to defend [the idea] that a quantitative tolerance band would not lead to inaction when inflation would be in the lower part of the range don’t seem convincing to me, in view of my experience and knowledge about central banking and central bankers,” said Vitor Constâncio, former vice-president of the ECB.

Having missed its current inflation target for many years and struggled to explain why, a lot is riding on the ECB’s strategic review. Given the confusion about prices among eurozone citizens — including those at the farmers market in Mainz — the central bank may now have a hard time convincing people to have more confidence in any new objective.

Shoppers may know more about inflation after all / From J Wilson Carswell, Rickmansworth, Herts, UK