Michigan: a tale of US neglect

From roads to railways to water supply, one state’s decaying infrastructure reflects the scale of Biden’s task to rebuild

Many US roads, bridges and water supply systems were built in the first half of the 20th century; today they are outdated and in need of replacement. President Biden has made clear that fixing America’s infrastructure is his next priority, now that a $1.9tn stimulus bill — known as the American Rescue Plan — has made it through Congress.

Michigan, a state of the American Midwest known as the Great Lakes State and home to nearly 10m people, will hope he can deliver. It was the centre of the world’s automotive industry in the 20th century. But, now, much of the state infrastructure built to support that industry is near to collapse. One state’s neglect is emblematic of the scale of the post-pandemic rebuilding task that lies ahead.

Michigan’s Mackinac Bridge — “The Mighty Mac” — was the longest suspension bridge in the world when it opened in 1957 and it remains the longest in the western hemisphere, with 7,400ft of road suspended in the air over the Straits of Mackinac, the point where two of the Great Lakes, Michigan and Huron, meet.

The bridge remains one of Michigan's top tourist attractions and its distinctive outline features on many state motor vehicle licence plates.

But Michigan’s finances have been hard hit since the 2009 recession, leaving little state funding to repair old and sometimes crumbling bridges. The harsh winters of the Midwest have taken their toll, leaving many in disrepair and some at risk of failure.

The Michigan Department of Transportation says two-thirds of state-owned bridges are in only fair condition; another 7 per cent in poor condition and only about a quarter in good condition. The Larned St bridge in Detroit captures the dilapidated condition of many Michigan overpasses.

The growth of the interstate highway system in the 1950s helped shape the US industrial landscape, especially in the Midwest. Facilitated by freeways, factory workers left inner cities in droves, leaving behind often impoverished urban ghettos.

Michigan was home to some of the earliest highways, including the section of Interstate 94 which still runs through Detroit, and is part of one of the oldest urban interstate highways in the US. It likes to be known as the state that put the world on wheels, because it is the home of Henry Ford’s car company. But today its roads are in such disrepair that Democratic governor Gretchen Whitmer was able to win an election in 2018 by running on the slogan, “fix the damned roads!”

Repairs have begun on some of the worst sections of Interstate 94 near Detroit, but many of Michigan's roads remain in appalling condition. Governor Whitmer recently told a US Senate hearing that 40 per cent of the state’s major roads are in poor or mediocre condition, and poor road conditions are costing each Michigan motorist more than $600 per year.

Michigan is known for its freshwater rivers and lakes, including the Muskegon River in the west of the state which was dammed in 1907 to provide electric power for the region. The Croton dam is one of the oldest in the state. When built early in the last century, it represented some of the latest advances in electric power generation.

But Michigan was the scene of two spectacular dam failures in the midst of the coronavirus virus pandemic last year, when the Edenville and Sanford dams collapsed sending thousands of people fleeing their homes.

The fate of the two dams highlights the poor condition of much US dam infrastructure, which citizens rely on to protect their homes from rising water levels.

According to a report published last week by the American Society of Civil Engineers, the average age of America’s dams is 57 years and the number of “deficient high-hazard-potential dams” exceeds 2,300.

Detroit’s 18-storey beaux arts Michigan Central Station has been derelict for decades, a symbol of the long decline of the US passenger rail network. It loomed over this once-mighty city as a symbol of how far it had fallen, a must-see attraction for “ruin-porn” tourists, who came to gawk at the boarded up, rat-infested building where drug dealers plied their trade.

Now, the gutted, graffiti-marked station — which opened in 1913 and has been closed since 1988 — is to be resurrected, not as a railway station but as a campus for Ford motor company’s electric and driverless vehicles.

The Midwest’s two largest cities, Detroit and Chicago, are served by only two or three direct passenger trains per day and the condition of the rails is so poor that passengers complain it is difficult to type on a laptop or drink a cup of coffee when travelling. Delays are also common.

The decline of passenger rail traffic has meant that Detroit’s main passenger rail terminus is now a small, one-story building with no concessions and only a single waiting room.

Detroit was once a bustling metropolis and one of the richest cities in America, served in the 1860s by a network of horse-drawn streetcars.

By the turn of the 20th century, electrified streetcars had replaced the horses, and in 1922 Detroit became the first US city to establish its own municipally-owned transit system.

Streetcars remained popular until the 1940s, with crowds thronging the stations along the premier shopping street Woodward Avenue. But public transit in Detroit fell steadily into decline after many residents moved out of the city following the 1967 race riots. City workers preferred to commute from the suburbs by car.

City bus services remain infrequent and unreliable compared with other big cities around the world, despite efforts by the Detroit government in recent years to upgrade buses and terminals.

In 2017, Detroit opened a new streetcar service on Woodward Avenue, called the Q line, but it is mostly used by tourists.

Michigan’s Greenfield Village museum outside Detroit is the current home to the Menlo Park laboratory of Thomas Edison, inventor of the electric lightbulb.

Michigan’s electric power infrastructure has long been susceptible to outages due to severe weather, however, with blackouts often leaving residents without power for hours and sometimes for days.

In 2014, much of downtown Detroit was plunged into darkness, traffic lights were knocked out and elevators stopped working after a widespread failure in the city’s power grid.

Still, Michigan’s problems have paled in comparison to the recent power woes of California, which had to implement rolling blackouts to meet electricity demand, and Texas, where blackouts last month left millions of people without electricity or heat for days.

Detroit’s auto industry sustained a body blow during the 2009 recession, when the big carmakers closed production plants across Michigan and the Midwest — and many of the mom-and-pop industrial shops that serviced the factories were closed, or had to reinvent themselves.

Some that have supplied the auto industry for decades have managed to cling on, but as shadows of their former selves.

The industry is staking its future on new green energy vehicles. General Motors, which is based in Detroit, late last year pledged to invest $27bn in electric vehicles by 2025, up from $20bn it had said it would invest earlier last year.

Forty per cent of its offerings in the US market will be electric in five years, it says, and two-thirds of the 30 all-electric models it plans to make worldwide will be available in the US. Previously, it had planned for 20 such models.

Michigan has always seen itself as at the forefront of new energies worldwide. It popularised cheap, reliable cars powered by internal combustion engines in the early 20th century, at a time when most of the world was still relying on horsepower from actual horses.

Henry Ford, a Michigan native, did not invent the first automobile, as is sometimes erroneously suggested, but he did pioneer a new way of mass-producing vehicles via moving conveyor belt, which made them affordable to ordinary people. In 1913, he started using this system at his Highland Park Assembly Plant.

Michigan is nicknamed the “winter water wonderland” because it sits at the heart of the Great Lakes: Superior, Michigan, Huron, Erie and Ontario. Together, they form the largest freshwater system on Earths.

The Great Lakes cover more than 94,000 square miles and hold an estimated 6 quadrillion gallons of water — or about one-fifth of the world’s fresh surface water supply, according to the Great Lakes Commission.

But Michigan is also known for one of the worst municipal drinking-water scandals in US history. The Flint water crisis began in 2014 when the small city of Flint changed its water source, which led to drinking water becoming contaminated for years with lead and legionnaires disease.

The Flint crisis was a warning that many US municipal drinking-water systems are ageing and in need of significant investment. A report released last week by the American Society of Civil Engineers says there is a water-main break every two minutes somewhere in the US, and 6bn gallons of treated water are lost each day, enough to fill 9,000 swimming pools. 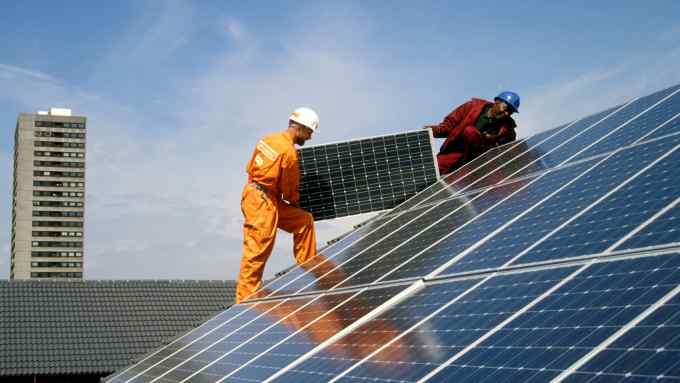