How the pandemic has reshaped adviser-client meetings

When a physician went to visit his financial adviser’s office earlier this month, a once banal meeting became a markedly different experience.

On arrival, the client had to declare whether he was ill or may have come into contact with anyone who had Covid-19. He was then directed to a conference room, which bore signage stating the maximum number of occupants allowed. Only once client and adviser were seated at a safe distance could they remove their masks and continue with business as usual.

“He said that we were doing everything right here, so that made me feel confident about the measures we’ve put in place,” recalls Paul West, managing partner at Carson Wealth.

Carson Group, which features on the FT’s Top 300 list of registered investment advisers (RIAs), is one of many such firms across the US rethinking protocols and office design in response to the pandemic.

Most of Carson’s offices have begun to welcome clients back, but some, including its San Francisco location, remains closed. “We’re looking to regulators on the state and county level,” Mr West says. “Each of our offices is different.”

Other FT 300 advisers report differences between their regional offices — in areas like local regulations and building layouts — leaving many firms unable to adopt a uniform approach to reopening their workplaces.

George Stapleton, chief executive at RegentAtlantic, plans regular electrostatic disinfection of its New Jersey office every two weeks. Phones and some chairs will be removed from each conference room, and there will be handwashing stations in the firm’s kitchens and client bar.

Disinfectant wipes will be placed at the front desk, near printers, “huddle rooms” and rooms for client meetings, Mr Stapleton adds. Arrow signs will also be placed on the floors to establish an office “traffic flow”.

But building design requires RegentAtlantic to take a different approach at its New York office. “We are being more cautious with our Manhattan office due to the complications related to mass transit and high-rise elevators,” Mr Stapleton says, adding that the firm is also being more selective about who can visit the building.

Use of desk space remains a hot topic of conversation among firms. Patrick Lafley, managing partner and co-founder at Constellation Wealth Advisors, says he is considering introducing “hotelling” — a set-up used by companies like EY, IBM and Alphabet whereby employees reserve a workstation for certain periods, rather than being assigned a desk.

But Mr Lafley adds: “These ideas hinge on a lot of factors which we cannot fully predict during Covid, so we don’t really have enough clarity to finalise any long-term plans.” For now, Constellation has divided its workforce in half, with each group alternating working in the office for two weeks at a time.

MJP Wealth Advisors is at about 20-25 per cent capacity at its offices in Connecticut, while only one adviser has been working from its Westport office since April, says Brian Vendig, president and managing executive of the firm. At its Fairfield location, two employees have been working at opposite sides of the office while most employees continue to work from home.

Mr Vendig says clients who preferred meetings in person have realised they can still have “solid relationships” with their adviser at a distance. “In a post-pandemic world, we might go back to face-to-face meetings where people are comfortable, but I just don’t get the sense that that’s where people are right now.”

Advisers’ gradual return to work is consistent with that of some other sectors. For instance, CoreNet Global, an association of corporate real estate professionals, surveyed 175 members in May and found that 94 per cent indicated that their workforce would return to the office “in waves”. And in another CoreNet survey the following month, nearly half said they would adjust office layouts while one-fifth plan to install new equipment or furniture.

An upcoming relocation by Indianapolis-based Evans May Wealth has allowed the firm to plan for “additional personal space and barriers for protection”. Elizabeth Evans, managing partner, says that when her team moves to a new office space later this year, Plexiglas will be installed “to protect employees that do not sit in enclosed offices”.

Antonio Argibay, managing principal at architecture company Meridian Design Associates, says clients want new layouts that will allow for less density. These include removing conference tables altogether and instead marking the floors with socially distanced spots for employees to gather in a circle, he says.

This, Mr Argibay believes, marks a significant shift in corporate thinking, especially for financial firms. “At one time there was a rush in the opposite direction,” he says. “‘How can I get the most . . . people in my workplace?’. The pendulum is swinging back in the other direction.” 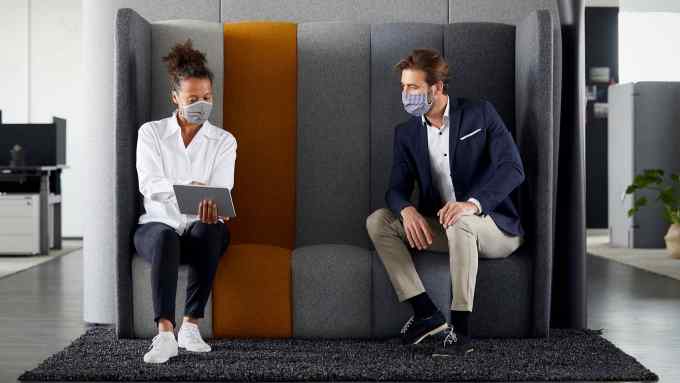