How To Spend It Interiors

Are you doing the deskscape right?

How the paperweight became a philosophical debate

On the desk of the German architect and Bauhaus founder Walter Gropius sits a solid-brass egg. Still housed in the study of his former home in Lincoln, Massachusetts – the modernist Gropius House – the substantial double desk is the work of Marcel Breuer, one of the Bauhaus’s first and most famous students. Here, Gropius and his wife Ise’s creative clutter continues to settle upon the surface: lamps by Marianne Brandt; pre-Columbian artefacts from their friends Diego Rivera and Frida Kahlo; and the small but shapely brass egg paperweight designed by Carl Auböck II in 1952.

“It’s very tactile,” says Nina Hertig, whose London shop Sigmar stocks the sinuous forms typical of Auböck II (who also studied at the Bauhaus under the Swiss mystic Johannes Itten). The objects, ranging from wall hooks to bookends, are still cast by hand in Vienna by his grandson Carl Auböck IV. The most popular is the egg (£170). “People just like to hold it. It’s a paperweight, but it’s also a philosophical thing…”

New York-based interior and homeware designer Christiane Lemieux has an Auböck egg too – but hers is less functional paperweight, more tablescaping prop. “It adds curves to any linear surface and moves around my apartment, resting on stacks of vintage books, layering with warm wood tones and plaster sculptures,” she says.

It highlights a growing trend for object curation in contemporary interiors: “The tablescape and the shelfie are new design surfaces – and paperweights are the gateway to bolder sculptural pieces,” says Lemieux. This increased demand for artisan objects is being answered by makers and gallerists whose wares present an accessible entry point for budding collectors.

“There’s been a real surge in the past year or two of the antique dealer – or whatever I am – on Instagram,” confirms Toby Ziff, a photographer who turned his collecting habit into a business during lockdown last year, selling his vintage finds as Two Poems. “It was an excuse to spend more time on eBay finding beautiful things – and it’s just gone crazy. People especially love seeing pictures of my desk with 10 or so amazingly curated objects all together.”

What a lovely thing it is to have a tactile moment, a visceral experience from an object”

What unites Auböck’s pieces and Ziff’s selection is an interest in modernism; these are calm and considered forms that resonate with the same sublime simplicity as the sculptures of Constantin Brancusi and Isamu Noguchi (whose work is on show in a retrospective at London’s Barbican). “They are very quiet,” suggests Hertig of the prevailing aesthetic, which Auböck IV refers to as “sympathy in forms; you look at a piece and it doesn’t give you all the answers. This is what people like because it leaves some space open for their own emotions and ideas.” They are often handmade, which is also key to their appeal. “For me, our little sculptures are like friends,” says Auböck. “They exude life. They’re breathing.”

Ziff’s Two Poems mix ranges from £50 to £3,000. It might turn up brutalist coiled-iron candle holders and chunky ceramic trinket boxes as well as small modernist sculptures in wood or marble. “I’m particularly attracted to British sculpture of that time, to Hepworth and Moore,” he says. This month he will open his Hackney studio for by-appointment viewings. “Recently I had a set of three really beautiful geometric carved-wood sculptures from a house clearance. I put them on my story and the line was hot, as they say. I had a flurry of DMs within minutes.” The trio sold to a high-profile New York interior designer.

Fellow east London-based object obsessives Leah Forsyth-Steel and Victoria Spicer also launched online last year. As Monument Store they sell collections of vintage furniture and sculptural objects in an almost entirely neutral palette; the latest drop features a piece of studio pottery in “an arc-like, asymmetric form” (£240) and a series of stone works by the artist Fiona Goldbacher (from £790).

Touch is a recurring theme in the love of small objects. “What a lovely thing it is to have a tactile moment, a visceral experience from an object – especially if it’s on your desk alongside your computer,” says curator and writer Su Wu, whose collections of small objects in her Mexico City home are mostly the work of her husband, the sculptor Alma Allen. “In Alma’s work, there are all these secret moments – a sexy, bumpy feel, or a surprising weight. Wanting to touch them is part of the allure.”

As with vintage, the growing market is being fuelled by smart online spaces. “Sculpture is an insatiable request,” says Stockholm-based Helena Carlberg, who co-founded online-only gallery The Ode To three years ago. “We’ve seen a huge surge in demand for handmade objects.” While some adhere to overarching modernist mores – Hedvig Wissting or Noe Kuremoto’s organic ceramics, for instance – others are more playful, more colourful or more visually busy.

A complete guide to the healthy home
Back to business: how to create the perfect home office 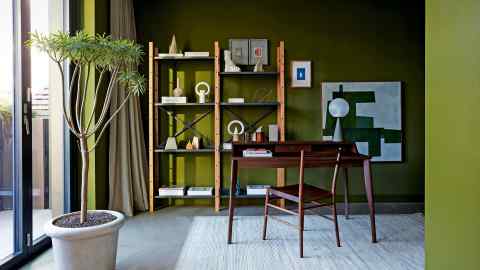 But whether what’s being brought to the table is old or new, stark or startling, curating objects together is all part of the fun. “I’m a minimalist maximalist,” says Ziff. “I love having objects that have a bit of breathing space around them, but I also just love having loads of things.” The Monument duo, meanwhile, favour a more sparse scenario. They have a heavy Carrara marble dining table earmarked as their desk for an upcoming studio space. “What will we put on it?” muses Forsyth-Steel. “Not a paper tray. Or a Post-It note stack…”

“Absolutely not,” chimes in Spicer. “It will be a desk as a statement. It can be beautiful and functional. I mean, you might need a tape dispenser – just make it a gorgeous tape dispenser.”