The world’s largest oil traders are rushing to plough billions of dollars into renewable energy projects in the next five years, as they speed up preparations for a dramatic shift in the world’s energy mix.

Marco Dunand, chief executive of Swiss commodity trader Mercuria, said the company was investing $1.5bn into projects in North America with private equity partners, while Torbjorn Tornqvist, chief executive of Gunvor, said he planned to commit 10 per cent of the company’s equity — hundreds of millions of dollars — over the next two years.

“If you want to exist in 10 years’ time and don’t want to be in renewables then I think it is going to be tough,” Mr Dunand told the FT Commodities Global Summit. “We don’t have a choice” but meet the Paris climate goals, he said, calling it the world’s “biggest challenge”.

The moves illustrate how trading houses that are deeply entwined in the oil market now want to play a bigger role in solar, wind and hydrogen, which are expected to meet a growing chunk of energy demand over the next decade.

“Over the next five years we should have about 50 per cent of our investments into renewables,” said Mr Dunand.

Vitol and Trafigura, who round out the “Big Four” independent trading houses, are also looking to bulk up in renewables and power.

The trading houses still caution, however, that they do not expect an imminent peak in oil demand, despite projections from companies such as BP that consumption is close to topping out, because they believe developing economies will keep driving growth over the next 10 years.

That is leading them to pursue a twin-track where the core oil trading business still accounts for the vast majority of their revenue but where they are making preparations for a shift should demand growth falter.

“I don’t believe in a zero-carbon future; that is a target that just won’t work,” said Mr Tornqvist, highlighting that 80 per cent of the world’s energy mix is fossil fuels-based. “We need to look for a low-carbon future, not zero-carbon because you are going to aim for something that is impossible [to achieve].”

Russell Hardy, chief executive of Vitol, said the company already had about 500 megawatts of investments in renewables that were either operational or set to come online and a “similar pipeline we’ll invest in over the coming years”. 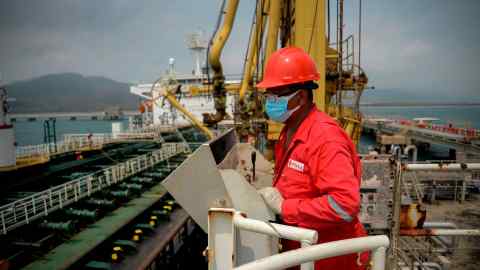 At the weekend Trafigura revealed plans to build or buy 2 gigawatts of solar, wind and power storage projects over the next few years. It expects to invest roughly $2bn by 2025 in partnership with a big infrastructure investor.

Mr Dunand at Mercuria said the biggest energy traders, which have at times been targeted by environmental campaigners, needed to play a big role given their size and experience. “For a proper energy transition we believe that you need a company like ourselves to commit capital and knowhow to help this transition,” he said.

The trading houses’ growing interest in renewables coincides with fewer opportunities in the oil market. While the first half of the year created bumper profits for many traders, with the pandemic creating wild price swings as demand collapsed, the coming year is expected to be less volatile.

Mr Hardy said he had only “modest expectations” for the oil price in the second half of the year, saying it might go “up a bit” from its current level near $40 a barrel. Mr Dunand said he saw prices about $45 a barrel by the end of the year, while Mr Törnqvist said it would take until the “middle of next year” to potentially get to $50 a barrel.

Jeremy Weir, Trafigura’s chief executive, who was also speaking at the summit, said he could not see oil prices rising significantly over the next six months.

On renewables, he said there was a desire from “inside” Trafigura to build a “third pillar” to stand alongside core oil and metal units.

“Typically there is a lot of competition for renewables and the equity returns relative to other investments are lower. But we’re comfortable with what those returns are,” he said.