If you think the same, join us
How To Spend It Beauty

How a French fragrance maverick changed the course of fragrance history

For Frédéric Malle, the possibility of losing his sense of smell to Covid-19 is one of the most alarming things about the pandemic. “Holy shit, if we ever get that we are in trouble!” says the founder of Editions de Parfums Frédéric Malle, on the phone from outside his family home in Biarritz. “The only way to go on without a sense of smell would be to have someone very good at speaking our language and smelling for us, as if explaining what they see to a blind person.”

Of course, that’s exactly what Malle is to his adoring fans and customers – an olfactory interlocutor, if you will. Twenty years ago he set up a fragrance house and invited some of the world’s best noses to create scents alongside him. He launched with six fragrances – a niche edit of beautiful yet unusual perfumes. The collection has since grown to 32 and includes some of the most sophisticated scents in the business: Le Parfum de Thérèse by the legendary nose Edmond Roudnitska was created in the 1950s, but was entrusted to Malle to produce commercially by Roudnitska’s widow (Thérèse). There were later collaborations with Alber Elbaz and Dries Van Noten. Everything from the Malle stable feels unexpected, while his shops, designed by the likes of Andrée Putman, Jacques Grange or Jakob+MacFarlane, with their immersive “smelling columns”, have brought a rare sense of excitement to the perfume-retail space.

Malle founded the brand almost by chance. Until he came along, the fragrance business was choking in a cloud of cloyingly sweet concoctions – Estée Lauder Pleasures, Britney Spears’ Curious or Jennifer Lopez’s Glow were the big hitters of the 1990s and early 2000s. Even today, the creation of a scent is a somewhat generic corporate experience where a fashion brand, usually under licence to a beauty giant, will go to one of the five or so big global fragrance laboratories and ask them to submit ideas for a new perfume based on a consulted brief. The process is about as romantic as launching a new washing powder. And it was a process Malle was determined to disrupt.

“Perfumers were getting angrier and angrier because they weren’t working with people they respected,” he explains. “They were working with brands where those who knew the business really well had been replaced by those who had been selling cat food and knew nothing about perfumery. Then, there were friends of mine in publishing, in the art world, in cinema, in Paris who weren’t wearing perfume any more, because it meant choosing between smelling like their grandparents and their wonderful Guerlain fragrances,” he chuckles, “or smelling awful.”

Malle helped usher in a new commercial landscape, a house dedicated to fragrances that filled a gap in the market for more unusual scents: Bigarade Concentrée by Jean-Claude Ellena, with its bitter-orange cleanliness, or Vetiver Extraordinaire by Dominique Ropion, a masculine whisper of sandalwood and oak moss. Moreover, he set perfumers at the centre of the creative business – putting the name of the noses on a bottle was unheard of before. His influence has been significant. In the years since, other artisan perfumeries, such as Byredo and Maison Francis Kurkdjian, have flourished. And, without Malle, it’s unlikely many of the bigger houses would have created their own “edited” lines – Chanel’s Les Exclusifs, Maison Christian Dior and Armani’s Privé to name but three. The Estée Lauder group snapped Malle up in 2014, adding him to its growing stable of boutique fragrance houses, which includes Jo Malone, Le Labo and By Kilian.

Prior to launching his own label, Malle was an industry insider. He started his career at the prestigious perfume laboratory Roure Bertrand Dupont in 1988, as the assistant to Jean Amic, the perfumer behind the 1977 classic Opium by YSL. He was driven to start his own brand when, while working as a consultant for Christian Lacroix, he got into an argument with the photographer Irving Penn. “Penn didn’t like the idea I’d come up with for Lacroix and wanted something that felt more modern, more Bauhaus,” recalls Malle. “I saw him making the exact shape with his fingers of the bottle I was toying with in my mind for my own project. That reassured me. I’d grown up loving his images, and finally there he was in front of me, talking about what I loved.”

After this lightbulb moment, Malle approached the “angry” perfumers, drawing up a short-list based on conversations with the technicians and creatives at Roure. “Voltaire used to say brilliant people talk about ideas; average ones talk about things; and silly ones talk about people. We were generally a mix of average and silly. We loved Pierre Bourdon for his modernity (and the creation of Davidoff’s Cool Water, which 30 years later is still probably the most imitated men’s fragrance ever); Jean-Claude Ellena was seen as the continuation of Edmond Roudnitska, praised for his minimal work and bringing a sense of transparency to perfumery; Maurice Roucel was bold and generous and big and super-sensuous; and there was Edouard Fléchier, who was one of the best. I didn’t need to think about the list for more than 10 seconds.”

“The project was really nice,” recalls Ropion, the nose behind commercial blockbusters such as Lancôme’s La Vie Est Belle and Thierry Mugler’s Alien. Malle likens his olfactory style to that of “a daredevil perfumer who could jump off a cliff but land well”, someone he saw as “hope” for the industry. Ropion was persuaded by Malle’s dedication to the art. “There were no price limits,” says Ropion, whose big successes with Malle have included Carnal Flower, with its lustful tuberose, and Portrait of a Lady, which has 400 rose flowers per 100ml, combined with patchouli and cassis. “There were no marketing people. It was just between the artist and the artistic director, Frédéric, who was a very good aesthete. We had all seen L’Artisan Parfumeur, and Annick Goutal, but this felt completely new. Even so, I never expected it would have such success internationally. We just make the best perfumes we can.”

Malle is the first to point out this wasn’t actually a new way of working. “Just to be modest for a second, all I did was go back to the beginning of the system, when perfumers like Guerlain, Piaget and Caron sold perfumes that smell different; specific perfumes that would not please everybody, that would have zero image, with the same bottle for every single scent, so that the mind is focused on the juice itself rather than the bottle, and sold in stores with extraordinary service.”

Malle’s return to more traditional methodology came at the right moment. “The idea of the perfumer of years ago is highly appreciated by a small segment of the population that values the craft,” says Theo Spilka, global vice-president at the international fragrance laboratory of Firmenich. “I don’t know how disruptive it is, but it certainly addresses a recognised white space in our industry.”

Malle was always predestined for a life if not in perfumery, then in the arts, with a childhood steeped in outlier credentials. His father produced the films of his uncle Louis Malle (“We could walk into most cinemas in Paris and flash a card and get in free!”); his grandfather Serge Heftler-Louiche founded Parfums Christian Dior, while his mother Marie-Christine Heftler-Louiche presided over that department as art director. “We didn’t have much by way of the sandpit-and-park experience because my mother found those boring – she preferred to roll the buggy in the Louvre instead.”

What of the next 20 years? With such an innovator, the expectations are high. Spilka thinks one of Malle’s biggest achievements was to bring back the concept of the perfumer working as shopkeeper, “someone who created a unique approach to selling perfume in an artistic way, which we hadn’t really seen since the olden days of Floris, Guerlain and Penhaligon’s. Malle’s shops made customers feel like they could learn everything about the product, developing a passion for the perfume that spoke to them.” And even while Malle was the first to launch fragrance as e-commerce, Spilka senses that, in this area, he still has room to grow. “His move to Estée Lauder group has not been especially successful in that respect, not a great deal has been invested in his ‘storefront’, direct-to-consumer footprint. I’d like to see Frédéric get much more involved.”

How To Spend It
What scents do Stella Tennant, Jean Nouvel and India Mahdavi wear? 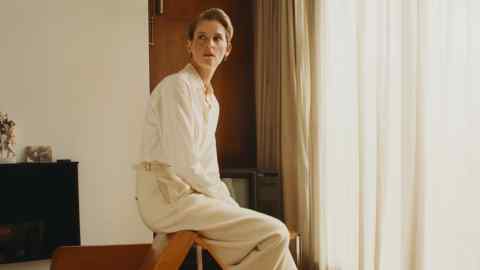 As for Malle himself, he has work to do. “I’m proud to have participated in the revival of this industry,” he says, “and I’m longing to see surprises, as it’s the young perfumers coming from different countries who will now ultimately redefine our business. There’s a whole generation of perfumers in their 40s who are not very good because they were constantly asked to make flankers [sequels] for the bestsellers, whereas the previous-generation perfumers were great at making them from scratch. The new generation in their 20s grew up looking at the classics, the smaller brands and Les Exclusifs by Chanel and so on. They are ambitious, and they are very good technically,” says Malle. “Time will tell if they are artists or not.”

That and whether we see their names on one of his bottles.